Today it was raining and the small amount of toys we packed with us for our travels are evidently becoming less intersting by the minute. So I made a batch of play dough and we played with it “Italian Style”! 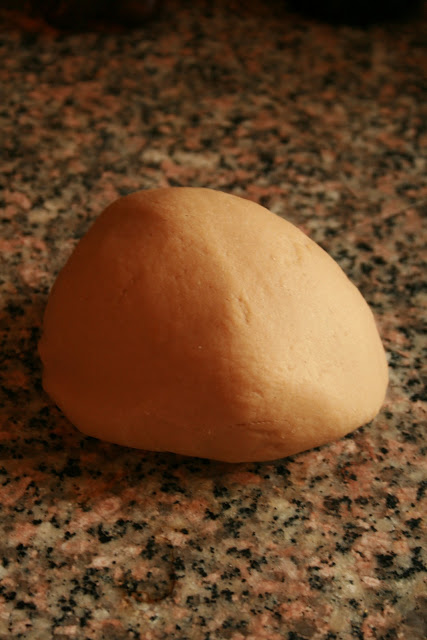 I didn’t have all of the right ingredients, so I made this by substituting cream of tartar for a squeeze of lemon juice and the food colouring for a teaspoon of instant coffee dissolved in a cup of boiling water. I wanted it to look a natural colour anyway so that helped! 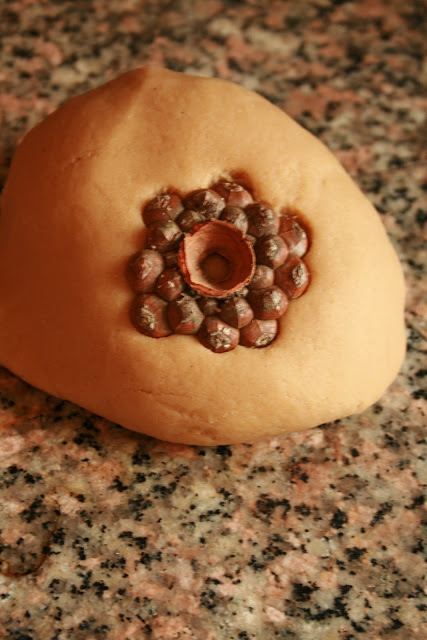 We used some of the things that she has been gathering during our walks and made imprints and impressions into the dough. This was the top of a pine cone. It made lovely patterns, each side being different. 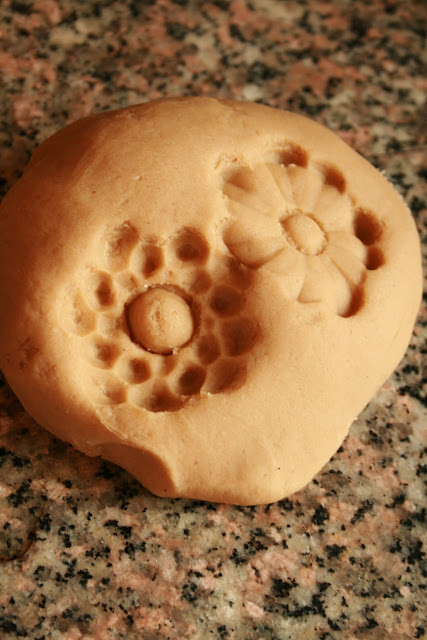 Then she had a go at sticking in indiviual pieces from the pine cone and it looked like she was making her own little cone sculpture! 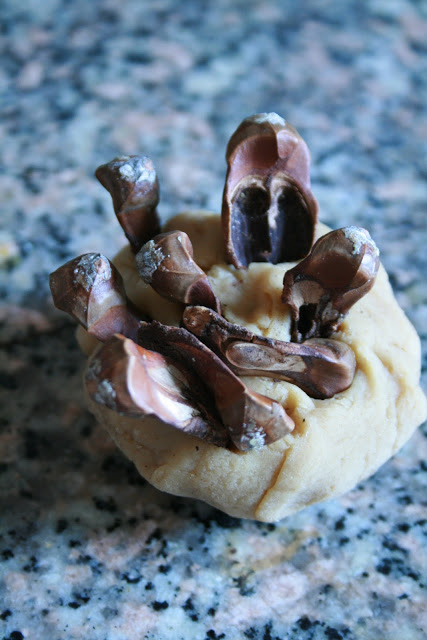 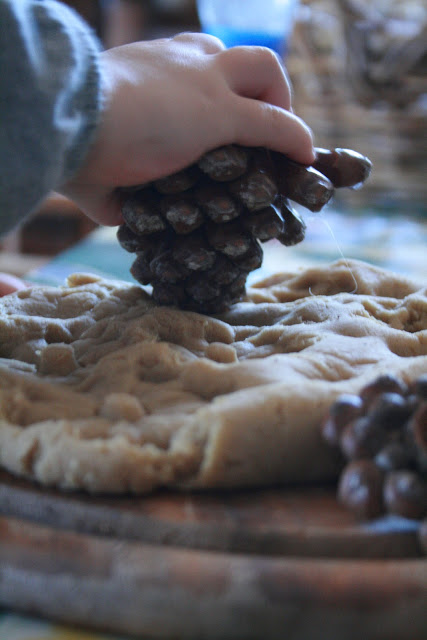 She then tried adding other things such as the needles from an Umbrella Pine branch we had found. 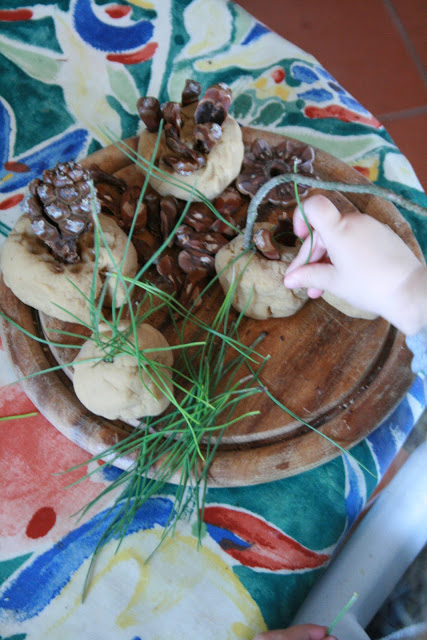 Quite a little nature table began to emerge! Then I remembered how much she had loveld making the playdough cupcakes last month and I though, while in Italy, we really should do some playdough pizzas! 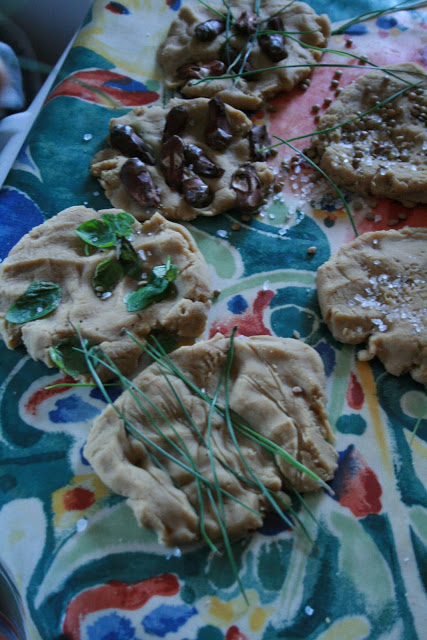 I helped her squash and flatten the balls of dough into rounds, then found some dried lentils, fresh basil leaves and rock salt and let her arrange them onto her pizza bases. The results were beautiful! (and yes, she ate some, again!) I can’t imagine what coffee flavoured, salty dough must be like, apart from disgusting! 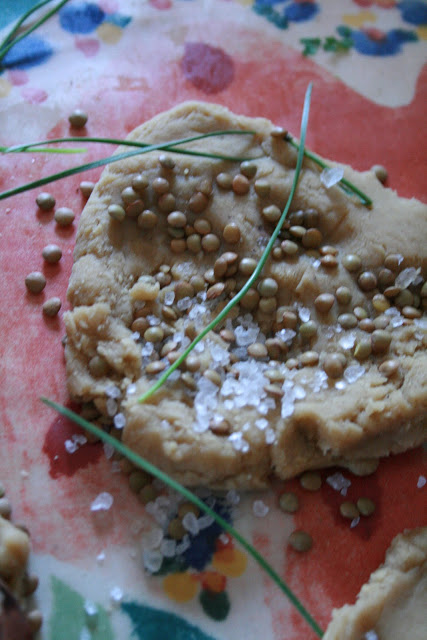 Then the rain stopped and we moved our little cooking party outside to the flagstones outside the house. We cooked the pizzas in the real pizza oven attached to the house and served them up to each other on little rustic plates (made by a potter in the nearby village.) My brother made real pizzas in this oven in the summer and they were out of this world! 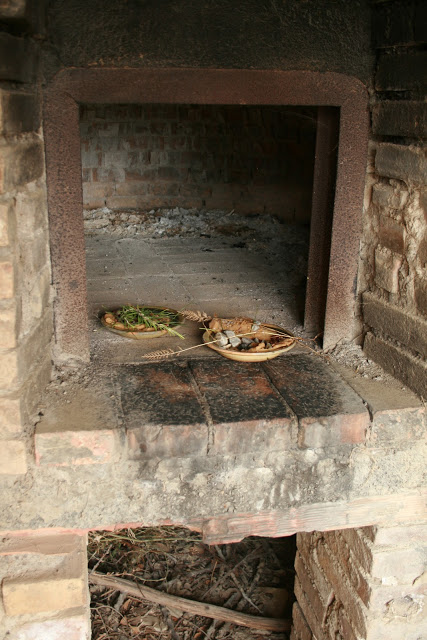 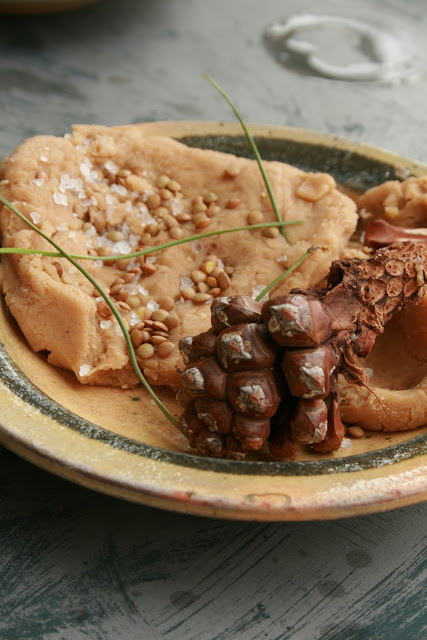 “One pine cone and needles pizza coming riiiiiight up!” 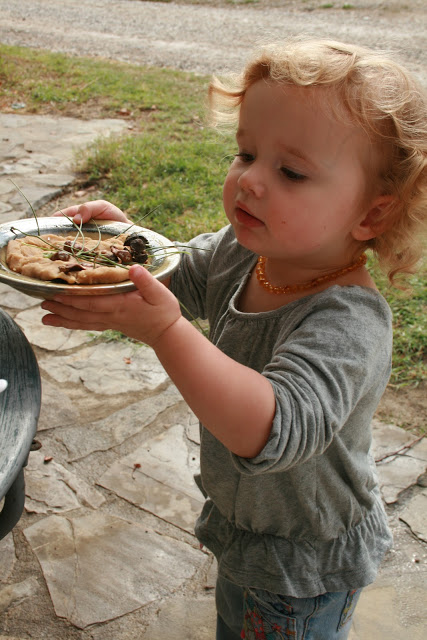 A few geranium petals anyone? 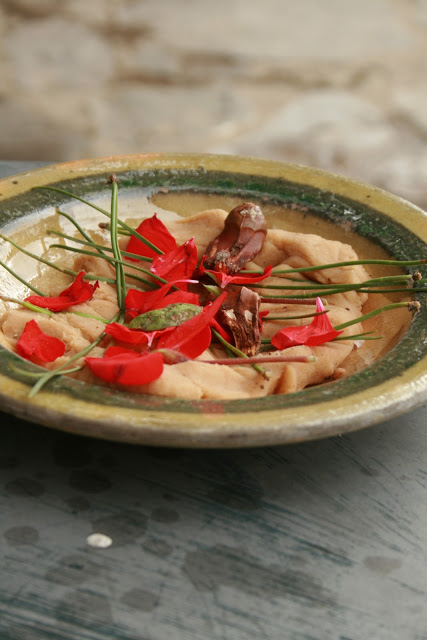 Ah, the joy of being able to watch the passing tractor traffic whilst playing outside. Perfect! 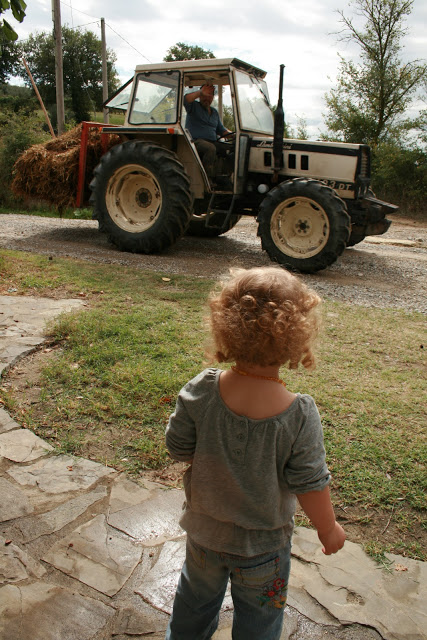 And as we digested our pizzas we went for aonther long walk. This time to look at Pampa’s olive and walnut trees (and to collect more flowers and pebbles too of course!) 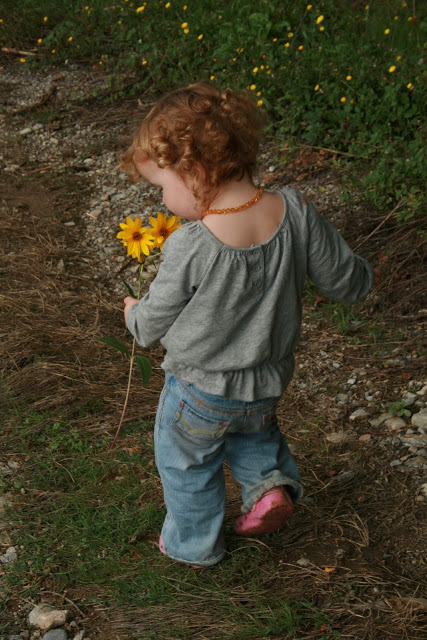 It was a long walk and little legs got very tired! Little Pop got to ride in the sling with Mummy (and thankfully we didn’t fall in the mud although we nearly did a couple of times.) 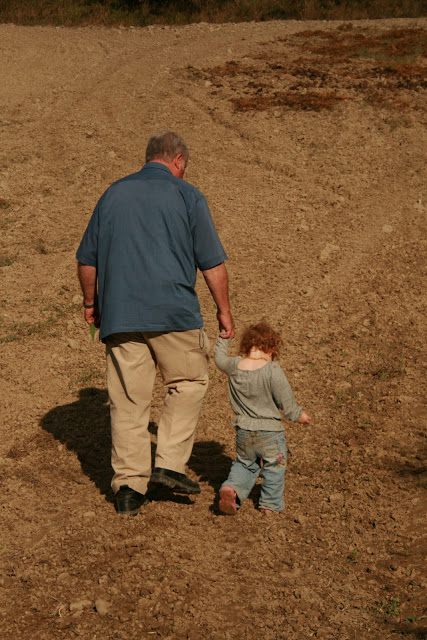 Mummy and Pop in the shadows! 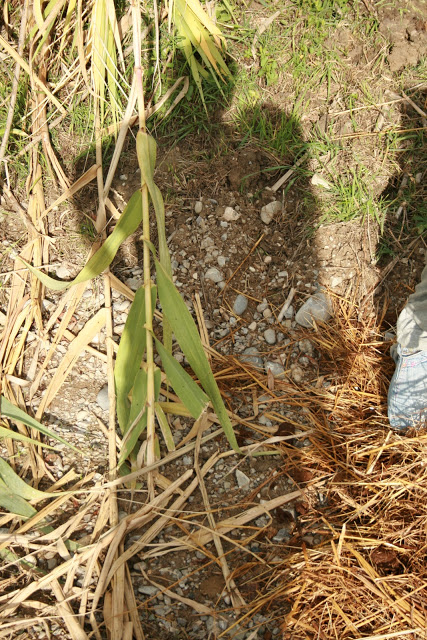 Some of Pampa’s wonderful olives ripening. They should be ready for harvesting and turning into oil during November. 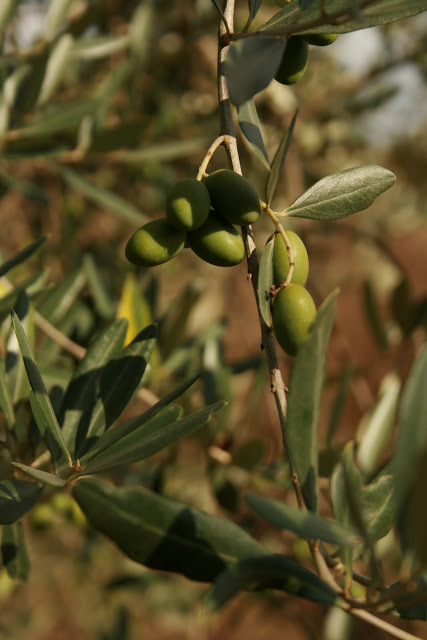 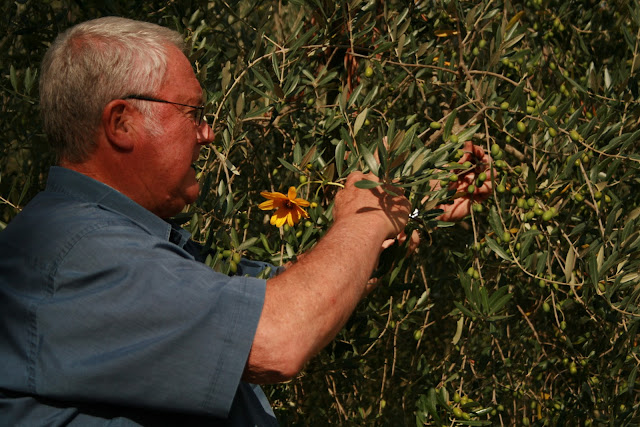 And gathering walnuts from the tree by the house. 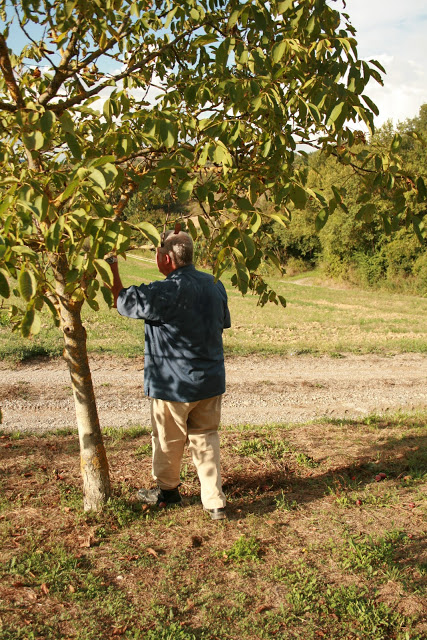 And even though we are missing Daddy (a lot) we are having a wonderful time enjoying the Italian countryside and pace of life. 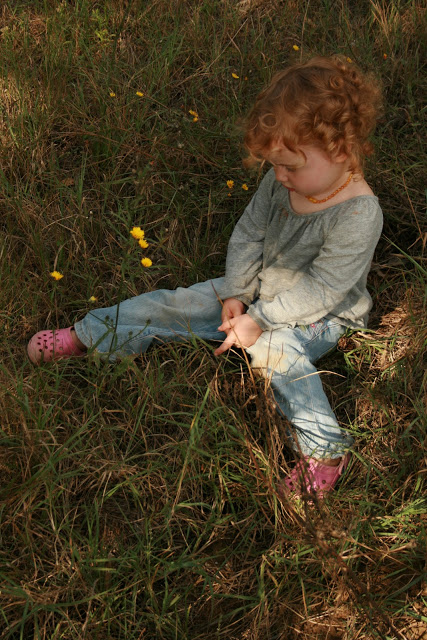