Cakie has been interested in drawing for a long time. She did her first little painting when she was about 6 months old and has been at it ever since, tasting and experimenting with a wide range of media! 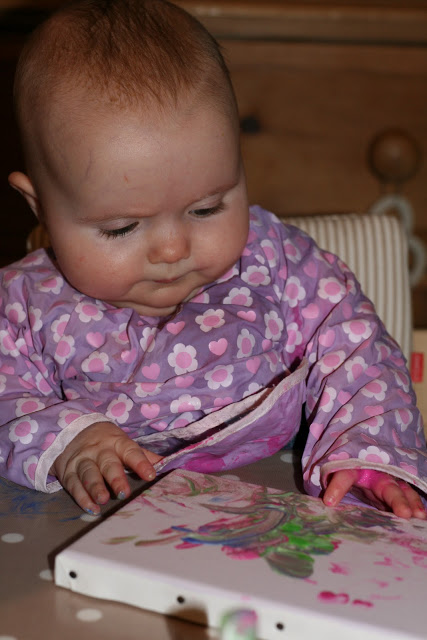 (Cakie at 6 months old….awwwwwww!)
Recently she has been asking us to draw things for her on paper and her magna-doodle (a very popular gift from Aunty Myfanwy!) Daddy is very good at drawing and has made some wonderful sketches of her favourite characters and foods (food features high up the list of requests!)

As we have been drawing with her, the same requests have been repeated over and over again until we have realised that these things are SO important to her. I thought it would be fun to make a little “toddler mind map” or “thinking doodle” to record what is going on in her little brain. It makes for quite a funny picture! 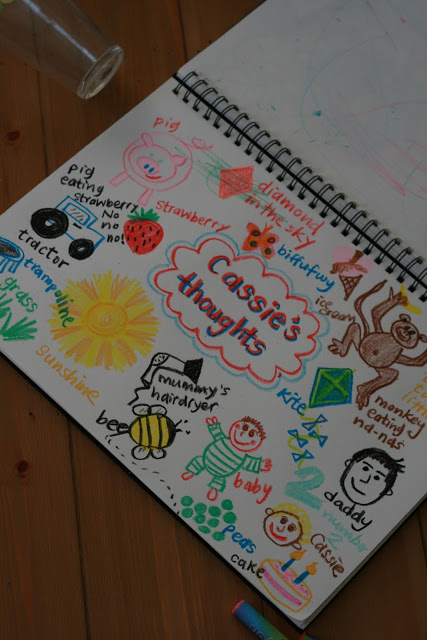 She often asks for family member to be drawn, including herself. She always laughs as I draw her curly hair and names each body part as I draw it. Some of the requests come with a song, such as the cake. This is always “draw cake?” “and as I draw there is a little voice accompanying my doodle in the background. “Appy burfday to yoo, appy burfday to yooo, appy burfday Asshie!” followed by “two candles” and lots of blowing out. She likes to sing Twinkle Twinkle too, and requests various parts of the song on paper. The hair-dryer is interesting because she is terrified of it. So I’m thinking maybe I should start a book of scary noisy things (that aren’t really all that scary) and also include the DREADED Dyson and the blender!

I might do one of these with her every month and then look back at how her little thoughts have developed over time. Maybe in a few months “oh no! pig eating strawberries!” won’t be the most terrible thing that can happen anymore (although wouldn’t life be great if it was?!)