Use building blocks to create some picture cards of models and patterns for kids to copy! A great maths activity for preschoolers that can be simplified for toddlers and extended for school age children. 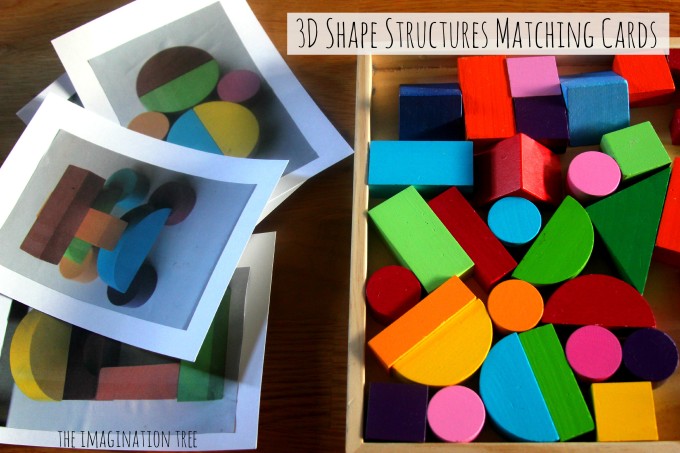 The next material in our collaborative Playful Maths series, co-hosted with Learn with Play at Home,  is building blocks, a material that most people will already have in their home or educational setting. There are countless possibilities for patterning, sequencing, counting and sorting using shaped blocks, all of which are vital early maths skills. Today’s activity focuses on the ability to recognise, match an recreate a three dimensional shape model, following a picture pattern card. All that you need are some solid shape blocks, a camera and a printer. 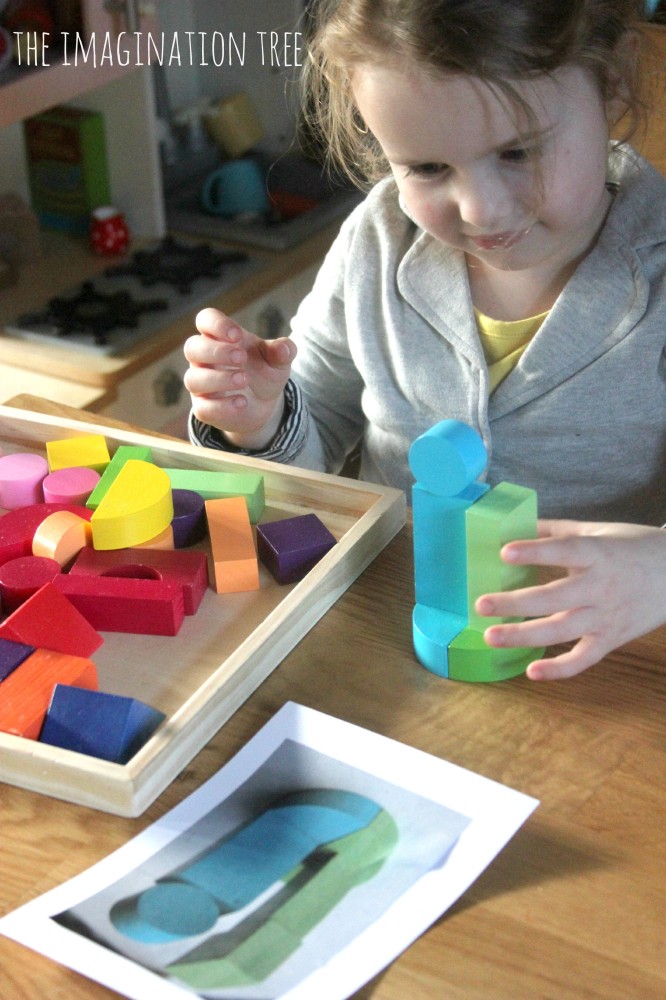 First of all I built some models using our coloured shape wooden blocks, some fairly simple, and others that were more complex.The more difficult ones used colours in similar shades, balanced shapes unusually or were created using many layers. I took a photograph of each one individually, then printed them out and stuck each one onto card. 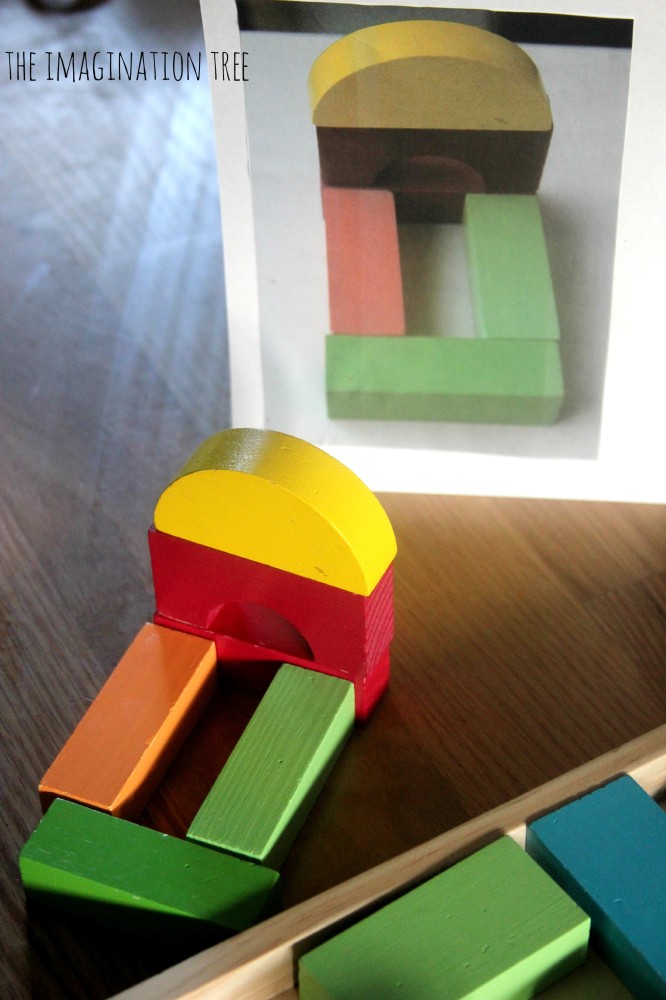 Cakie didn’t need any explanation for this activity as the picture cards spoke for themselves. I set it out as an Invitation to Play and she chose a card to try first and found the corresponding blocks to start building with. I as surprised at how easily she managed it and realised that we needed to make some much more complex examples to add to the card collection! 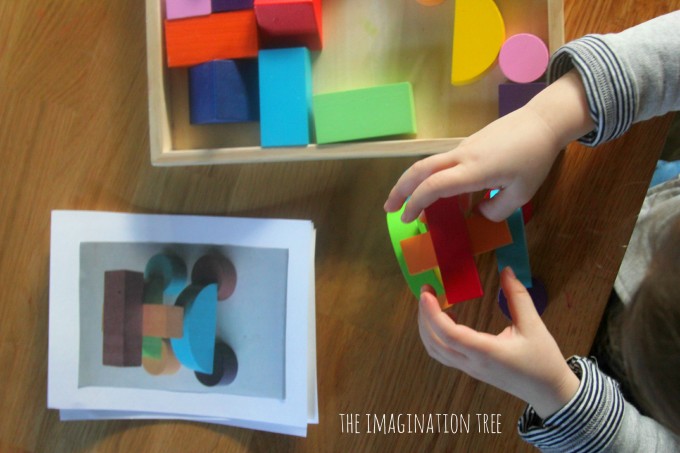 As she played I tried to get her to talk about the names of the shapes that she was using, and if she didn’t know, to discuss their properties in terms of numbers of sides and faces, their overall shape and appearance. I was able to introduce some new mathematical vocabulary at this stage. 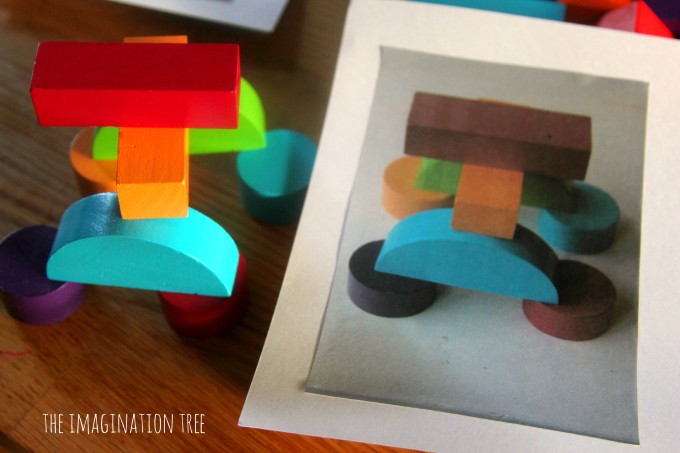 When she finished all of my example cards, she started to construct an entire city using the blocks, then said “take a picture of this so someone else can try and copy it!” She also said that she wanted to try and build it again, from scratch, after seeing the photo later on!

The next natural step for this activity is exactly this, asking the child to design and make their own models, and even photographing them and making them into picture cards by themselves. Another idea is to make larger models together and then play an “I Spy” game with the shapes that have been used. For example” I spy with my little eye, a shape that is round on one side and straight on the other, with two corners.”

Can the partner point to the shape? And better still, can they name it too? 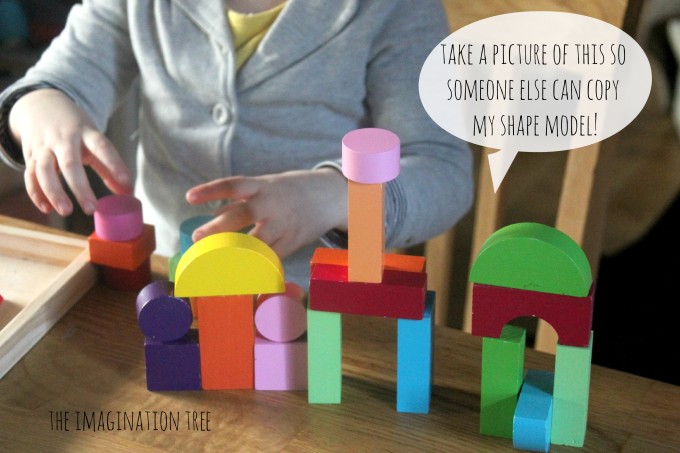 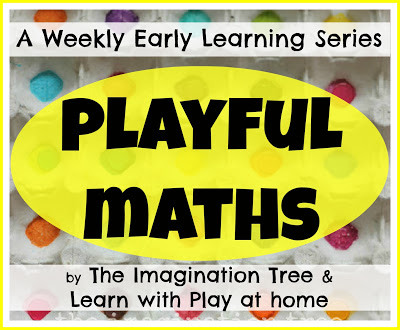 Pop on over to Learn with Play at Home to see her ways to explore blocks post today!

Explore the rest of our series!