Create a homemade pirate party for kids with recycled materials and lots of creative good fun! 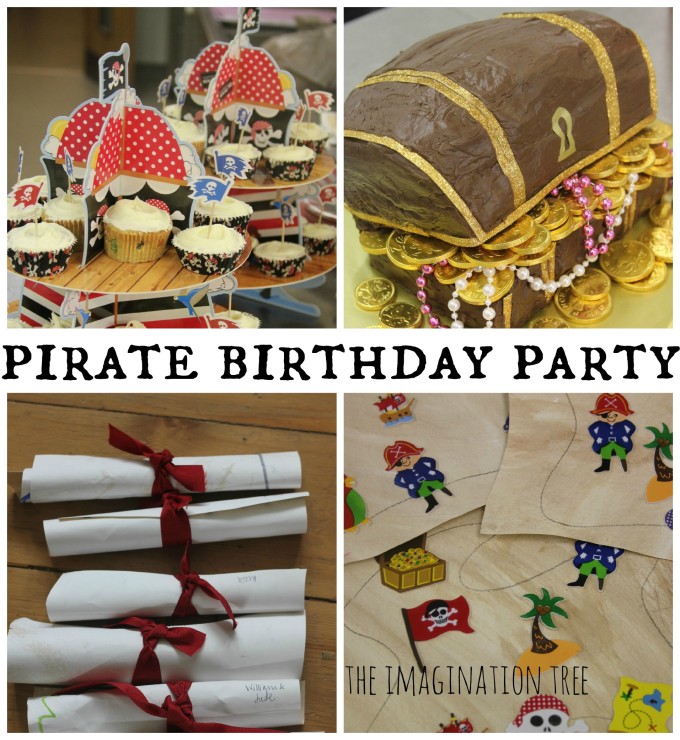 We recently had a pirate themed birthday party for Pop’s third birthday, which she has been requesting for the past 6 months! As with all our parties, I like to try and make as much of it as possible from scratch, without going too over the top or spending too much money, and for there to be plenty of activities and crafts to keep the kids busy and playing. I don’t personally think you need to hire an entertainer at this young age as they are so happy just to play  together and enjoy each other’s company! 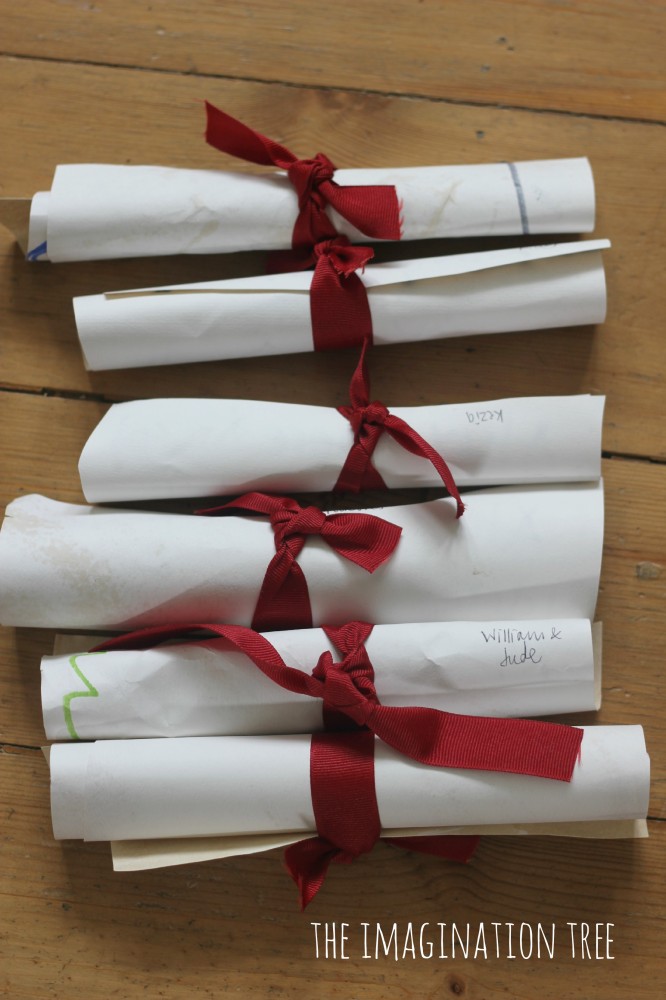 Because of the awful weather and not having enough space in our home, for the first time ever we hired a local hall space. I painted lots of sheets of black A4 card with white paint, to create a simple skull and crossbones design. We stuck these onto black wool and strung them around the room to make paper bunting. My talented friend Katy sewed some nautical coloured fabric bunting triangles too, and these looked gorgeous around the kitchen hatch. The rest of the directions were simply lots and lots of black and red balloons, some on sticks for easy take-home gifts and some free for playing with. 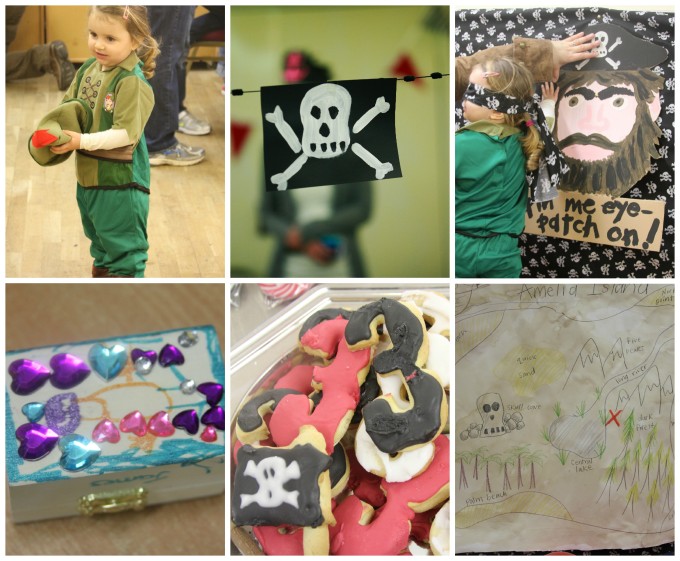 On arrival there was a table full of cardboard tube telescopes so that each child could collect one to use in some prate play! To make these I simply painted lots of wrapping paper rolls with black paint then added some gold trim with more paint once dry. 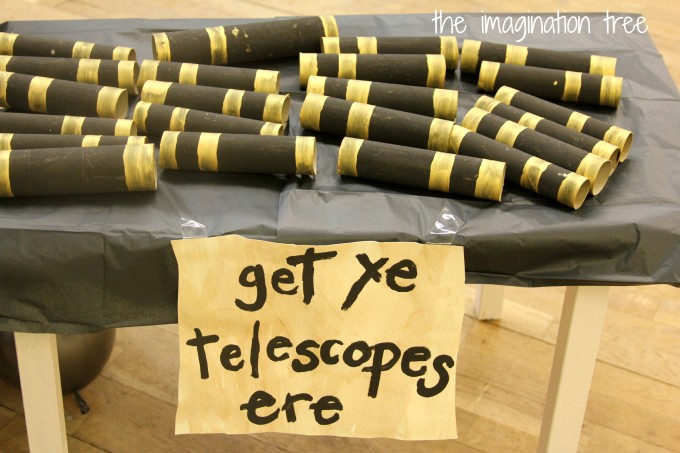 We set up some tables with free choice pirate-themed activities on. On the first were some little plain wooden treasure chests ready for decorating sung pearlised paint pens and acrylic self-adhesive jewels. This was a really popular table! The kids used the chests to store some gold coins that they found in a hunt later on. 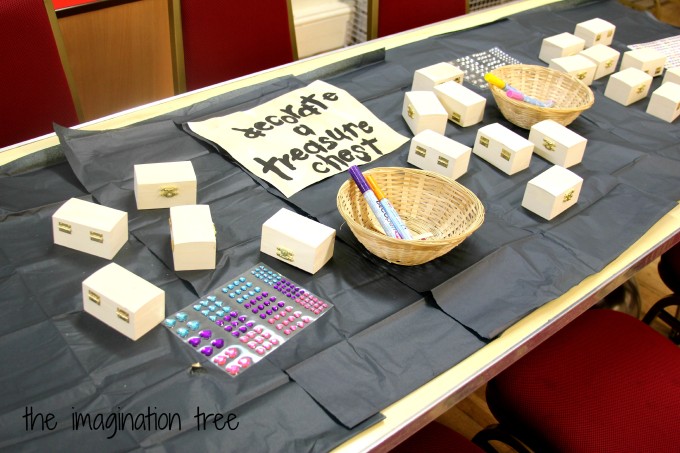 On another table were some blank treasure maps ready for drawing and decorating. We made these by staining a large piece of wallpaper lining roll using string black coffee and a paintbrush. Then we cut them into slightly rough-edged ap shapes, and simply laid out some pencils and some funky pirate themed foam stickers to create them with. 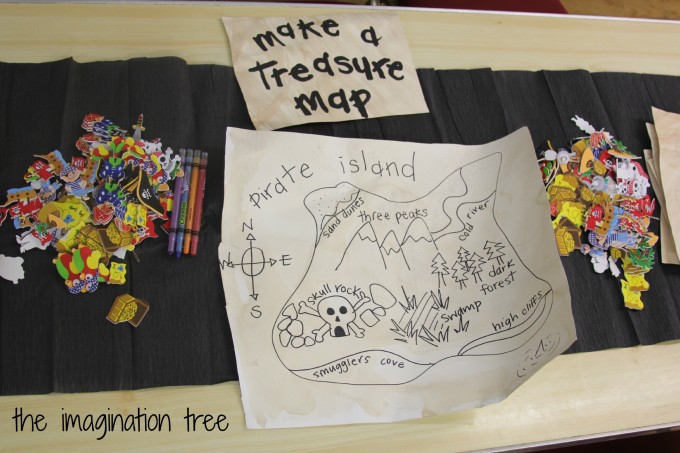 The final craft activity was threading pirate jewel necklaces and bracelets using coloured wooden beads and thin pipe cleaners, which would be strung together and twisted to make various shapes.

On the wall I stuck a large pirate head that I had painted onto a cardboard box and we used this to play Pin the Eye-Patch on the Pirate! Each child was blindfolded and then had to try and patch on a cardboard patch to either eye. We marked each child’s attempt and the winners were the ones who got it the closest. 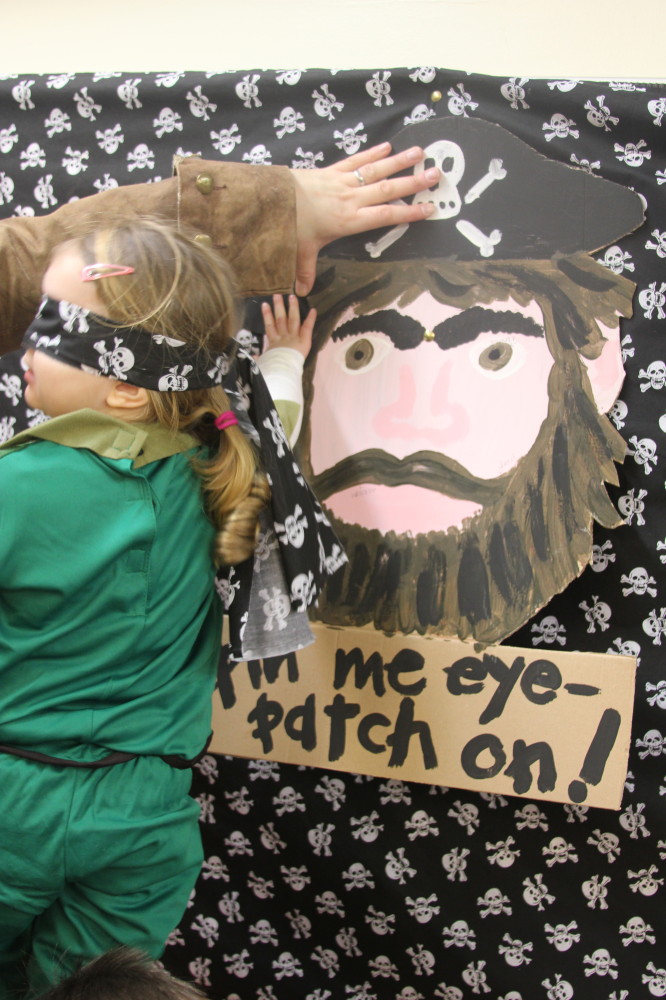 We played pass-the-parcel (of course!) but instead of a sweet in-between each layer , there was a pirate eye-pacth for them to put on and play with.

Next we played Hop on the Islands, where we laid down lots of yellow pieces of card to represent islands on the floor and each child had to jump on one. As the music played they danced around the islands in the sea full of scary sharks, then when the music stopped they had to hop back onto an island to be safe. We took away one each time until only one island an one child remained as winner!

Next we set off on a treasure hunt around the room, following a pirate treasure map I’d made on the same stained paper, with X marking the spot! We tracked through imaginary forests, up hills, through swamps, 5 paces ahead, 6 to the right, around Skull Rock and 10 paces left until we found the treasure chest hidden in a cave (aka under a table!) 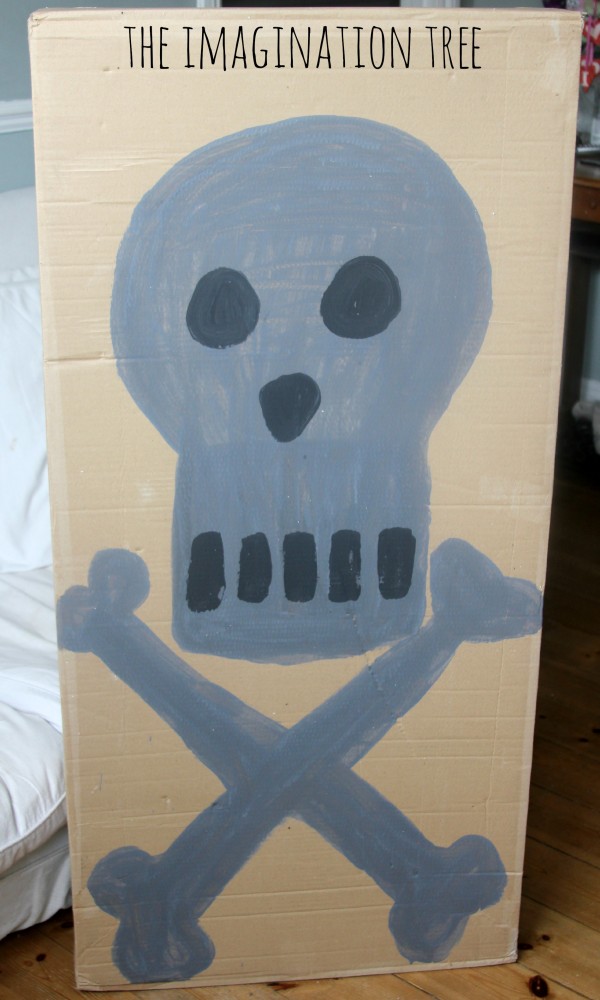 The treasure chest was full of gold plastic coins, real jewellery from the £1 shops and plastic rings and necklaces. There was a total scrambles at this point to fill pockets and treasure chests with the loot! This picture shows the chest after the party, totally battered! [This was made from a box just like the instructions in this DIY Pirate Treasure Chest tutorial we have shared previously.] 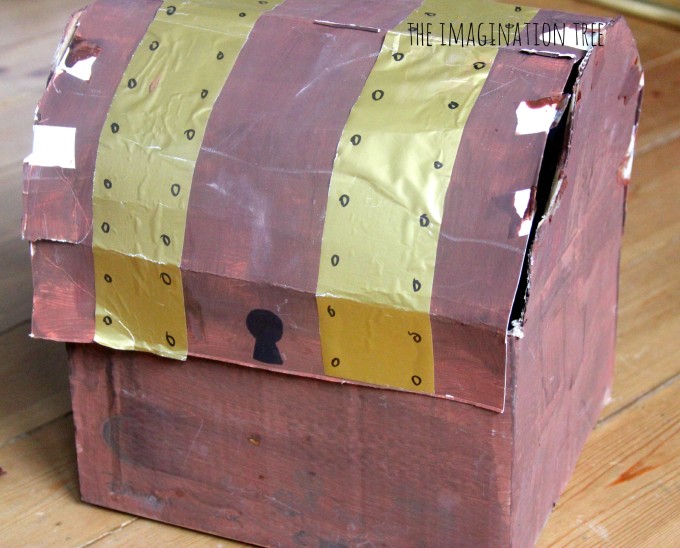 The loot ready for grabbing! I had also bagged up lots of collections of jewellery, coins and trophies into little clear gift bags to hand out at the end,  incase some kids didn’t get an equal share, which is often the case with these sorts of games! 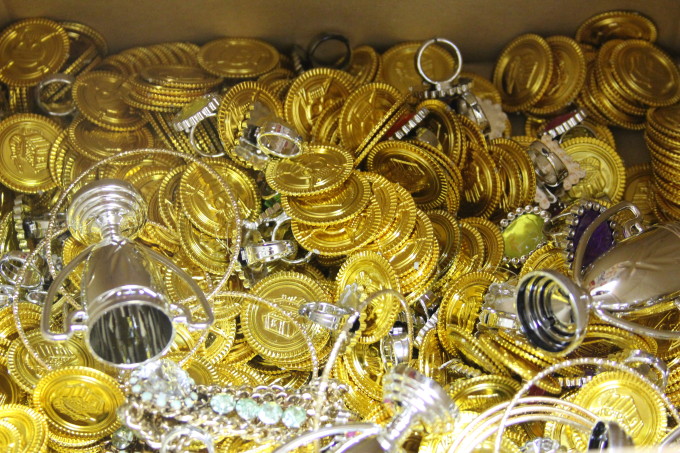 Next came time to eat the Pirate Grub! The usual party spread of sandwiches, cut fruit and vegetables, crisps and biscuits was spread out for them to dig. My lovely friend Katy (who helped massively with the party) made some gorgeous cupcakes which we popped on a cardboard pirate cupcake stand. [See collage pic above.] 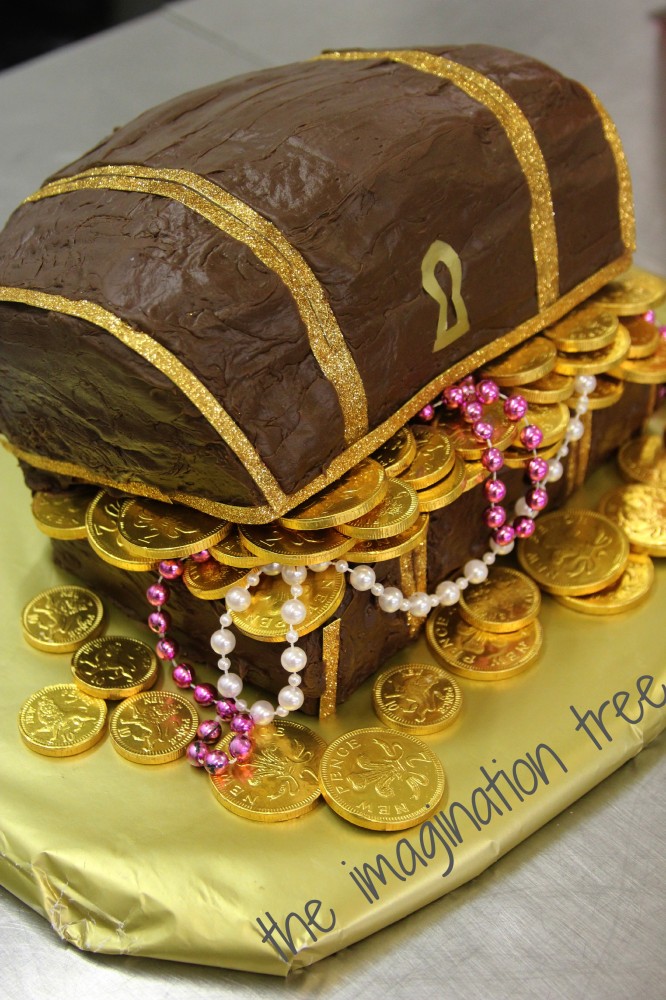 The birthday cake was a treasure chest, at the birthday girl’s request, which I made by baking two square madiera sponge cakes and cutting and fitting them together to make the right shape, then smothered in chocolate icing. Coming out tof the middle were chocolate gold coins and plastic necklaces, with gold paper edging to mark out the brass work on top and sides. I will write a full tutorial on this at some point soon. 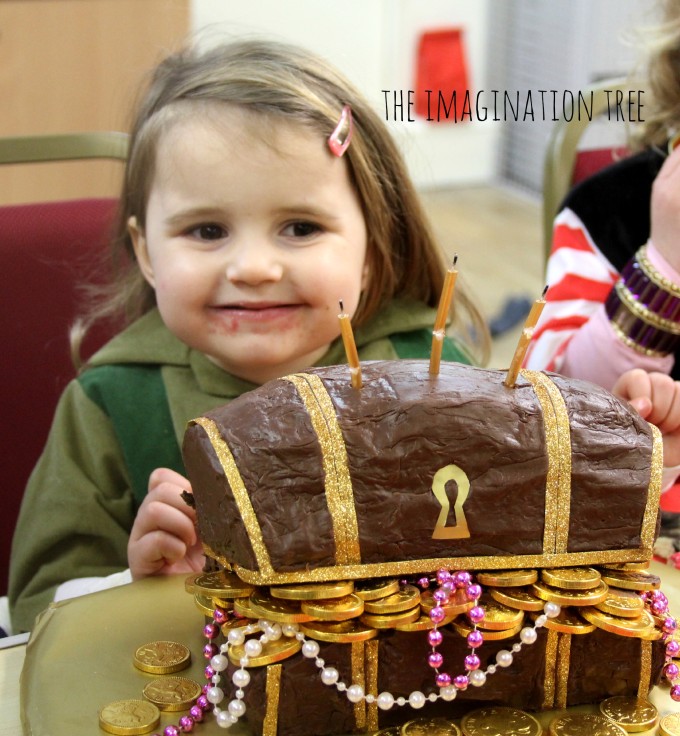 Mr Imagination Tree and I got right into the part, dressing up and having just as much fun as the kiddos!  Ha Haaaarr Me Hearties!! 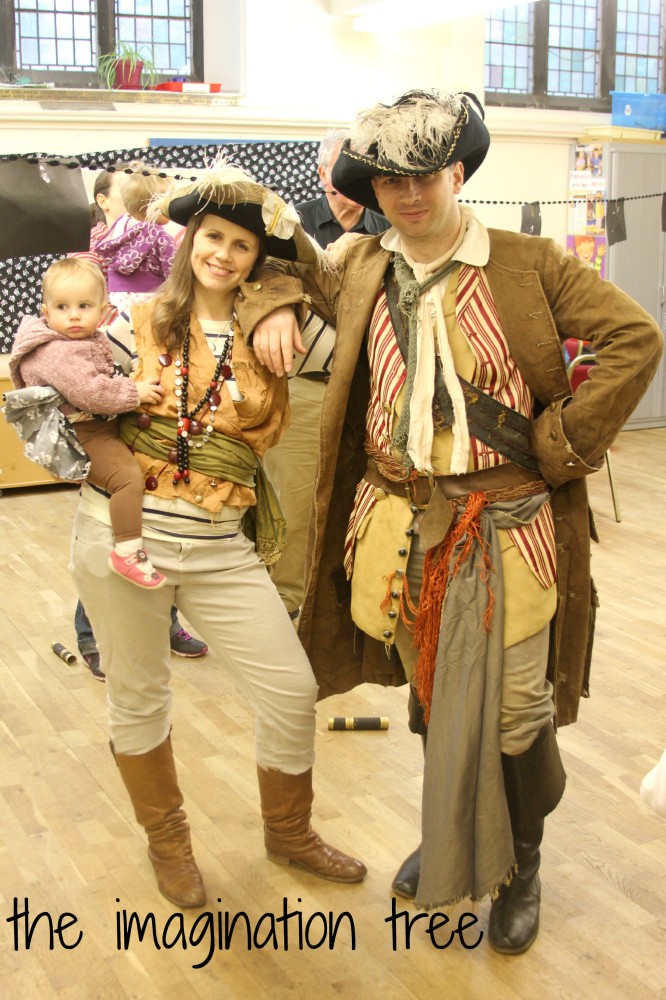 When it was time to go home, we gave each child a “treasure token” which was a symbol drawn onto a square of cardboard. Each child had a different one and it matched their going home party bag which was hidden somewhere around the room. They did a last treasure hunt dash to look for their own bags and had fun discovering what was inside. These contained a retractable telescope, pirate notebooks and pencil, chocolate gold coins pirate puzzles and games, as well as the bags full of treasure from the large chest. 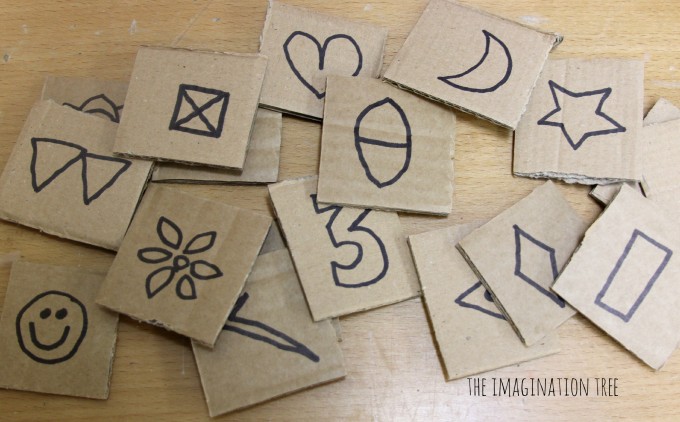 It was lots of fun and we had great help from our fantastic friends Katy, Tineke and Yasmin. Where would we be without our buddies at these occasions?! 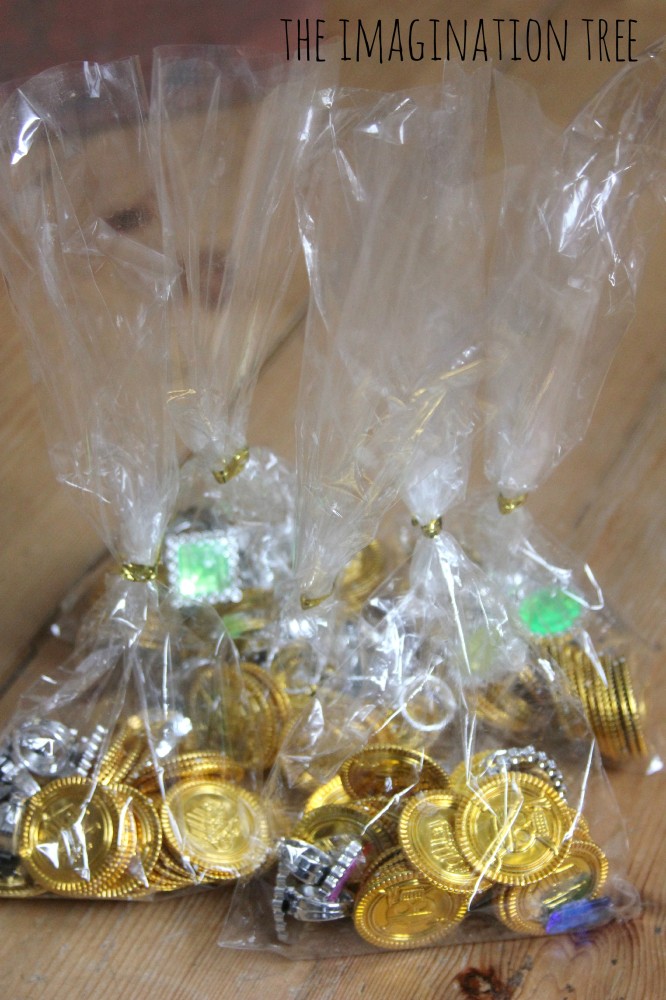 Here are more Pirate Ideas too: