Make a cardboard box small world play using just one box and toys you already own. Just one box makes three different play scenes and is brilliant for a travel toy too. Such a great idea for imaginative play and storytelling alongside a favourite themed book. Easy, DIY toys for the win! 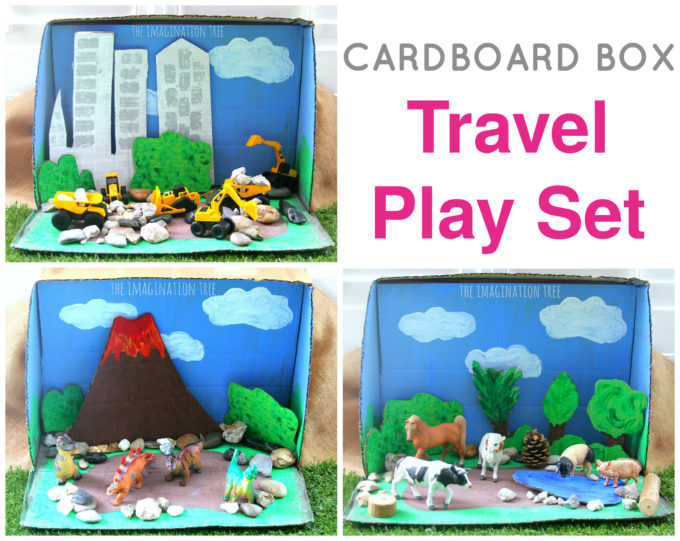 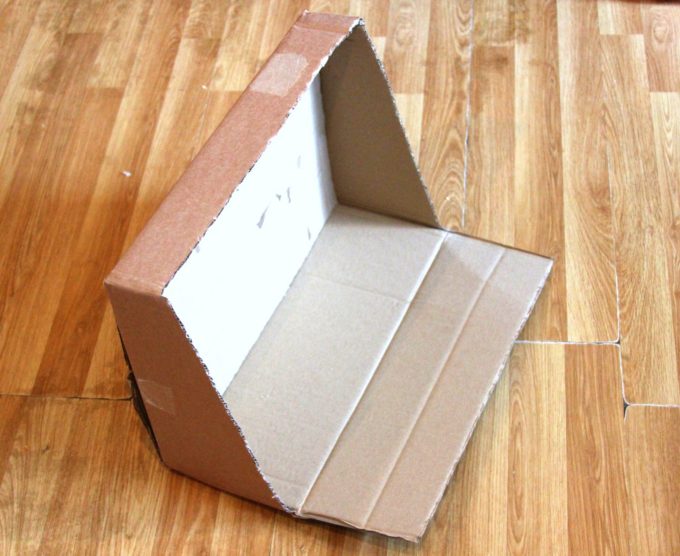 This DIY is so easy and yet looks really effective. This could make a really sweet homemade gift for a preschooler in your life too!

Simply turn the cardboard box on its side and cut off one of the central opening flaps to make the shape shown above. The second opening flap will be lying on the floor and creates the base of the small world play box.

The side walls of the box are sloped backwards for easy access and play. Save the spare cardboard that you’ve cut off as this will form the interior “props”.

Next, paint the inside of the box with a sky and clouds in the background and green grass with mud on the base foreground. These are fairly generic to suit the different play-scapes that we will put in the box. 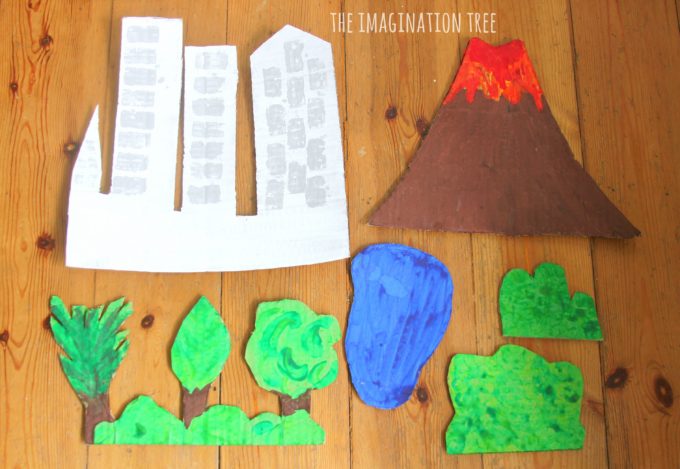 With the spare pieces of cardboard cut out a cityscape, a volcano, a pond, few bushes and a  line of trees joined together at the base. Paint them and let them dry. I printed windows onto the sky scrapers using a small rectangle of cardboard dipped into slightly darker grey paint.

These structures are supported by rocks and stay up pretty well during play. 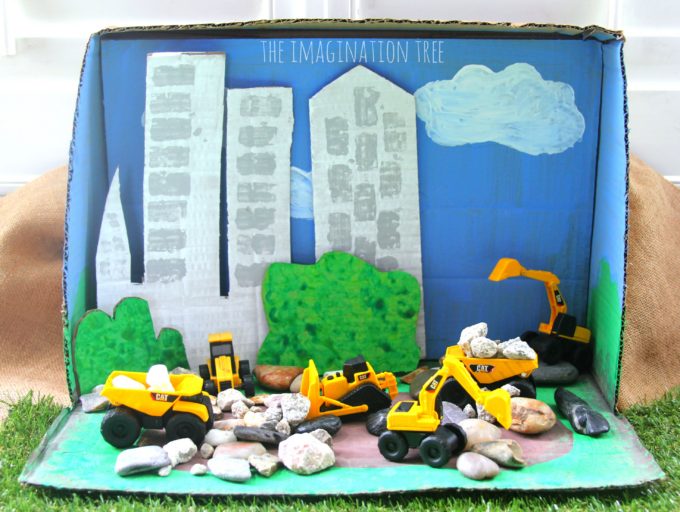 Scene 1. The first small world scene we created using the box was a construction site. For this one we used the skyscraper and two bushes. In the foreground we piled up lots of pebbles and rocks then filled the scene with the mini diggers which are our absolute favourite for SO many play activities! 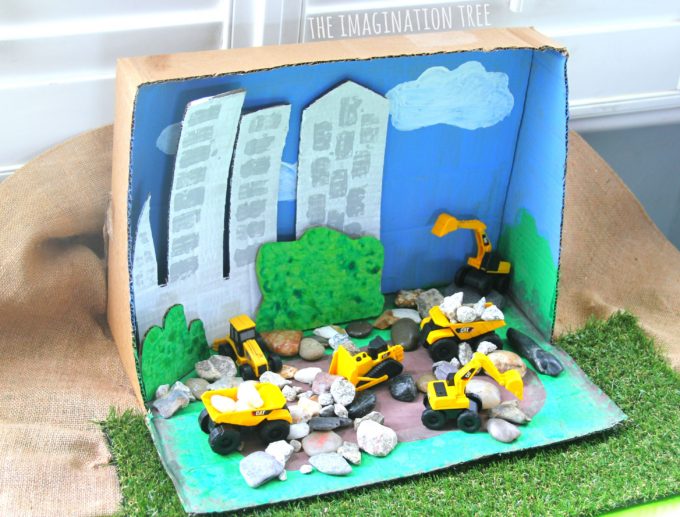 As you can imagine, this was Mr 2’s absolute favourite play box and he was so thrilled to be digging and piling up the rocks with his favourite trucks. You can see the giant digging pit I just made him here, plus all the other billions of construction vehicle play ideas we’ve got too. 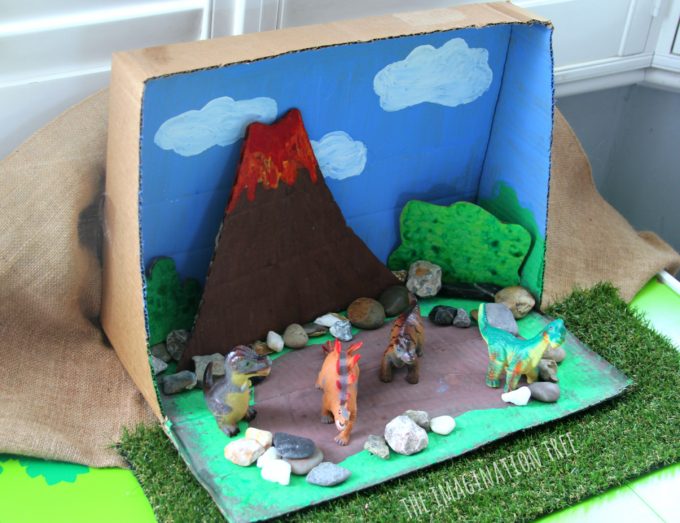 Dinosaurs are a new interest with my littlest but the older girls have loved them for a long time, so all the kids played equally with the dinosaur land scene! For this set up we used the volcano and bushes, with just a few rocks in the foreground alongside our soft, chunky dinosaur set. 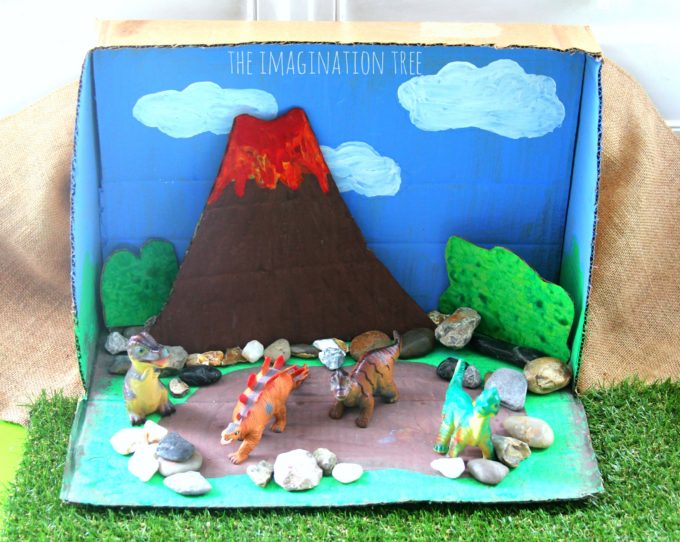 This would be a perfect set up to turn into a story-box, reading dinosaur story books alongside the imaginative play and storytelling scene! You can find all our other DINOSAUR PLAY ideas here too. 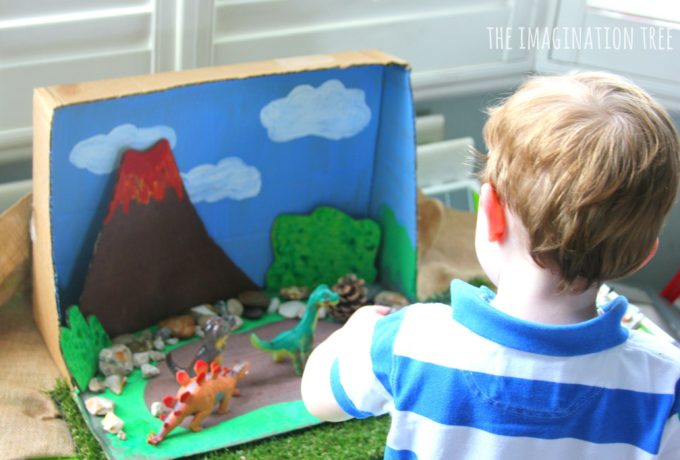 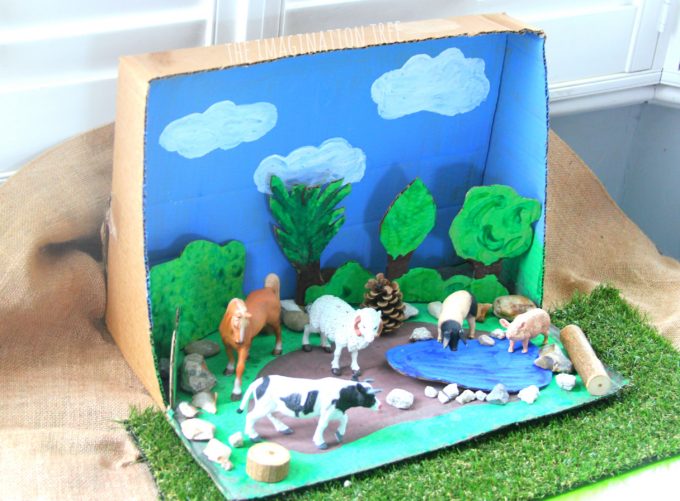 Our third set up was a simple farmyard. This one used the bushes and also the line of trees. We added some natural wood blocks, rocks and pine cones to the foreground, along with the pond and lots of farm animal toys. This was a lovely scene and could also incorporate the singing of Old MacDonald Had a Farm and other favourite songs during play! 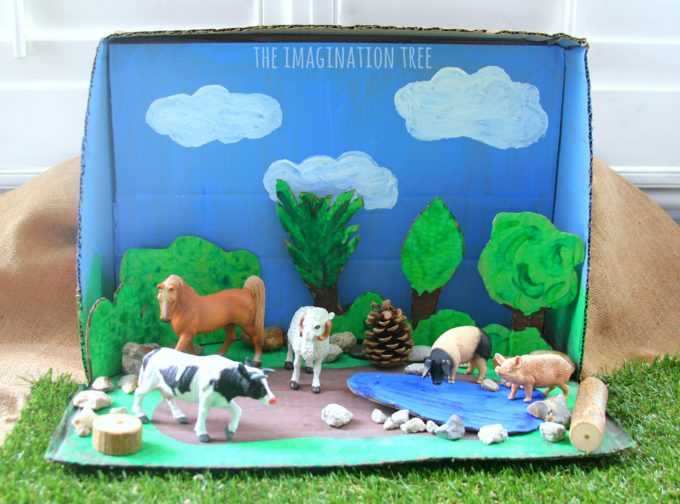 There are SO many ways this easy cardboard box small world play could be adapted and extended further. How about making a fairy garden, a home for the Kindness elves, Shopkins, dolls house, mini-beasts and various other animals habitats? Take a look at our My Little Pony Small World box for some rainbow and cloud inspiration. (It’s pretty darn gorgeous!) 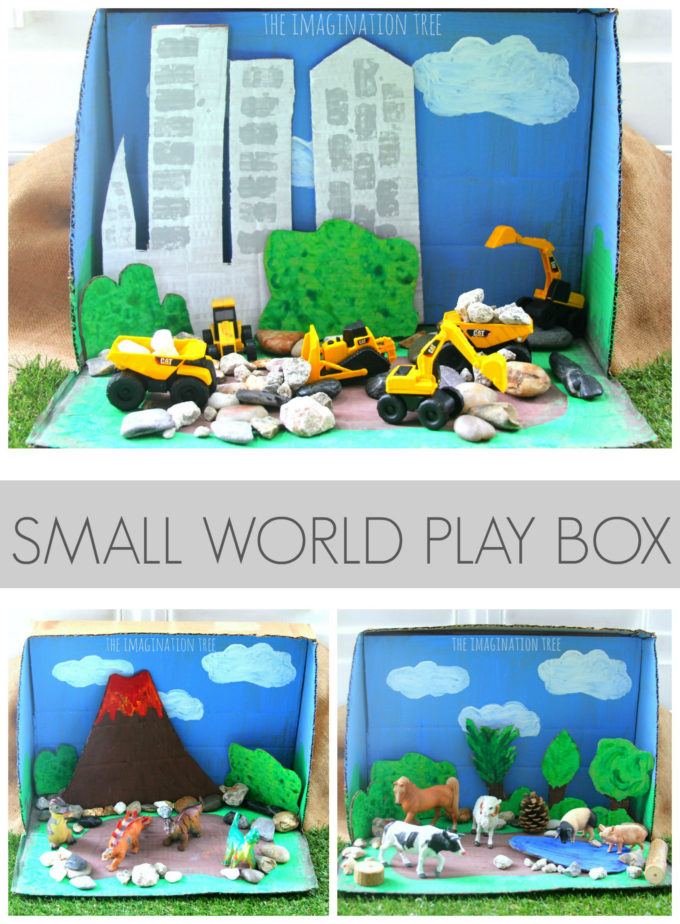 We are HUGE fans of small world play as you can see in our archives.

DIY resources and Homemade toys are also a favourite and we have plenty to browse and be inspired by too.

[This post contains some Amazon affiliate links to help you find the things we love and recommend! Thanks.]