Make an alphabet sound machine for a fun letter learning early literacy game for kids! This hands on game promotes kinaesthetic learning through play and is suitable for toddlers to school age kids, with some extension activities. 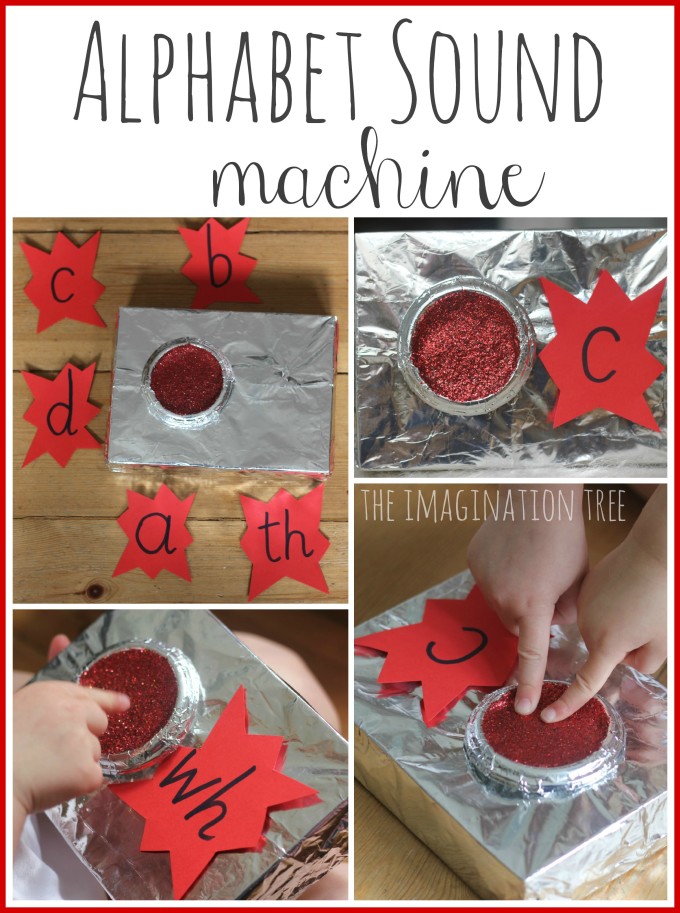 When I was teaching Reception (Kindergarten) classes, early literacy was one of my favourite areas of learning to plan activities for, especially linking letters to their corresponding  sounds. There is absolutely no need to ever use a worksheet with young children (I would say all age children but we can leave that debate for now!) as ALL learning happens best when it is done through a hands-on, physical activity, as this is the most effective way the brain learns and retains new information. Much in the same way as you just can’t learn a musical instrument by reading about it or hearing it played, you just have to have a go yourself to being to learn!

Understanding phonics means kids need to say and sound out letters in as many active and fun ways as possible, moving their bodies or manipulating objects and I will be bringing a whole series of these to the blog over the coming months. See also our current, ongoing Playful Literacy series here.

I love the idea of making machines that can do weird and wonderful things as kids are always excited by these and you can change them to suit any activity or learning intention. We made a very popular number addition machine with pom poms that was a brilliant way for the girls to visually understand the combining of two groups of objects.

For this activity I made a very simple alphabet sounds machine by covering a small cardboard box with tin foil. We found a yogurt pot lid and I wrapped that with the same foil, then we squeezed in lots of PVA white glue, sprinkled on tons of red glitters and left it to dry overnight. The next day we stuck it onto the front of the box to become a big button, leaving a little space next to it for letter sound cards. 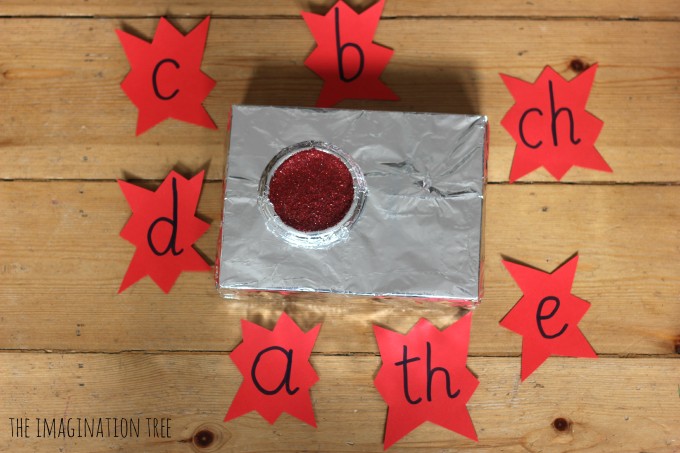 Then I wrote out some letters of the alphabet on to card and cut them with a starburst edge. I also wrote some digraphs (these are where two sounds blend together to create a new, distinct sound e.g. th, wh, sh) as a challenge for Cakie who already knows all the phoneme-graphme correspondences. 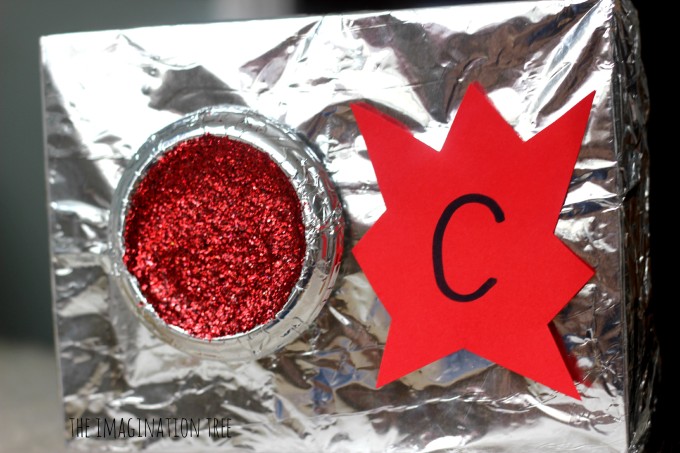 I told the girls that we had made a wonderful sound machine! But oh no, it is broken! When we push the big button at the front we should be able to hear a sound, but now we need to make the sound with our voices instead. We took turns attaching different letter cards to the front with blu-tac, and pushing the button to say its corresponding sound out loud.

Occasionally there were squabbles and they both had to push it at the same time, shouting their version of the sound over each other!

We played this game with all the different sounds, working on the more unusual ones that they needed more practise with the most. Pop surprised me with how many she could do independently.

I suggested holding the button down for a long time to make the sound stick. “Sssssssssssss” until their finger came off the button again! Then we pushed it lots of short, staccato times over and over again, “S’ “s’ S’ “s “s etc.

I have taught my girls the letter sounds before the letter names, so for all of the cards they knew them and said them predominantly by name. I took the time on this occasion to emphasise the real letter name first and then encourage them to make the letter name say its sound. “This is letter F (eff). It says fffffffff” (like a deflating inflatable toy sound!)

It’s crucial for children to be able to say both the letter name and its corresponding sound (phoneme-grapheme correspondences) so that when faced with trying to decode  unfamiliar words in books they can break them down and work them out phonetically. It’s also hugely important to teach them small, familiar words by sight, which is another area we will be covering on the blog more often as C begins to learn more by heart. 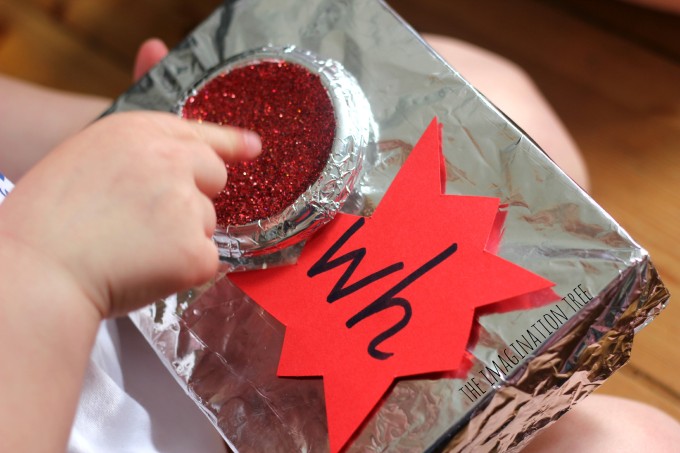 For Cakie I introduced the digraphs and she said what each individual sound said, then I told her what those sounded like when blended together. She used the machine to say these out loud and we talked about going to find these in words in books as a next step activity.

literacy: phoneme-grapheme correspondences, recognising letters by sight, understanding digraphs, understanding that letters have a name but also a sound 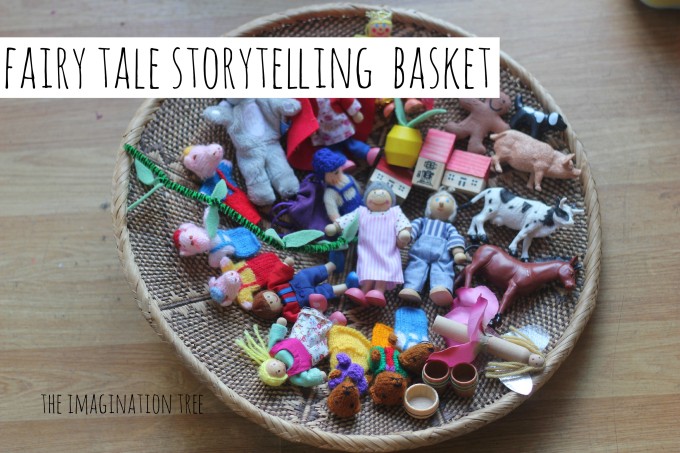