Create a magical birthday party based on the wonderfully whacky story of Charlie and the Chocolate Factory, by Roald Dahl, filled with colour, sweeties and crazy invention games! 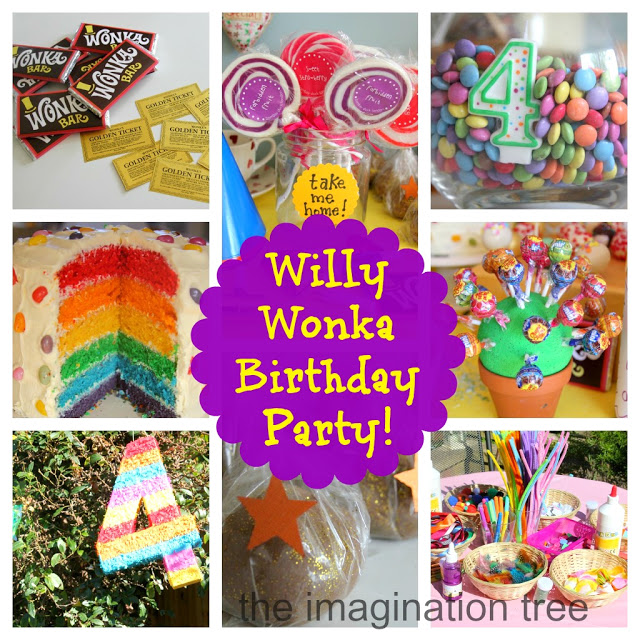 Approximately 5 minutes after Cakie’s 3rd birthday Fairy party last year, she declared that she wanted her 4th birthday party to be “all about Charlie and the Factory!” She absolutely adores the 1970s version of the movie and was very excited about the idea of a garden filled with sweeties and chocolates, and it did seem like a great idea for a party! So here is what we did…. 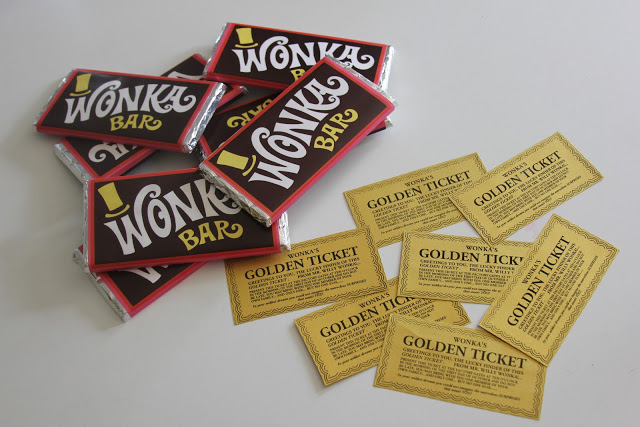 On the wonderful eBay, I found pre-made Wonka bars, complete with Golden Tickets tucked inside! These formed the invitations and on the back of the ticket I wrote the details. I admit that I was pretty excited about these myself (who didn’t want to get one of these as a child?!) 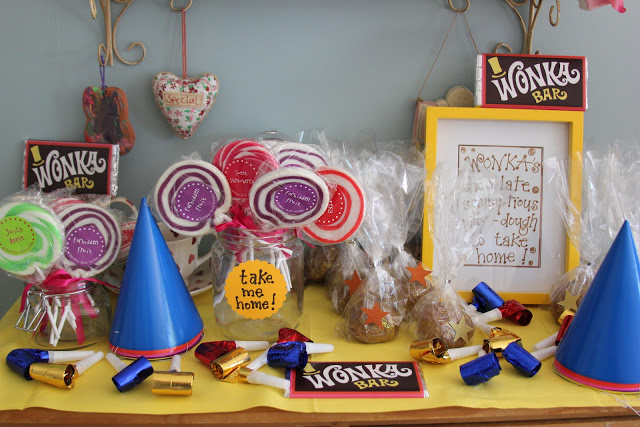 The food was laid out on a table with green coconut “grass” to represent the chocolate garden. In the middle was a chocolate fountain to represent the river and waterfall with fruit and marshmallows to dip into it (no Augustus Gloop to push into it, though I did contemplate it!) 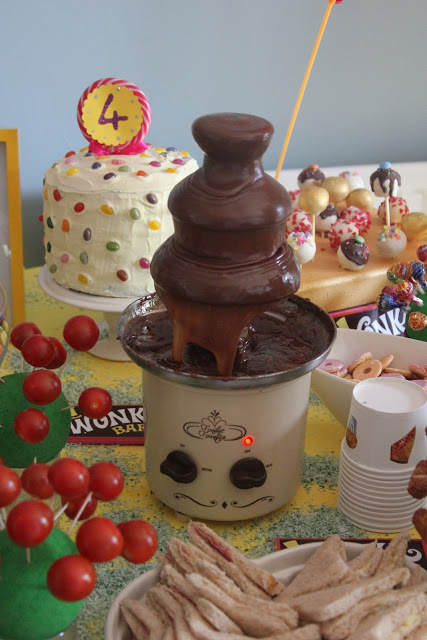 I used spheres of florists oasis to become little trees in pots, growing various foods to pick off and eat! There were tomatoes, savoury snacks and lollipops, as well as other things in bowls. 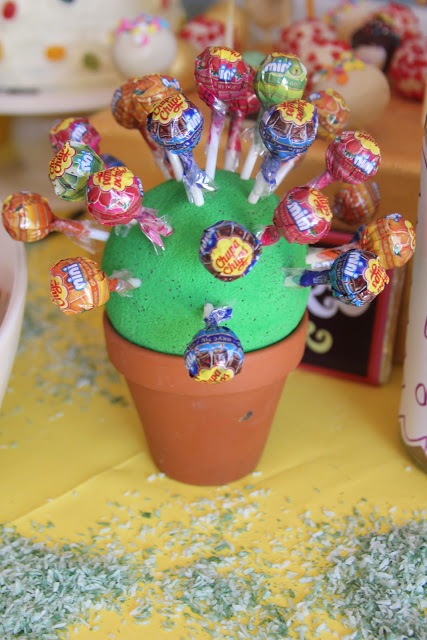 Little signs with quotes from the film and lemonade in lovely bottles re-labelled as “Fizzy Lifting Drink” to make you fly after you drink it! 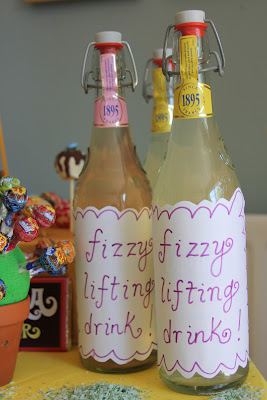 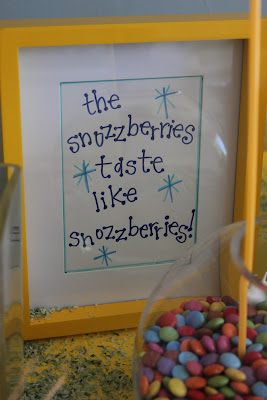 The cake was a 6 layer rainbow cake covered with jelly beans, which seemed crazy enough to be very Willy Wonka indeed! I’ve seen this cake around for a couple of years now and have always wanted to make it. It was surprisingly manageable (following my corner-cutting, lazy method!) Read this separate, step-by-step how to post here for how to make a rainbow cake.  I told her there was a surprise wanting inside her cake and, thankfully, she loved it! 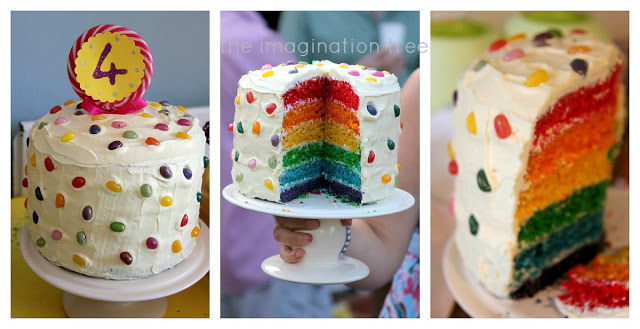 It was such glorious weather that the whole party took place in the garden, and we nearly didn’t need any party games in the end because they were happy in the paddling pool and with all the activities that were set up! There were giant cardboard circles stuck on bamboo canes and ordinary balloons on sticks placed all around the garden, to represent lollipops. 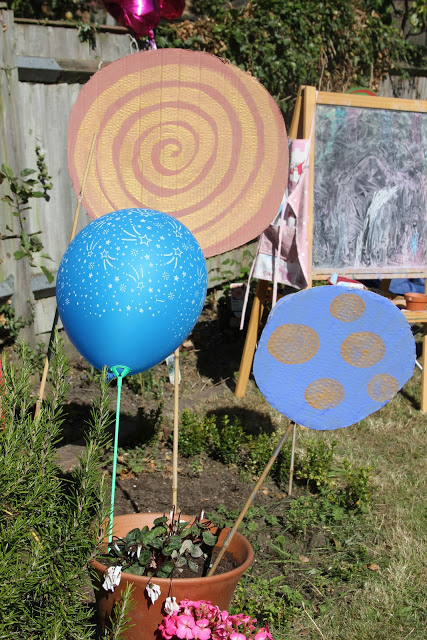 There was an Invention Room where the kids could design and decorate their own sweets and cupcakes using a fabulous range of craft supplies from Yellow Moon (one of my favourite go-to places for all things creative and fun!)
We had pipe cleaners, coloured buttons, cupcake foam stickers, beautiful ribbons, speckled feathers, pom poms, glitters, glitter glue and PVA glue, as well as sweet shapes cut from card and cup-cake templates to decorate. There was a competition to design the most fantastic sweet (worthy of Slugworth’s envious eye!) and the winners chose prizes from the prize tub. 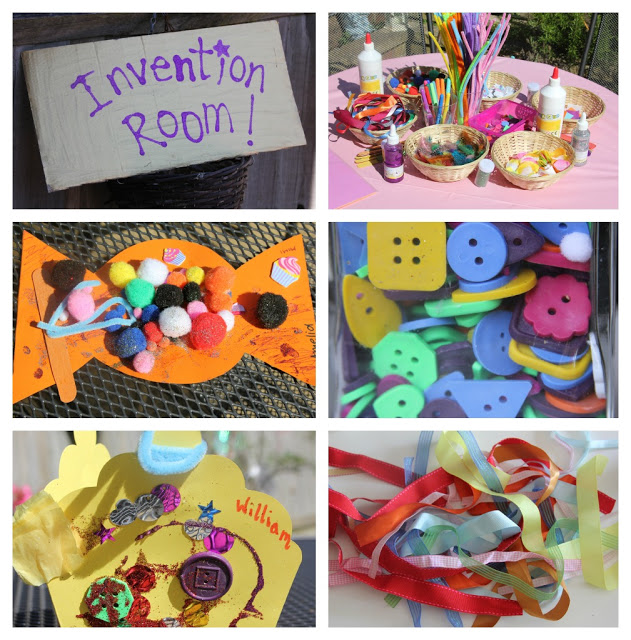 Around the lawn there were little play stations to keep them busy and engaged. There were some purple water beads and neon cups for scooping and pouring, a large tub of coloured rice and tape-wrapped cardboard tubes for turning into sweetie machines, churning out coloured sweets through the pipes! This was a really popular area, with the girls’ cousin ending up sitting in it to play for quite a while.

On a table there was some Wonka play dough with coloured buttons, candles, cup-cake cases and empty chocolate trays, for creating some fantastical and delicious sweets and chocolates to play with! You can also read this post about making weird and wonderful Wonka dough and ideas of what to add into it. 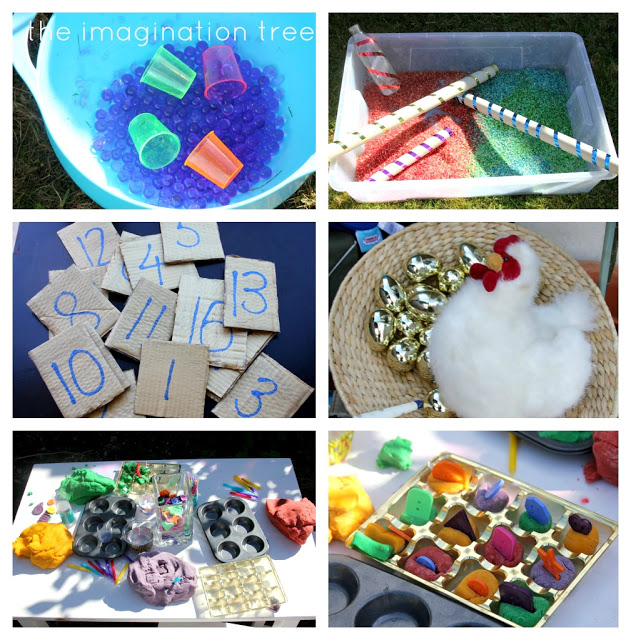 Games:
We ended up playing very few of the planned games in the end because there was no need, but we did play a couple.

Golden Ticket Treasure Hunt was a hit and everyone got a prize! I painted a large piece of cardboard with gold paint and cut it into tickets, adding numbers with glitter glue. These were hidden around the garden and each child given a number to go and hunt for. Once their ticket had been found, they traded it for a wrapped book in the prize bucket (The Book People sells sets of 10 popular children’s books for £9.99, so less than £1 each!)

The Golden Egg Race was simply an egg and spoon race, split into 4 runners at a time, using plastic gold eggs. My trusty chicken sat in her basket nest and watched to see if her eggs would be “good or bad” (I know, it’s a goose really but I didn’t have one of those!) Lots of simple fun!

Piñata: At the very end of the afternoon there was a number 4 piñata, filled with felt tip pens and plastic gold coins to collect after it was broken open, scooping the treasures into individual paper bags. 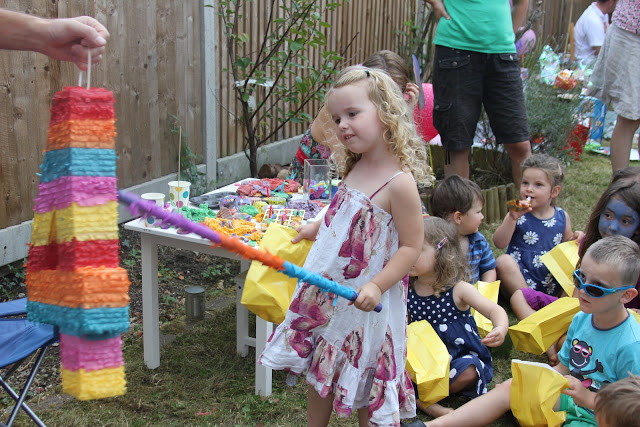 For take home gifts there were bags of Wonka’s Scrumptious Chocolate Play Dough and giant lollipops, as well as party hats and blowers. See how to make easy no-cook chocolate play dough here. 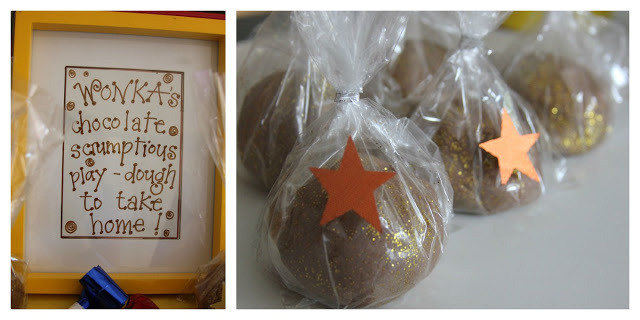 I had lots more games planned, including throwing bean bag “bubble gum” into Violet Bauregard’s mouth (a hole in a cardboard box!) and jumping across the chocolate river (an old golden curtain) but we can save those for another time! The birthday girl had a wonderful day and we were very lucky to have such lovely friends come and share it with her. Thank you all! 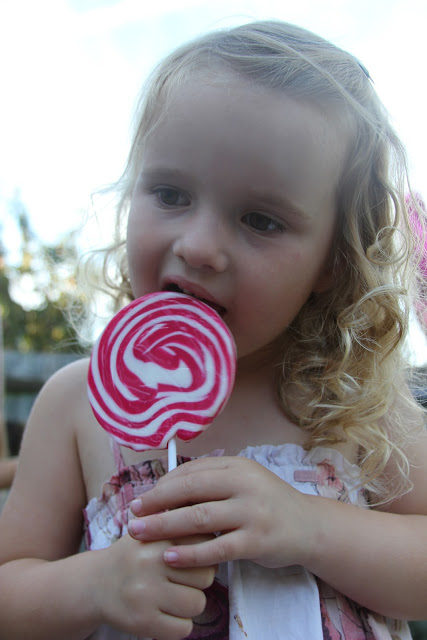 Like birthday party ideas? You may enjoy these ones too:

Please share YOUR party ideas too! I LOVE parties!
Thank you to Yellow Moon for supplying the craft supplies for this party!