Sew a little stuffed snowman using felt and buttons with twigs for arms to hang on the tree or sit on the mantlepiece this Christmas! A cute collaborative craft to do with kids during the holiday season as a decoration or a homemade gift. You can’t help but smile when you look at that little face! 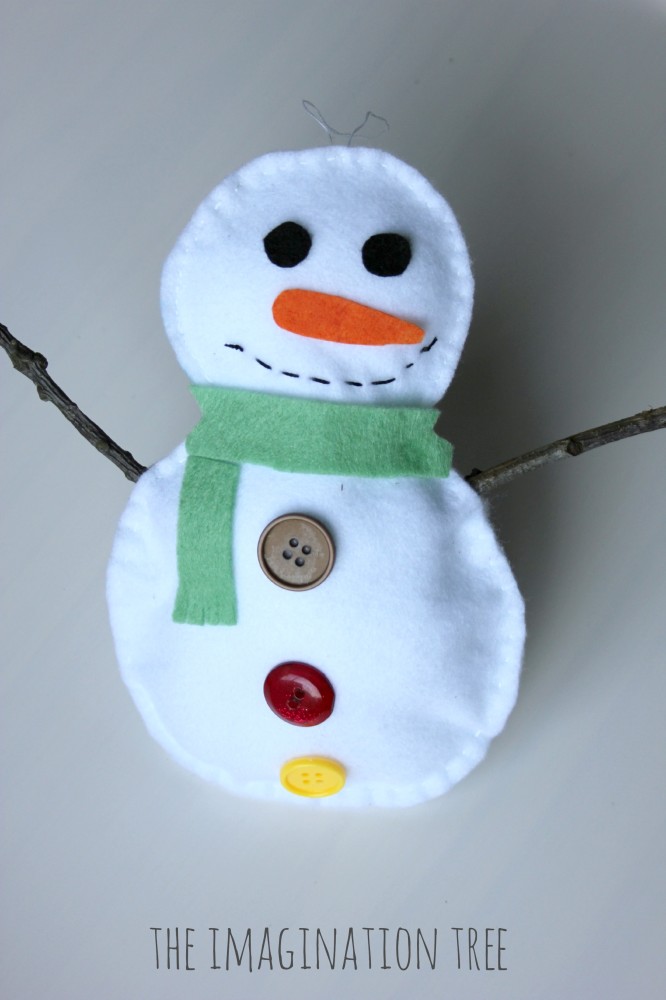 This snowman sewing craft can be done independently by older children, or as part of an adult-child collaborative project if the sewing is a little difficult for them. {We actually made these together two Christmases ago so my eldest was just 3, and not quite able to sew yet. Now she could have a try at more parts of this independently.)

black, orange and other colours of scrap felt 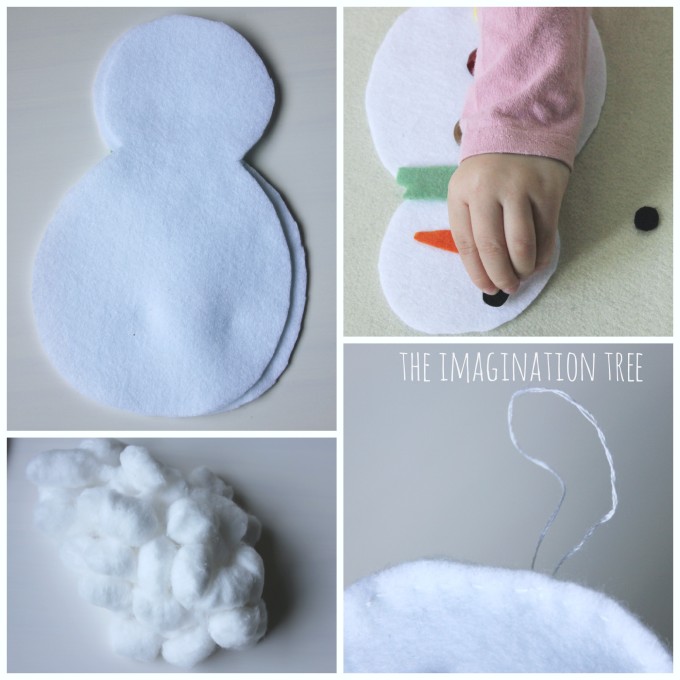 Cut the snowman shape into the two pieces of white felt and set one aside to use later. Onto the first one, glue on eyes, a carrot nose. a scarf (cut from a scrap of material or even a real piece of an old woollen jumper). Glue on some buttons on his tummy.

If you want to sew his mouth with black thread, this is the time to do it before joining him together. Other options are to draw it on with a black Sharpie marker or stick another piece of cut felt. 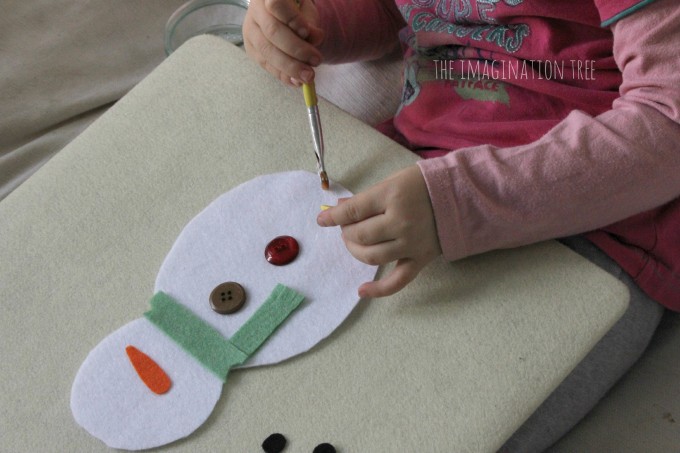 Then place the back piece of felt behind and sew a running stitch around the outside edge to join them together. Leave an opening 1-2 inches wide for putting in the stuffing. Stuff the cotton balls inside until it is nice and plump enough for cuddling, then sew up the gap. 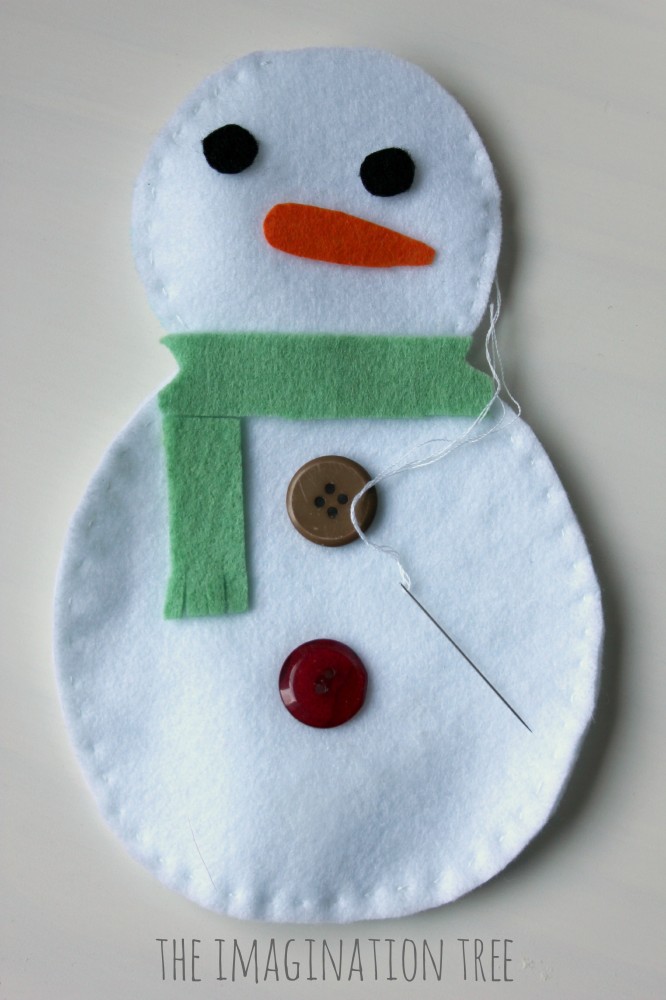 Break the twigs to equal lengths and squeeze one in between stitches on either side of his body, then add some sting glue to keep it in place. 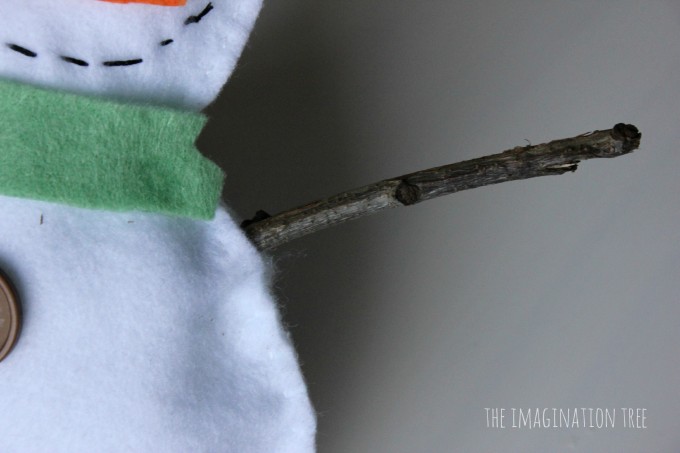 Sew some thread or wool/ yarn in a loop on top of his head if you wish to hang him up, or else stand him on the side board to smile at everyone! If you add some dry beans into the stuffing and shake them down to the bottom of his body, he will be heavy enough to stand on his own.

You could add a hat or any other details too! Maybe stitch your child’s initials and the year onto the back to make it into a keepsake. 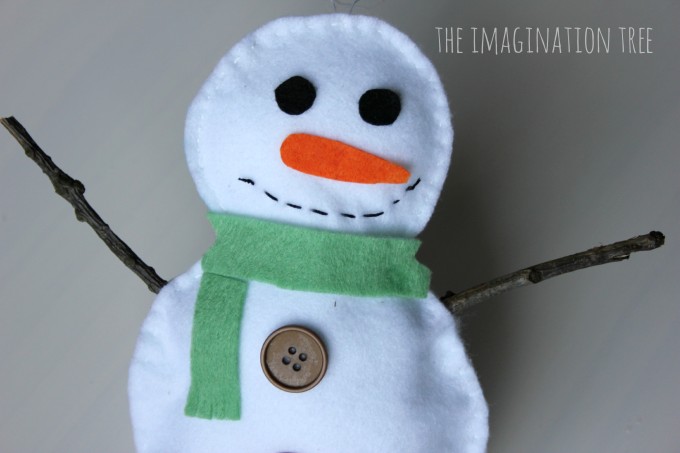 See all our other Christmas play and craft ideas here

[At the time of making this, Cakie was 3 years and 3 months]