We made a new small world play scene together to cater for C’s new interest in dinosaurs. We have one of the “Harry and the Dinosaurs” stories and she likes it, but in all honesty it was the television version that got her hooked! Ah well, a bit of TV is fine right? 🙂 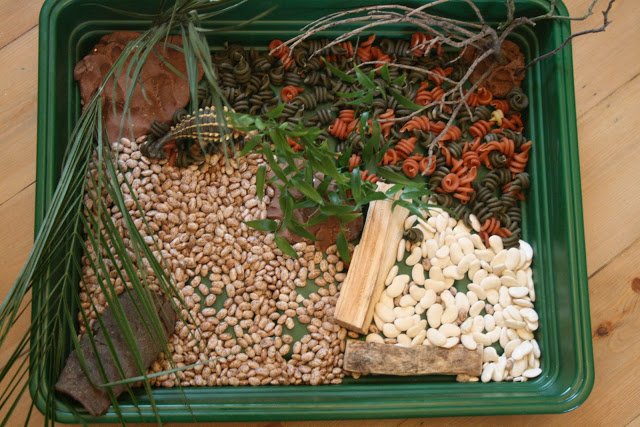 She also plays a great dinosaur game with daddy when he gets home from work, which involves quite a lot of roaring and chasing (just perfect before bedtime!) So her uncle gave her a few toy dinosaurs that he had and we set about making a small world playscape for them to roar in. 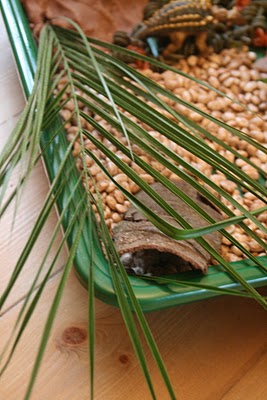 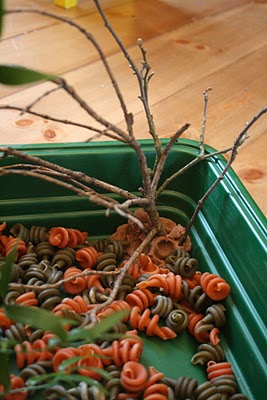 We poured some dried beans into the bottom of a garden tray to form a multi-sensory base (about 30cm by 15 cm- a cat litter tray would be a good alternative!) This time we used pinto beans and butter beans because they look like brown and white pebbles, respectively. The red and green pasta shapes were left over from the construction small world play and added another nice sensory element. 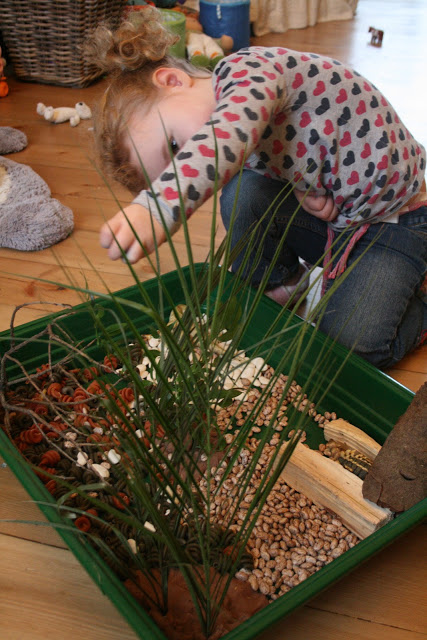 She collected an armful of twigs, leaves and other oddities during a trip to the park in the freezing, foggy mud and we brought them home to help create a jungly “other worldish” play scene. 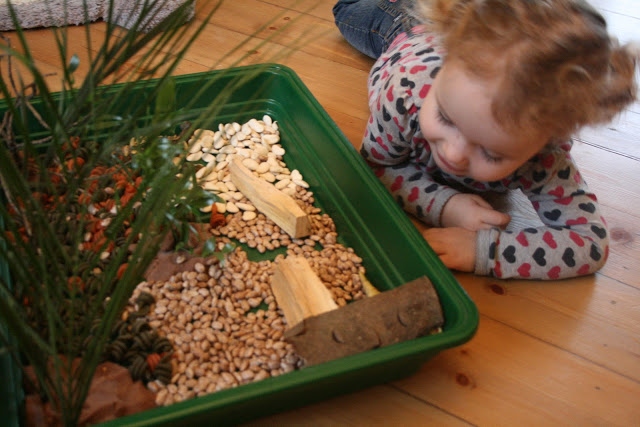 We secured the twigs, leaves and other foliage using small lumps of the chocolate playdough to resemble mud, and they stayed up nicely. 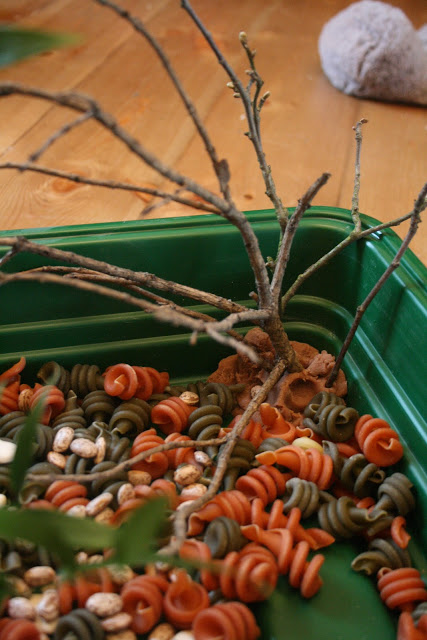 Then it was on to playing and she handled that part very independently! (Although I was required to come and roar with her and eat her dinosaurs all up.) 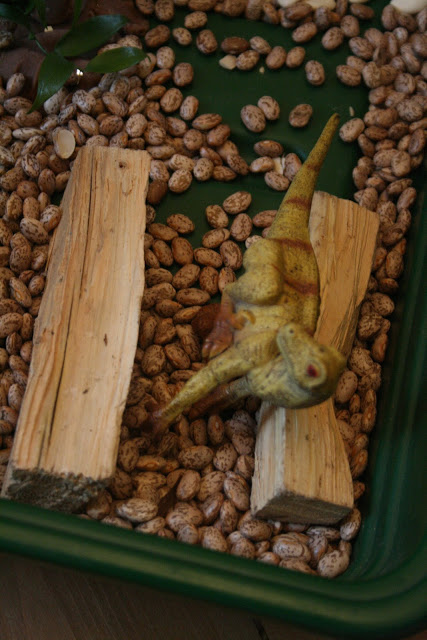 Making little houses for the dinosaurs from bark and wood blocks. 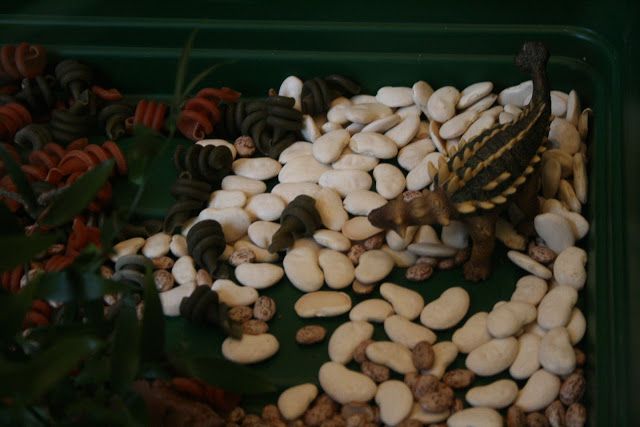 At some point a giraffe and zebra crept into the play scene! She said “it’s all jungly!” So the animals co-existed nicely and the game morphed into jungle and wild animal play. 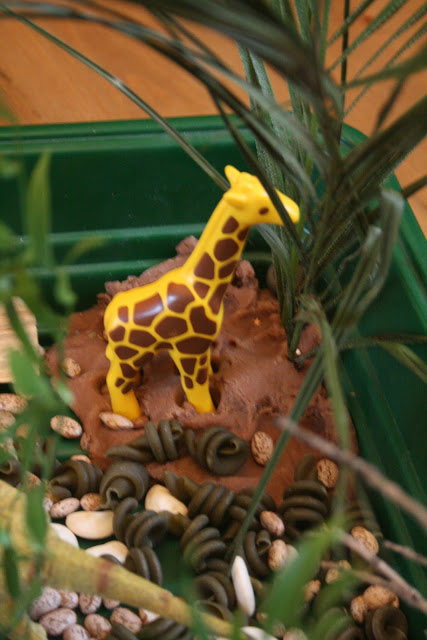 Zebra and dinosaur..the best of friends. 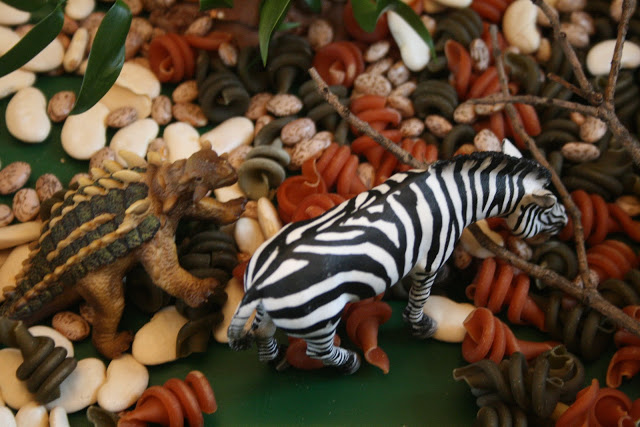 And we moved it up to a higher level when baby girl woke up from her sleep, for obvious reasons 😉 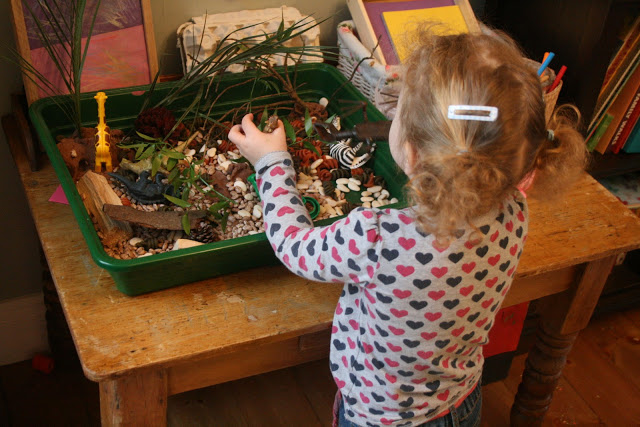 Easy, fun, no (real) mess and fabulous for igniting the imagination.