Make some interactive phonics ball games for preschoolers and young school learners with these easy DIY ideas! Perfect for those children who are beginning to learn their letter sounds and then use them to create small words. 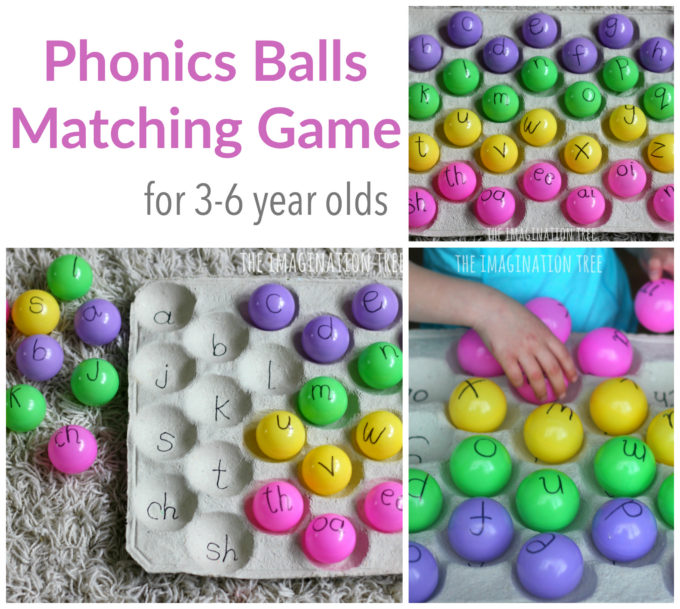 If you’ve been around here for a few years you’ll know that apart from making play dough recipes, my other favourite thing to do is to create things out of the recycling bin!

I love simple DIY toys and games (here are some homemade toys for babies and toddlers you could try!) and I am particularly keen on homemade learning resources. 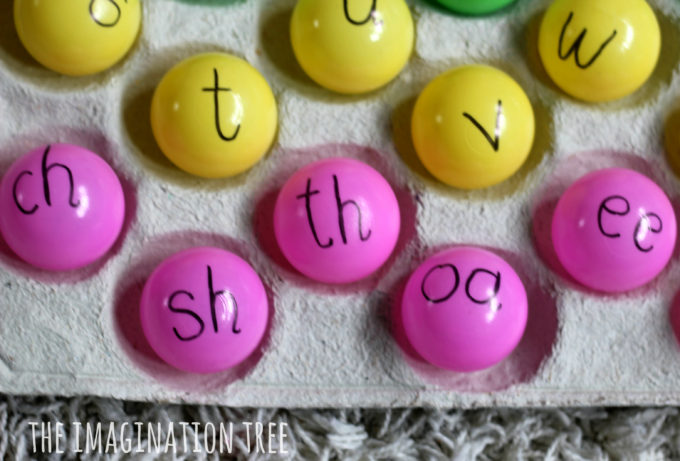 If your little one had a ball pit at some point in their baby or toddler hood then chances are you’ve got a big bag of these colourful balls somewhere in the garden shed! 🙂

They make an absolutely brilliant DIY learning resource so go and dig them out and let’s make some phonics learning games for home or school! If you’re a parent reading this and feel extra kind, you could make a set of these and donate them to your child’s Early Years teachers at school or nursery. They will love you for doing the work for them. 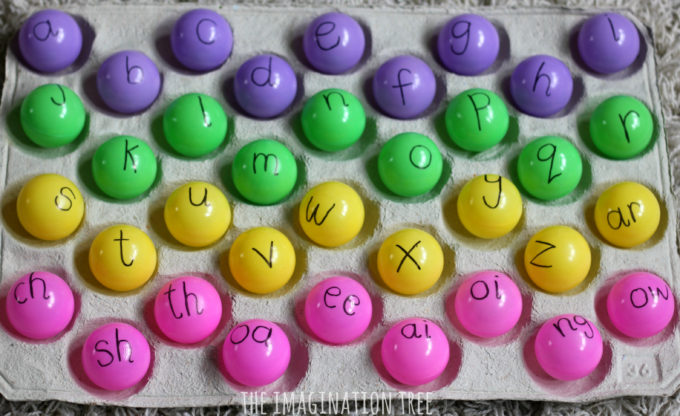 Ball pit balls. Ping pong balls work too as you can see from these DIY Ping Pong Alphabet Balls activities we did! But the size of the ball pit balls makes them a perfect fit for the packaging container.

Empty fruit box packaging. You can simply pick this up at the supermarket- they are very keen to donate it as it goes in the bin otherwise. 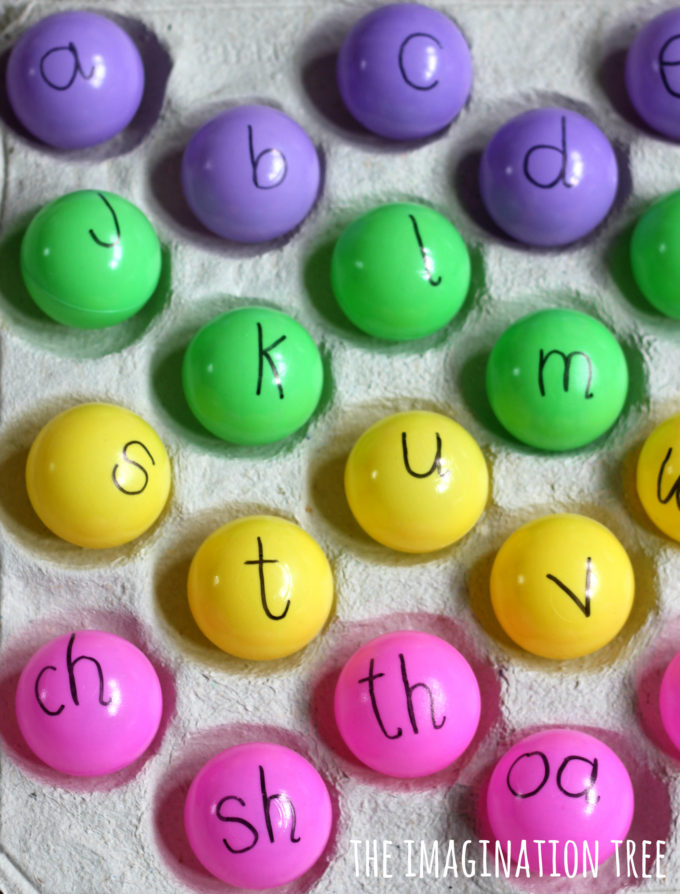 If your child is fairly confident with their initial letter sounds then you could also go onto the next stage and add in some trigraphs. Such as igh, ear, air, ure, tch.

Write the corresponding sounds onto the fruit box packaging and then jumble all of the balls up in a large bowl or tray. 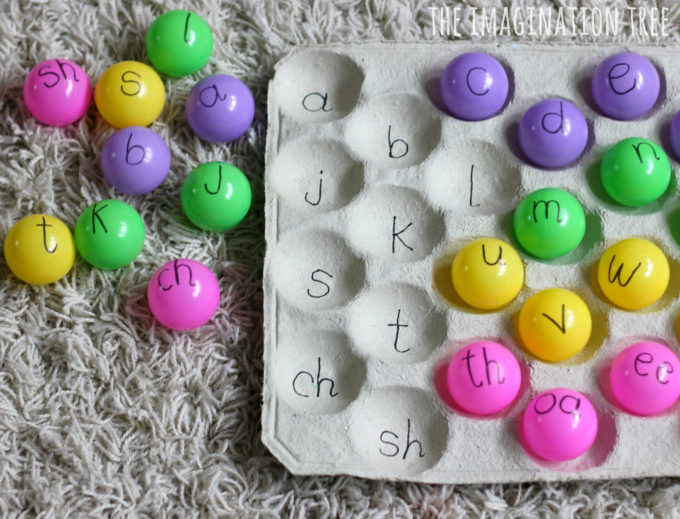 Simply call out the sound you want your child to find and get them to identify it, SAY IT and then match it!

This first stage may seem super simple but it’s critical as it helps consolidate recognition of the letter sound correspondences. If they find this enough of a challenge then leave the fame here and come back to practise it again the next day and so on until they can find, say and identify those sounds super quickly.

Equally, if your child is ONLY JUST starting out with phonics learning then limit this activity to just 3-6 sounds to begin with. Follow the programme your child’s school is using. It will most likely begin with letter sounds SATPIN. 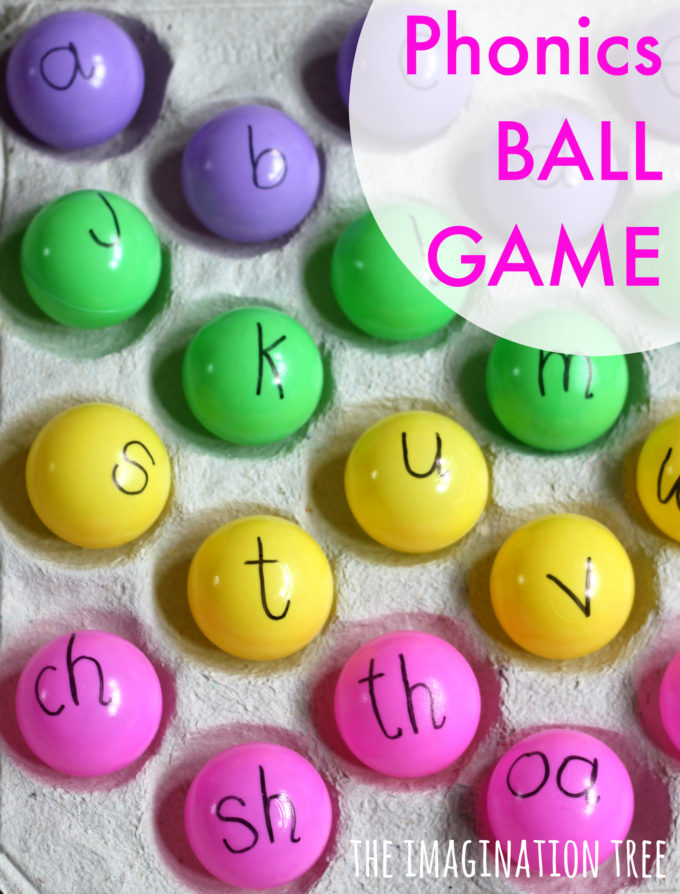 If you’re eagle eyed you’ll see that my daughter is at least two years younger in this picture. Yes, it really does sometimes take me that long (or longer!) to finally write up activities into blog posts! She’s 7 now and I think she was 5 here 🙂 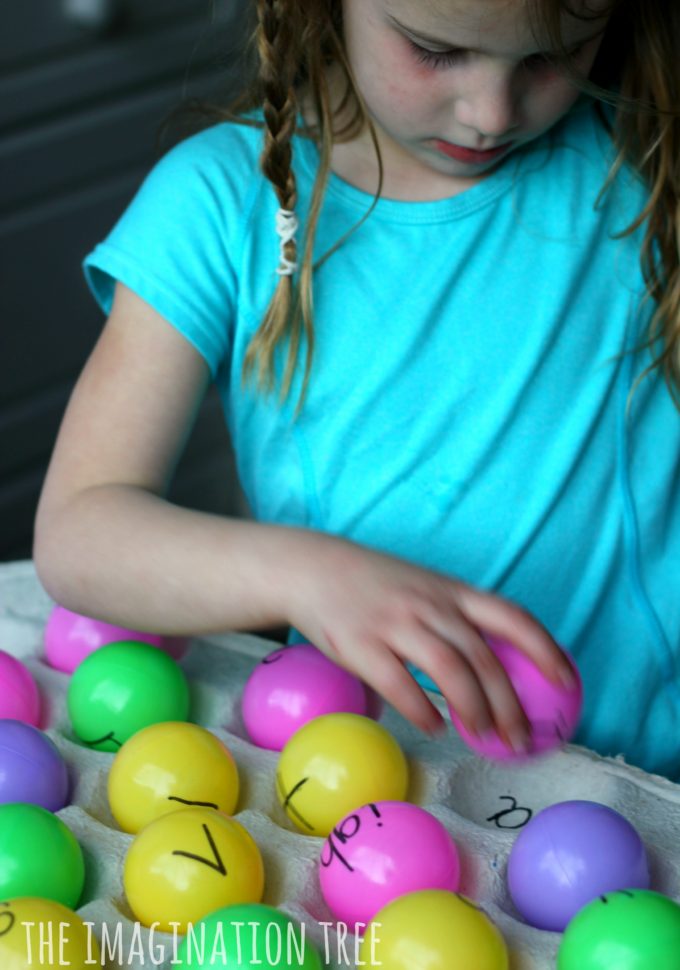 For those children now confident recognising and saying their initial letter sounds and beginning to be confident in digraphs and maybe even some trigraphs, let’s play WORD BUILDER GAME!

When your child or class is ready to start building words here is the next step. It’s lots of fun and there are some variations you can make too.

Find an egg carton to become a holder for the balls (or get another fruit box and cut it into strips with 3 spaces.) Alternatively, use three shallow dishes or egg cups. 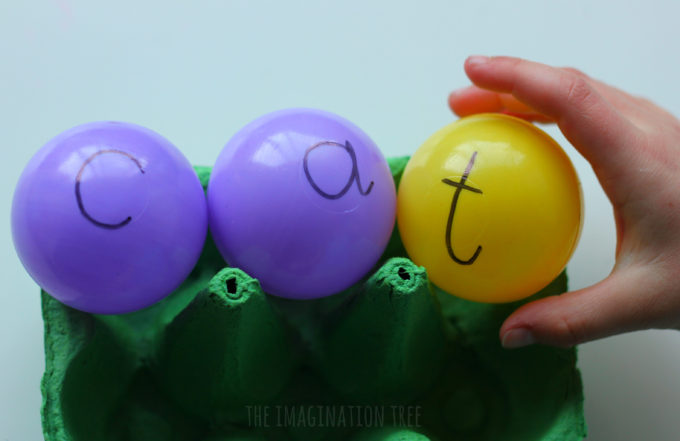 Cut some pieces of paper or card and write simple words using 3 sounds in each. A simple 3 sound word that is very easy for young children to decode, read and then write is called a CVC word. This stands for Consonant Vowel Consonant and you’ll notice they form the bulk of early reader books for good reason.

Here’s a simple list you could try making first, but they’re very easy to think of yourself too. 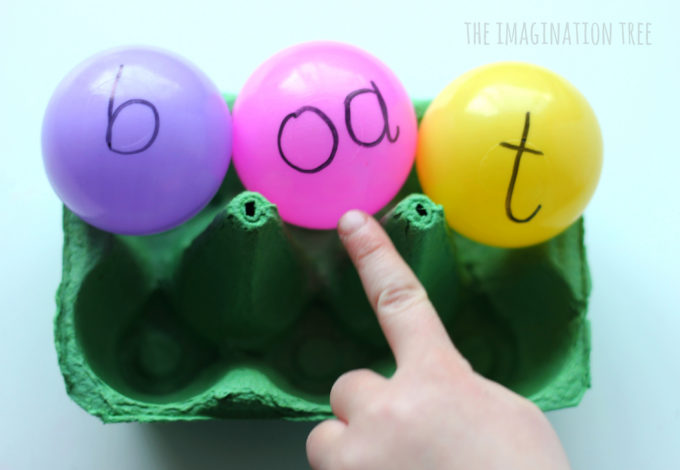 Set out the cards alongside the balls and the container, then ask them to choose one, read the word and then create the word using the corresponding balls.

When they’ve mastered simple CVC words, try adding some new words which include digraphs and trigraphs. 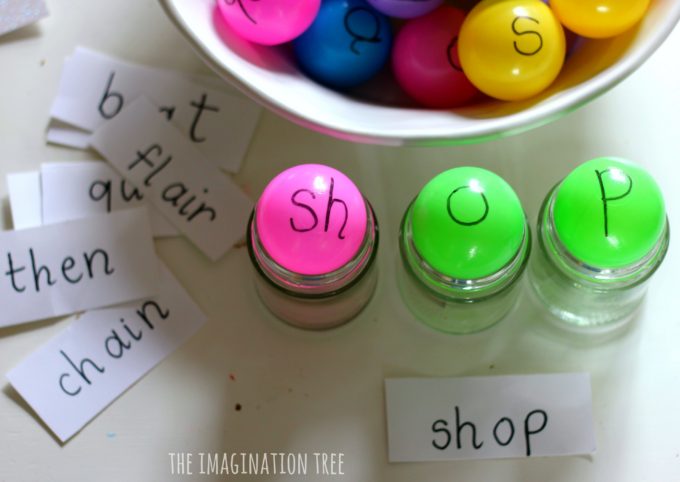 Make sure to ask them to look for the digraph/ trigraph sound on one ball, rather than to create it with separate sounds. Perhaps keep those combined sounds in a separate bowl to make them easier to pick out. 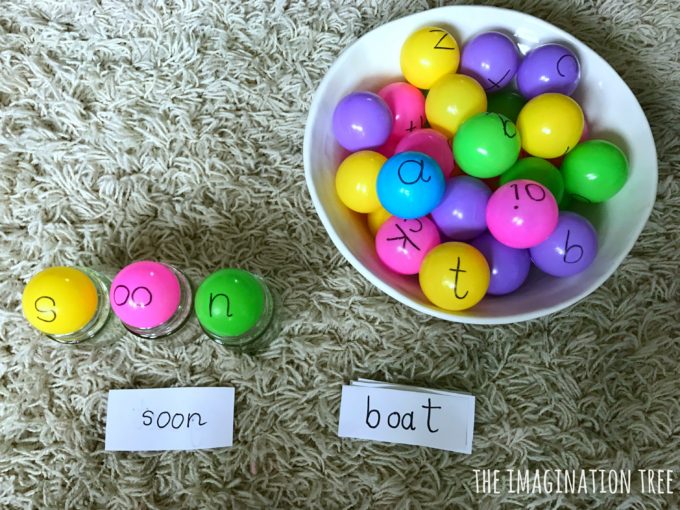 As with the simple CVC words, ask them to clearly sound out the word on the card first, then find each sound and create it in the right order in the stand. 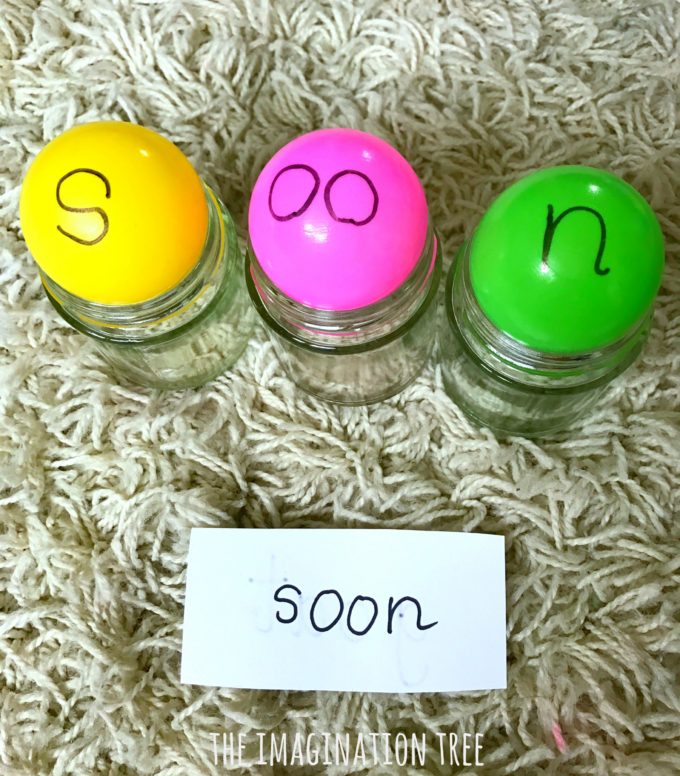 The next step is fun and one my kids thought of themselves. It simply involved them thinking of words themselves and testing each other with them, writing their own words on cards for the others to complete. Kids love creating games for each other and trying to make it as hard as possible!

If you want a real challenge, remove the cards altogether and simply call out words for them to hear, say back to you and create, 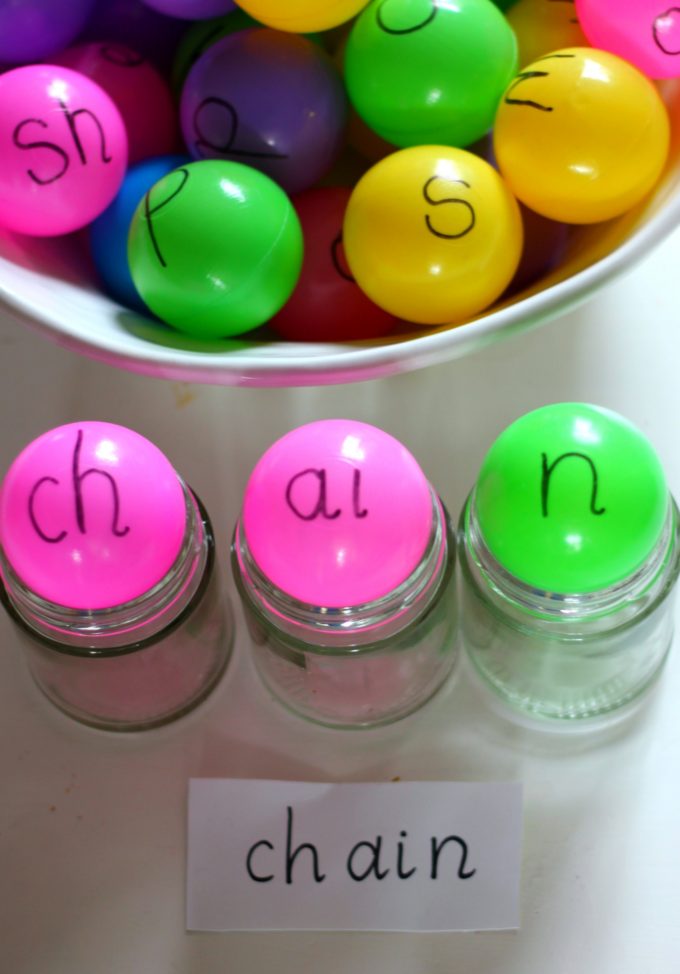 Once the games are over, store the balls in a box (alongside the fruit boxes if enough space) and pull it out another day to practice again and reinforce the learning.

You can use the same phonics balls in the water tray to play an alphabet fishing game (like this) or in any kind of sand/ messy play tray just for hiding, finding and saying the sounds they’re holding. Roll them across the classroom in phonics circle time and the one who catches it must say the sound they are holding. Pass a few around a circle in a drawstring bag and get each child to pull one out and say the sound they have. There are many ways to play with this one resource! 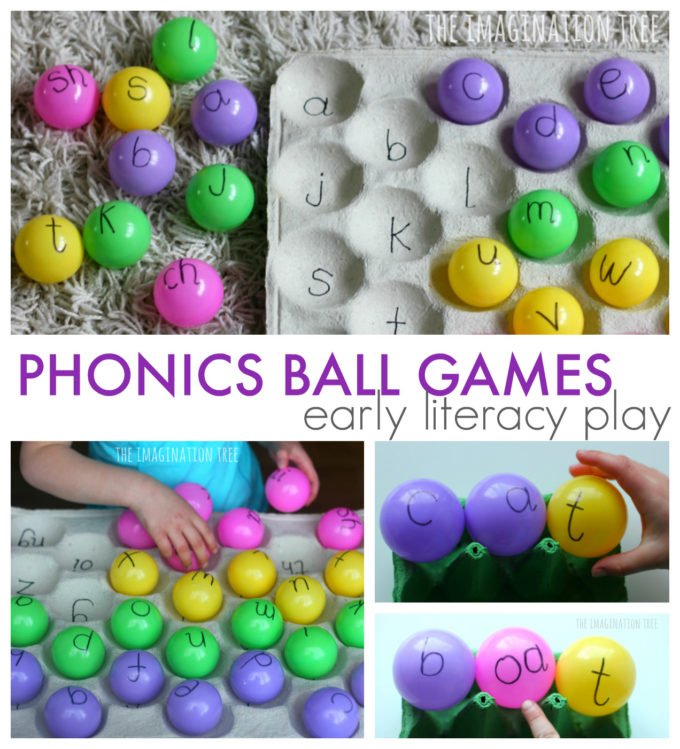 I hope you loved these phonics ball games and will share them with others!

You can find a HUGE selection of phonics, pre-writing, mark making, early writing, pre-reading, storytelling and early reading activities ALL in my PLAYFUL LITERACY archives here on the blog. Pin your favourites for future use!