With just 2 weeks to go until the Olympics are held in our home town, we have been having some Olympic playtime fun with a small world play sports scene! 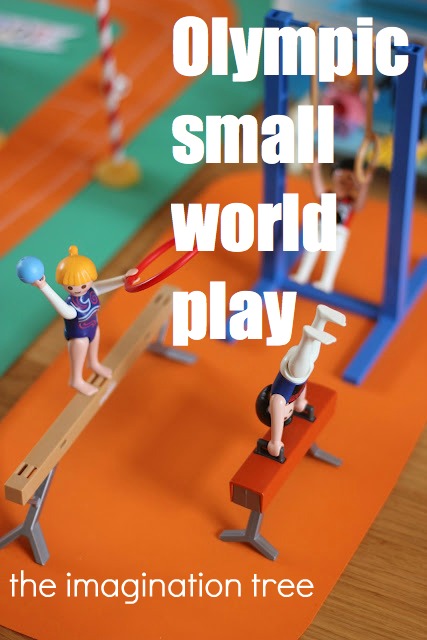 I am a HUGE fan of Playmobil and truly think it’s one of the best designed toys for children, young and old. I love the attention to detail and some of their imaginative play sets are nothing short of awesome! (This is not a sponsored post- just my opinion!) So when I spotted these Olympic sports figures for just a couple of pounds each in a local toy store I just had to add them to our growing collection. 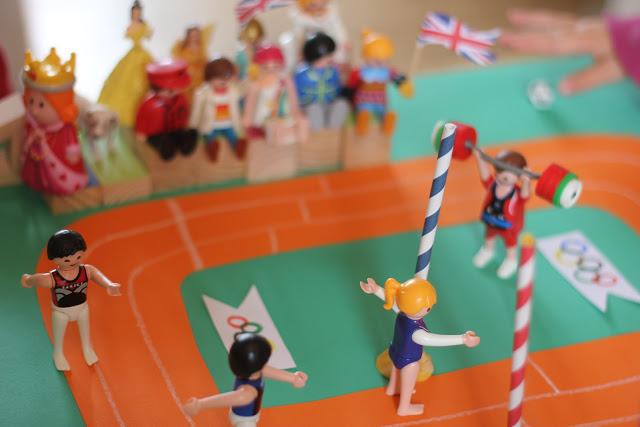 I found some A3 green card and layer that as the grass base. On top of that I cut out and stuck down an oval shape for the race track and used the leftover piece to create the gymnasium. I drew some lanes with white crayon, added a couple of Olympic flags, and used some coloured straws as finish line markers, stuck in play dough. 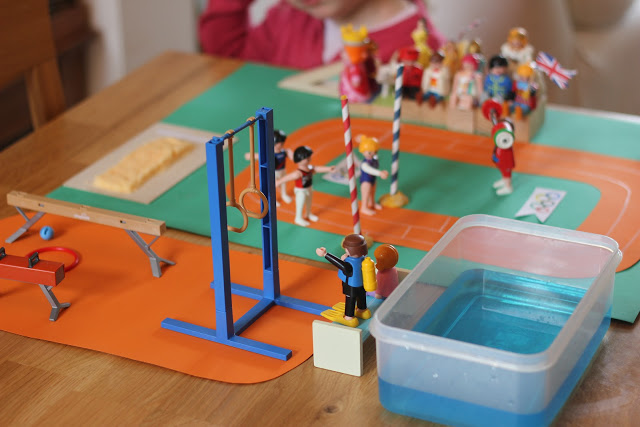 I set most of it up as an Invitation to Play for the girls to discover, and it was fantastic to see their faces! 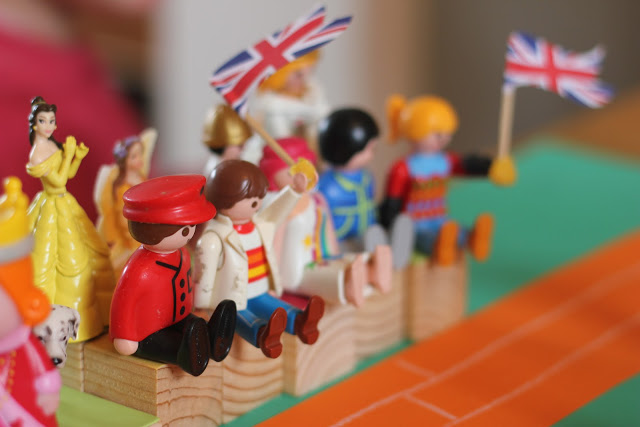 Cakie added the seating area all by herself, using wooden blocks and various people she could find. I love that Belle has snuck in at the back and even appears to be clapping!There’s also a dalmatian puppy, a fairy, a train driver and a couple of Queens, for good measure. Together we attached the Union Jack cake topper flags to their hands, using more play dough to stick them. What a patriotic crowd! 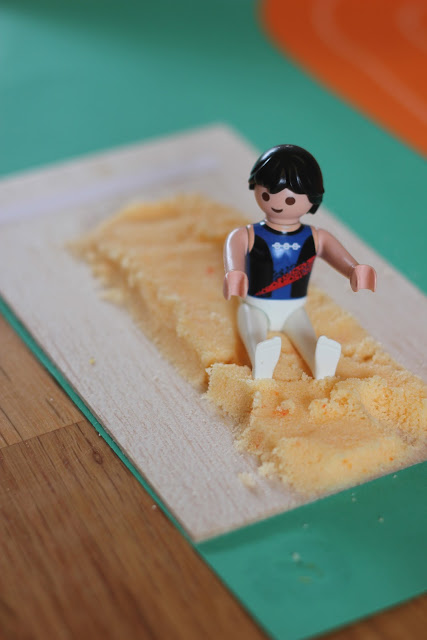 The long jump was made using coloured salt placed on a little piece of balsa wood. Read more about colouring and playing with sensory salt here. 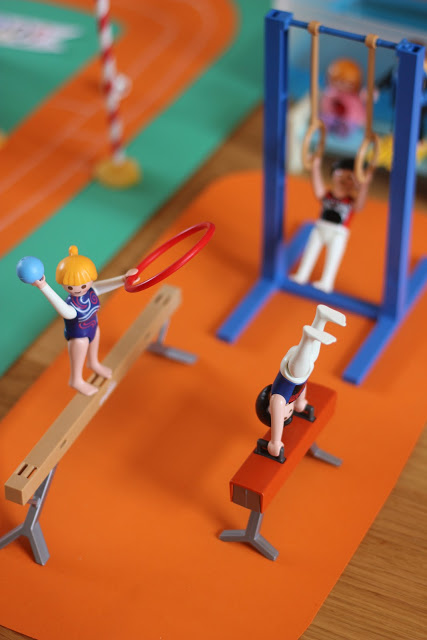 The athletes were extremely busy in the gymnasium! 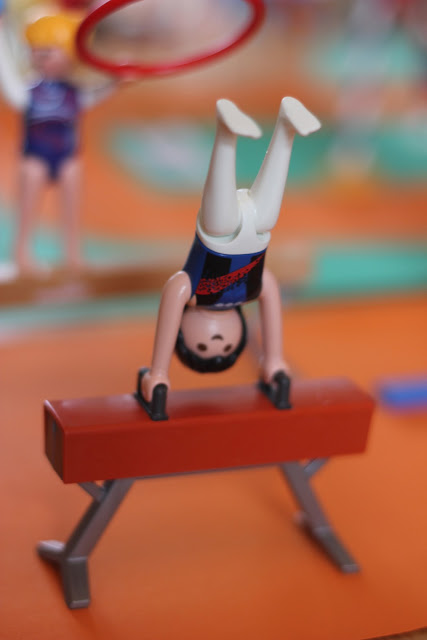 This guy was obviously showing off! 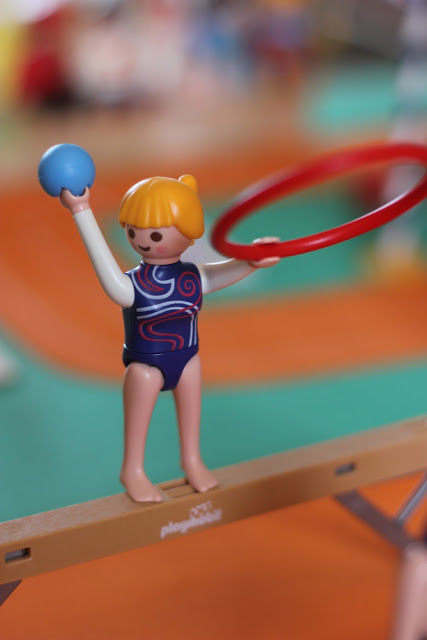 The lady gymnast stood on the balance beam with a ball and hoop at the same time- so talented! 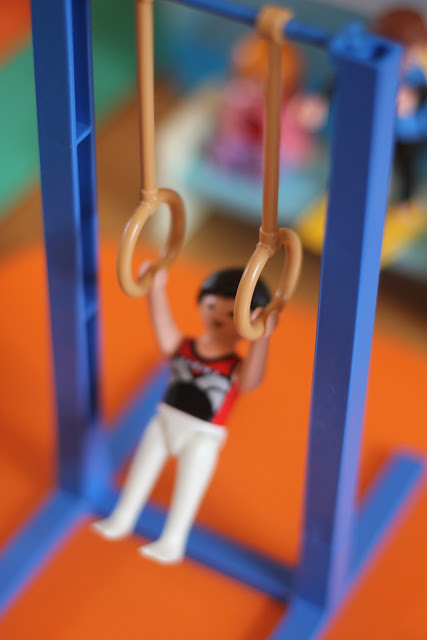 Swinging on the rings! Pop loved to push him on this swing like he was at the park and Cakie soon decided he was better off up-side-down. 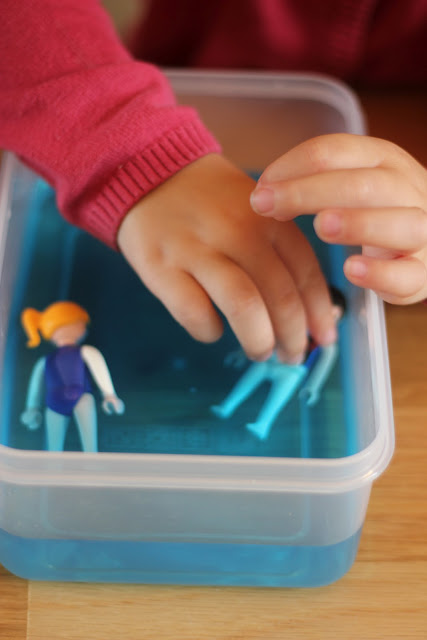 We made a swimming pool with a drop of blue food colouring in water, inside a plastic tub. Cakie made them race up and down in the water but no-one won because “everyone’s a winner in this race!” How very modern! 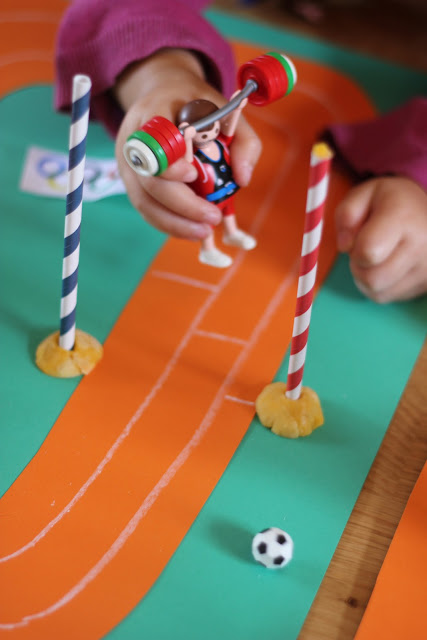 Pop thought the weightlifter may also want to score some goals, and he was a pretty accurate shot. 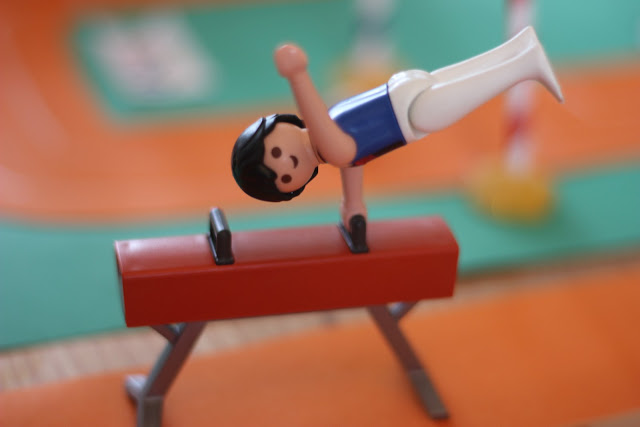 This guy continued to show off ridiculously! I can only presume he won the gold medal 🙂 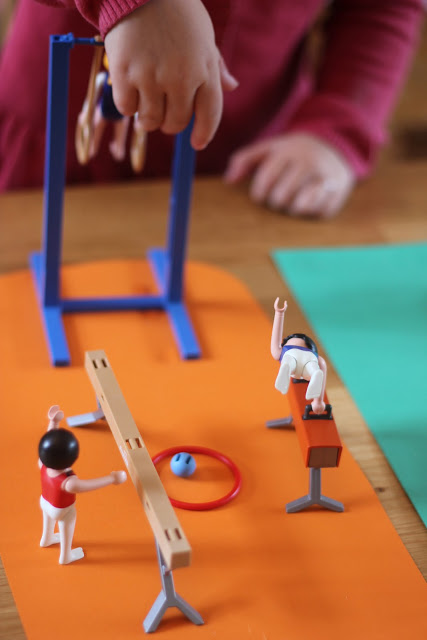 And Pop was very confident that weightlifter would be able to both run and jump while carrying his heavy load! Didn’t he do well?! 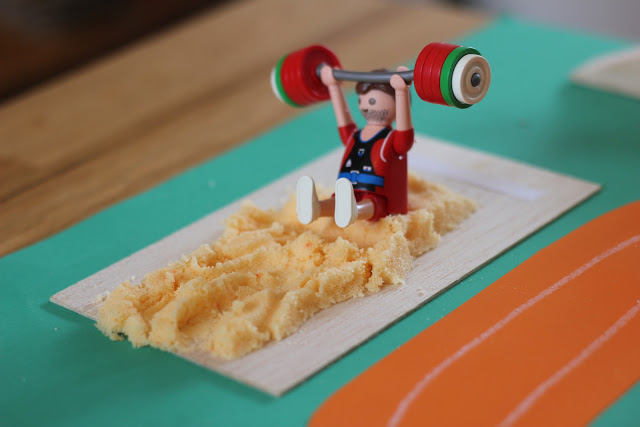 I’m so pleased to have found such relevant toys for such a significant event and the play set up has given us lots of opportunities to introduce how the games work and what will be coming up very soon!

Have you got any plans for celebrating the Olympics? Which are your favourite events?

You may also like to see our Olympic salt dough medals!