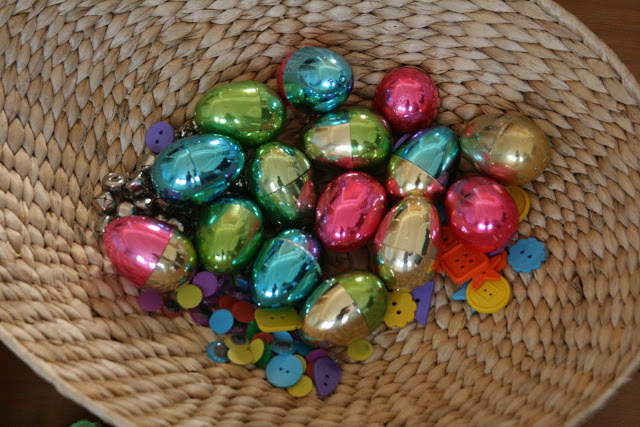 I do love the cutesy little Easter egg crafts, really I do, but while my children are young and not actually capable of completing them independently i just don’t see the point in doing them. There’s so much emphasis placed on achieving an end result, a pristine product to be proudly displayed, that we so often forget what these activities should really be all about. And that is children investigating textures and materials, discovering new abilities, being creative and imaginative, using their own initiative and learning how to play independently. 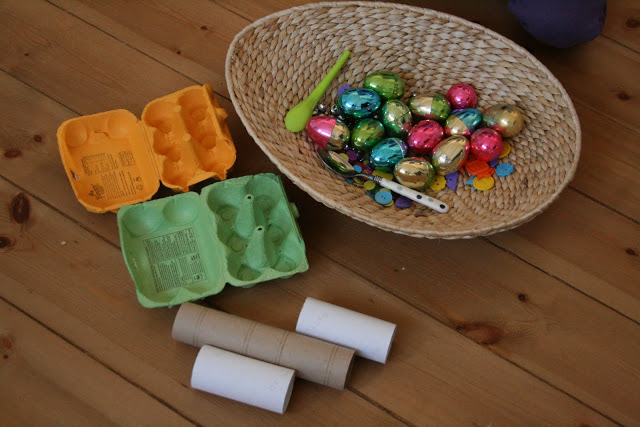 And that is why I love our Discovery Box idea so much, even though I’ve no doubt its “purpose” could confuse people. When I offer the girls a selection of materials I usually have no idea what they will plan to do with them and I just love to watch them investigating how objects move or open, whether they can be stacked or rolled, if they will fit inside other objects, how many there are and what they look and feel like. At ages 2 and 1, this is heuristic play at its basic root level- simply playing with objects. No end purpose in mind, no right or wrong, no little eyes and nose that have to be stuck on “just right”, just open-ended resources to encourage cognitive development and promote new ways to think and see. 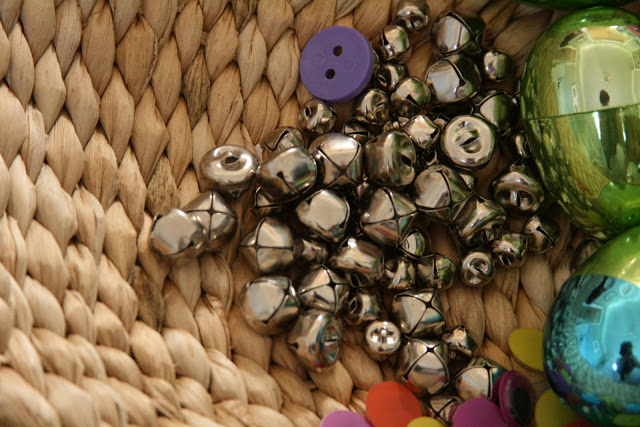 And with all that said, here is what was in the latest box/basket. A selection of shiny, coloured, plastic eggs (Sainsbury’s £2.) A pile of little bells of various sizes which made a lovely noise when shaken. 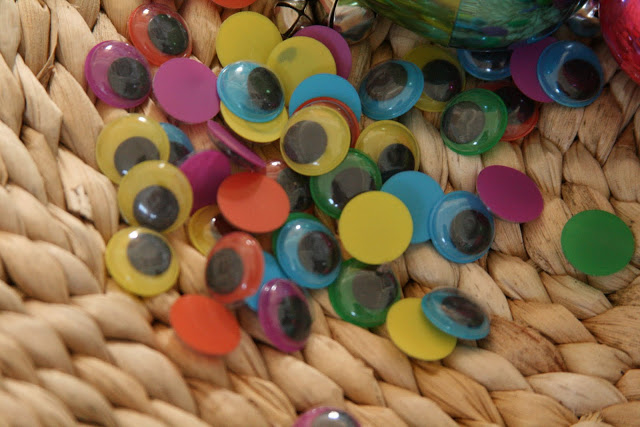 Some plastic googly eyes and a lovely selection of coloured buttons in different shapes (Paperchase £1.25) 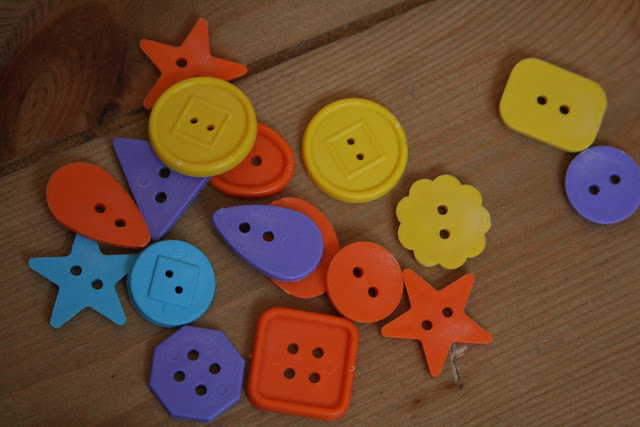 First of all they opened them all up. Then Baby Pop spent a long time concentrating hard trying to close them together again. She didn’t succeed at keeping them shut but did work out the open-close function. 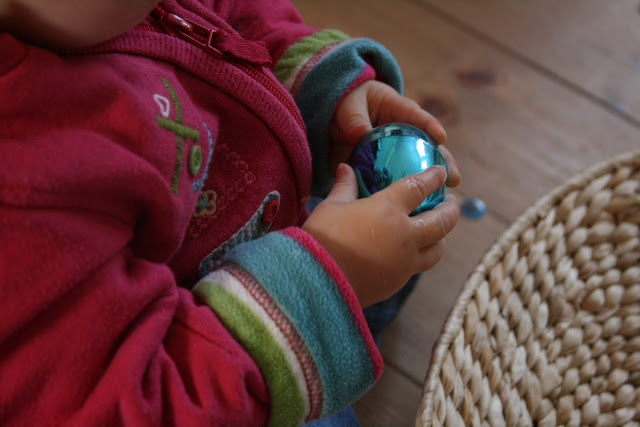 They both wanted to fill and empty the egg cartons and baby spent a long time making sure they fit into the holes, taking them out and putting them back again. Just to make sure! 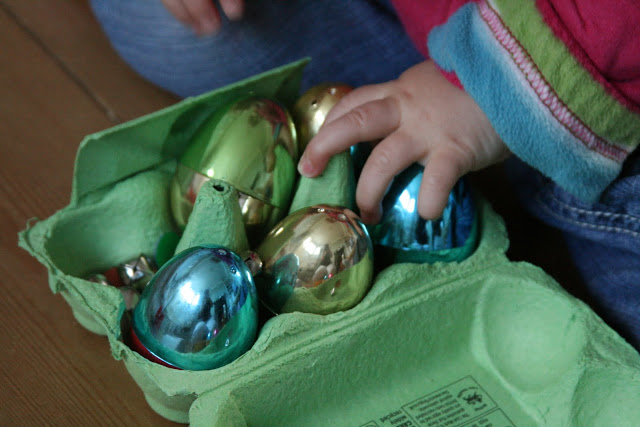 Cakes wanted to open them all up and started to make them into a line on the floor and counted them as she did so. She said “it’s a wiggly worm.” 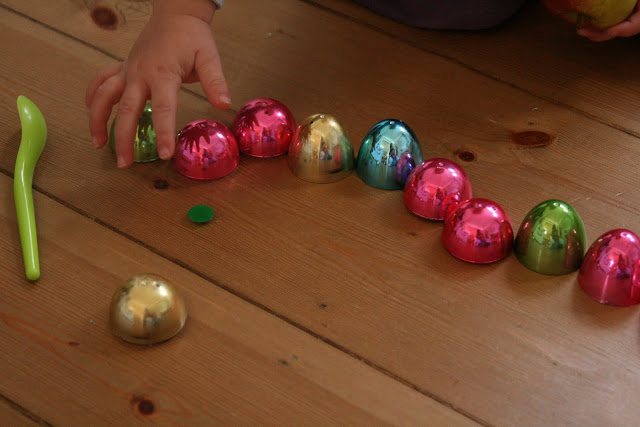 When C saw the spoons she started to mix up the bells, eyes and buttons in a frenzied cooking session, flinging them around the basket and out onto the floor. Cue much hilarity, as always! Then she scooped some bells into an egg and closed it with the other half to make some lovely jingly shakers, perfectly sized for little hands to hold. She continued with this, filling up lots of eggs with the various buttons and bits and pieces, until she had a whole box full. Baby Pop was allowed to have some and she was thrilled at the noise they made when shaken and rolled. 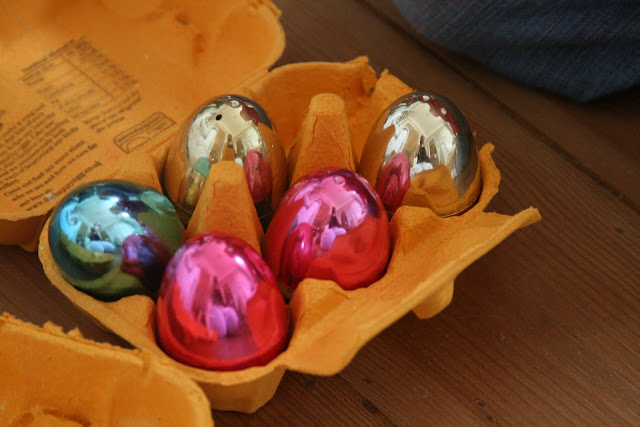 While they were creating wonderful music I was playing with some other halves and started to cover over some of the objects. Cakie noticed and said “YES! I hide and you seek!” (her name for that game!) and she popped various hidden items out of view and asked me to guess where they were. “Peekaboo blue star!” This could be extended to create a great memory game. 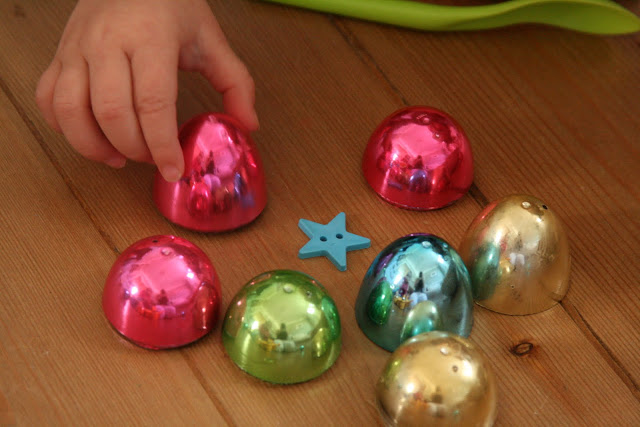 Baby Pop started to put some of the halves on top of each other and together they both built a few little leaning egg towers. 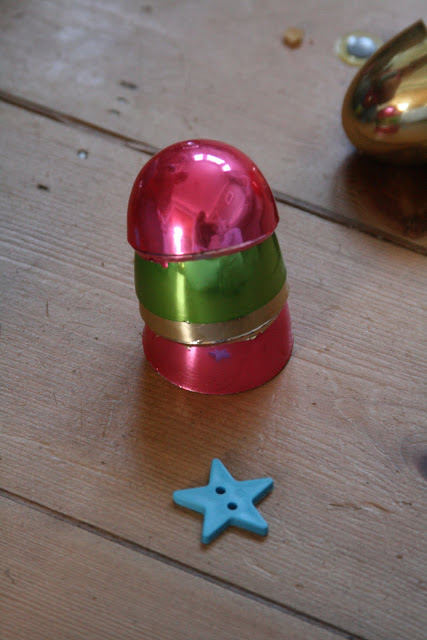 And interestingly, C discovered the flatter halves fitted perfectly in the up-side-down sections of the box. Something I wouldn’t even have looked at, let alone suggested doing. 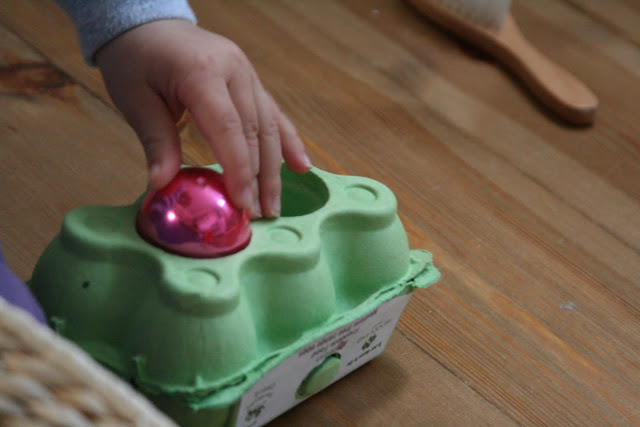 Later that day she took them all out to her water-filled TubTrug, tossed them in and then spent ages trying to fish them out with her new fishing net! Great gross motor activity and totally child-designed. 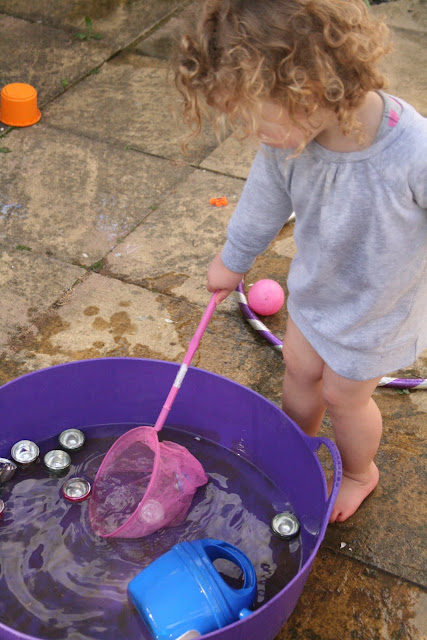 Then of course she needed to “put them out to dry” in the sunshine. There’s a little bit of science in that to be sure! And the cardboard tubes that were in the Discovery Box? Not interested in those one little bit! 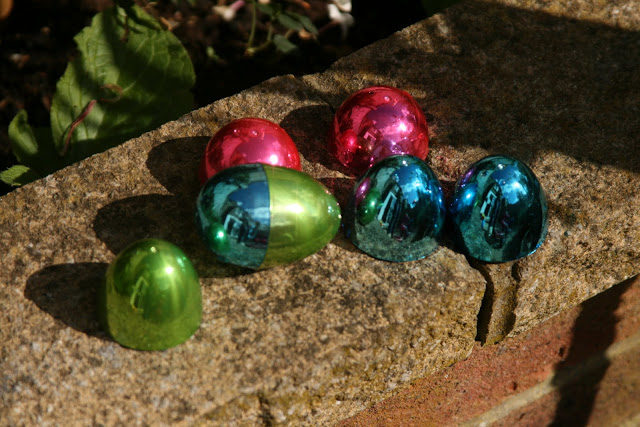