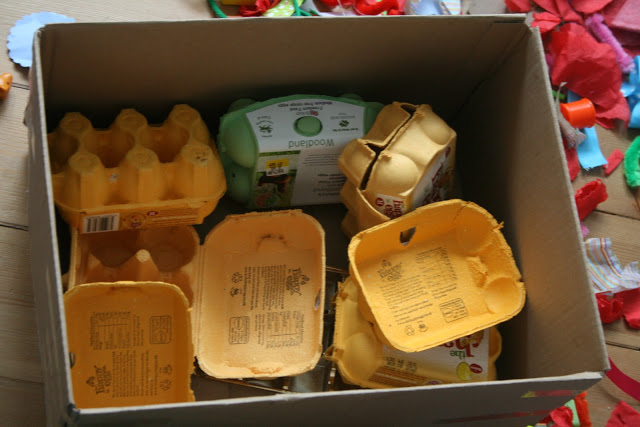 I gave the girls a big box filled with egg cartons and just sat back to watch them and talk to them as they decided what to do with them. This was a fun Discovery Box! Both girls played with it at their own level and were creative in their thinking, which is exactly what I’m hoping for every time I introduce new materials. Children just know how to play with everyday things so instinctively! 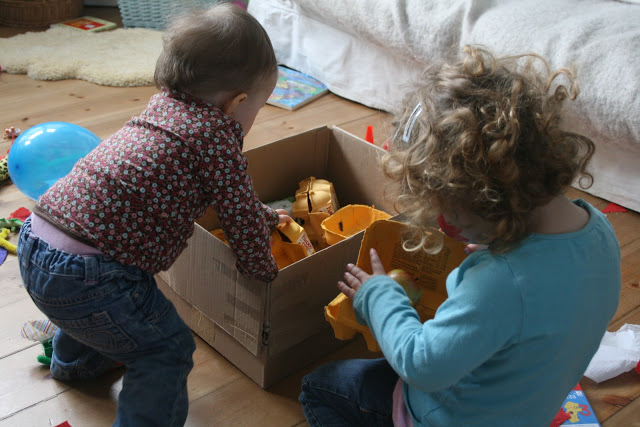 Of course the first thing to do was dive right into them and throw them all over the living room floor! 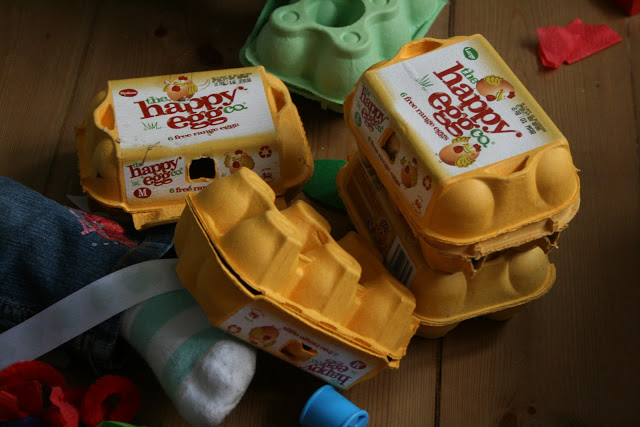 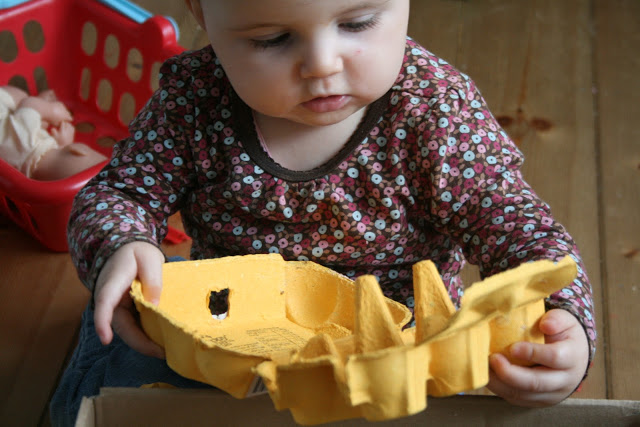 Cakie worked out how they closed and had to be pushed in slightly to re-open. Then she closed them all and started to use them like building blocks, stacking them into a tall tower. 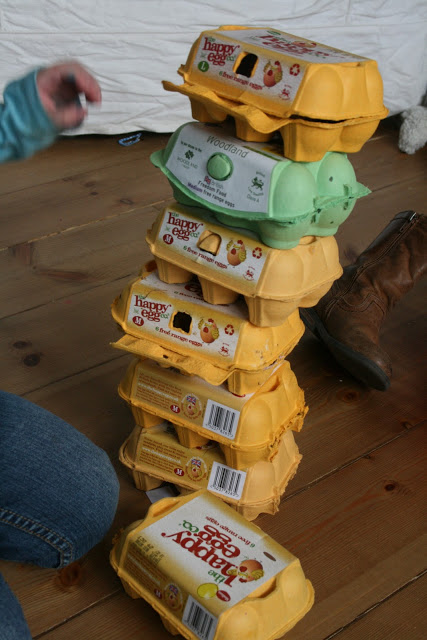 She got very impatient with Pop who wanted to come and push the tower over repeatedly. 🙂 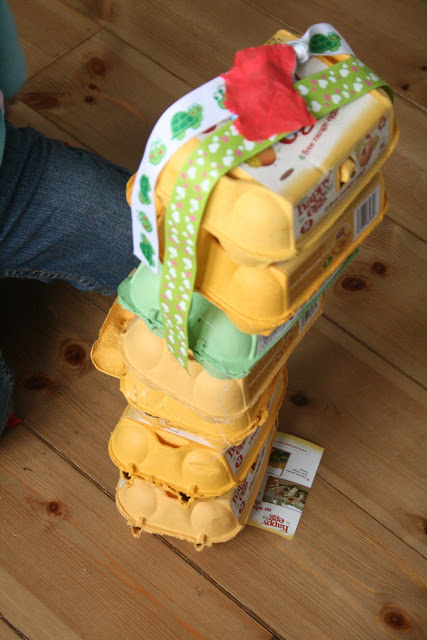 When she got a chance to finish stacking without Demolition Baby interfering, she laid ribbons on top to decorate it. 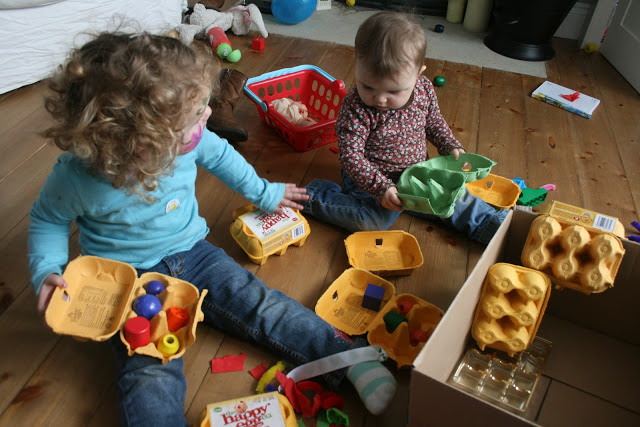 Then she started to fill them up using all of the little assorted bits and pieces from the “rainbow rummage” sensory box (from Pop’s first birthday.) These were her “treasures” and I think I could see the first glimpses of collecting her own special things together (something that most children seem to love to do!) 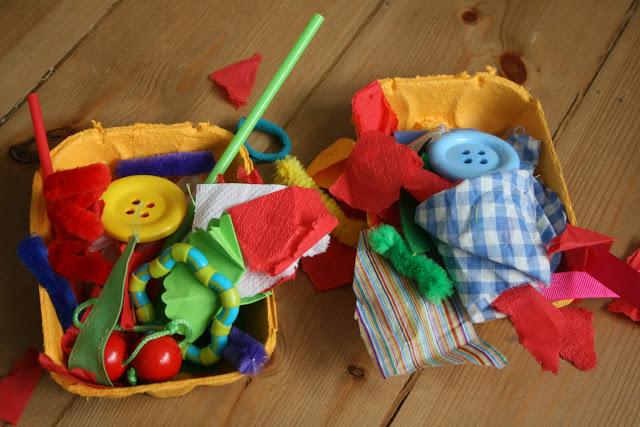 Baby looked on in interest, but spent most of her time emptying out the contents as quickly as C could fill them up again!
I have started to leave out the Discovery Box materials in a basket/ container for future play as I realised I wasn’t giving them enough time to come back and revisit the play again. This is so important for giving children a chance to build on and consolidate previous play experiences, and also to branch out into new ideas and creative projects. 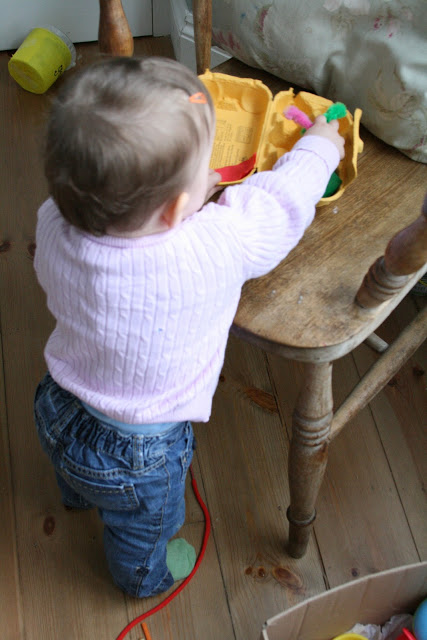 And here is what baby Pop did a few days later! She found herself an egg carton, put it on a chair and stood up so that she was at the right height. Then she scooted off to collect handfuls of goodies from the rummage box and brought them over to the chair. 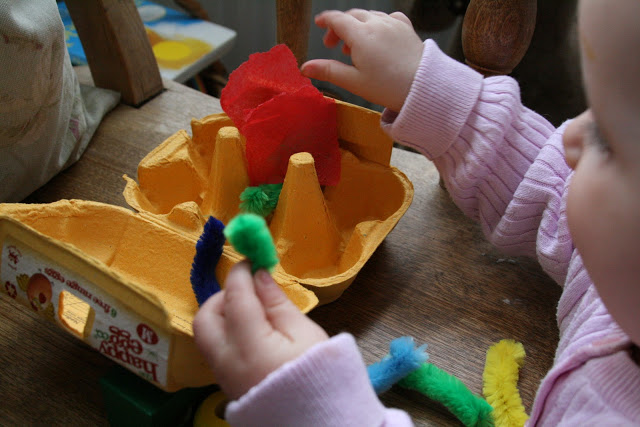 Then she made her own little collection of things in the carton, carefully arranging them in each section, filling and emptying, opening and closing, shaking the box and laughing, then tipping all the bits out and starting again! A lovely example of building on her previous play experience and imitating big Sister’s ideas.
Read about our other Discovery Boxes here.
This activity is good for:
* promoting independent play and thinking skills
* open-ended play
* early maths skills: capacity- filling and emptying containers, ordering, counting using 1:1   correspondence, sorting
* investigating textures
* balancing, building and stacking
* PSHE: making personal “collections” and treasure boxes