A full list of our Discovery Boxes and an explanation of Heuristic Play can be found under the labelled tab at the top of the page or click here. 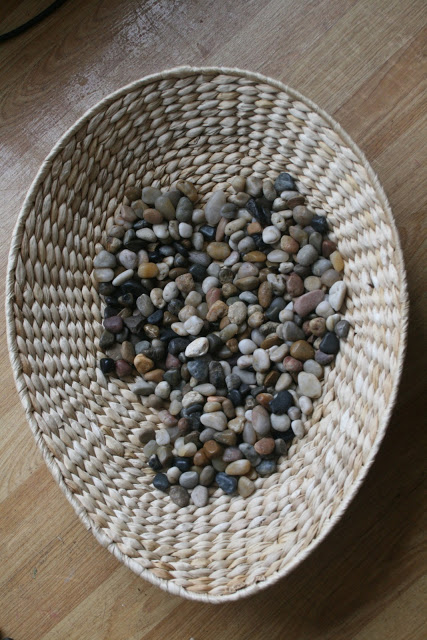 I found a lovely egg shaped basket and natural pebbles on sale in Ikea this week and just knew they would be lovely for a Heuristic play session due to the lovely contrasts between the two natural materials, as well as the opportunities for scooping, pouring, sorting and arranging. 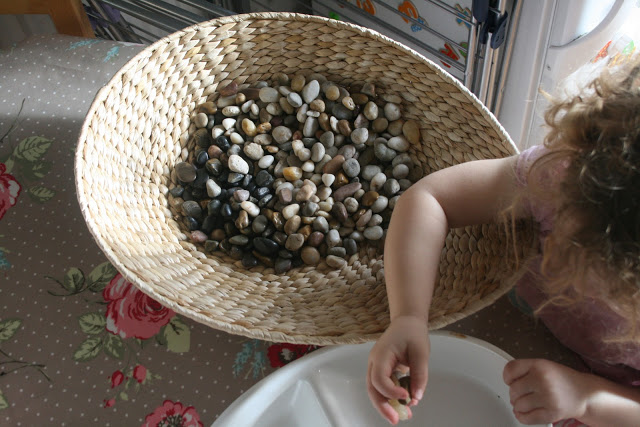 As usual with these Discovery Boxes (or baskets!), I didn’t intervene or suggest any particular way for C to play with the materials. I sat with her and talked to her as she busied herself and helped her to get things that she wanted to add and later I opened up new ideas for things to do with them as the play developed. 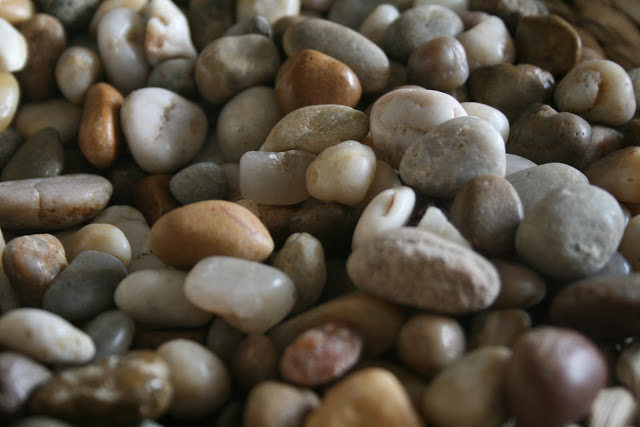 She enjoyed feeling the stones and picking them up and dropping them back into the basket. She asked for somewhere to put them so I got her a serving dish that had two sides, which gave an opportunity for sorting into two categories. First of all she just scooped the pebbles in, then tipped the rest and played with them by transferring between the different containers and spaces. 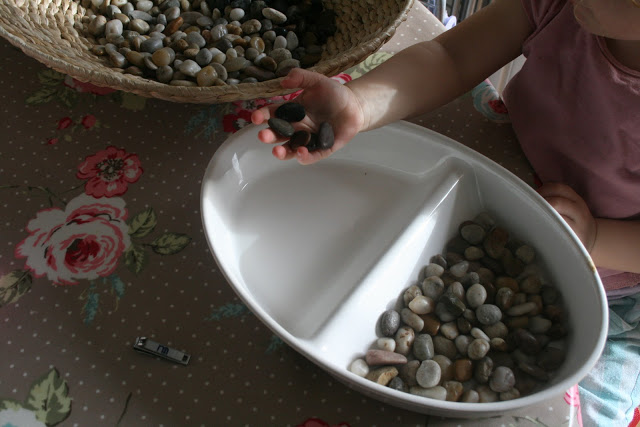 Then I started to pick some out and talked about the shapes, textures and shades I could see, keeping some of the dark ones on my side of the dish and leaving the lighter ones on hers. She started to describe them too and picked out some dark ones to give to me for my little collection, which was now taking over one whole side of the dish. 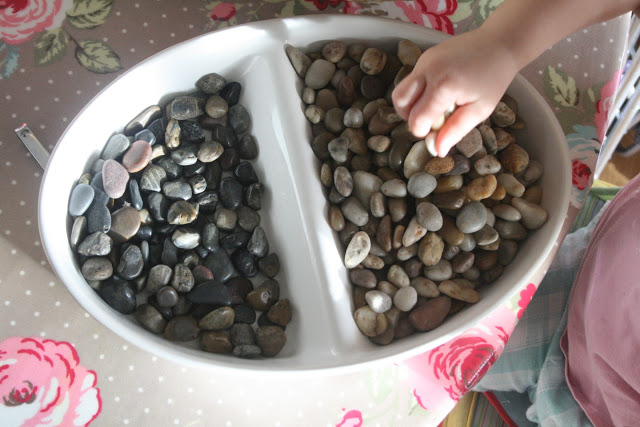 Then she went and helped herself to a whole pile of shaped ice-cube trays (also from Ikea- love them!) and lay them out so that she could drop a pebble or two in each hole. 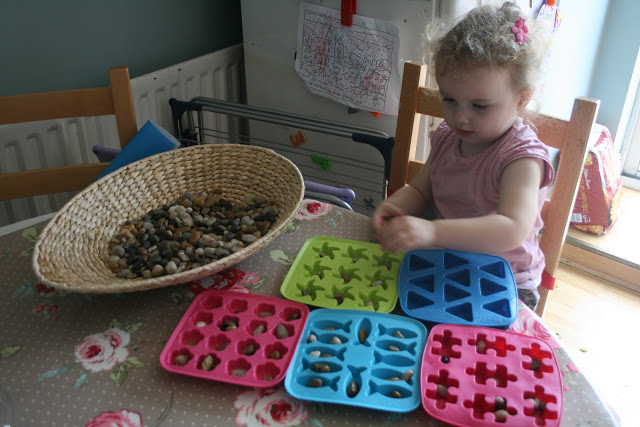 She narrated what she was doing as she went along, naming the shapes of the holes in the trays and talking about “filling it all up.” 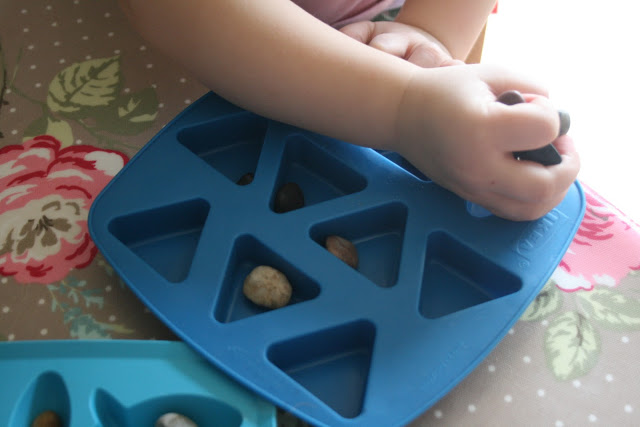 This automatically led onto counting and she used 1:1 correspondence for some of the time, by pointing at each hole. 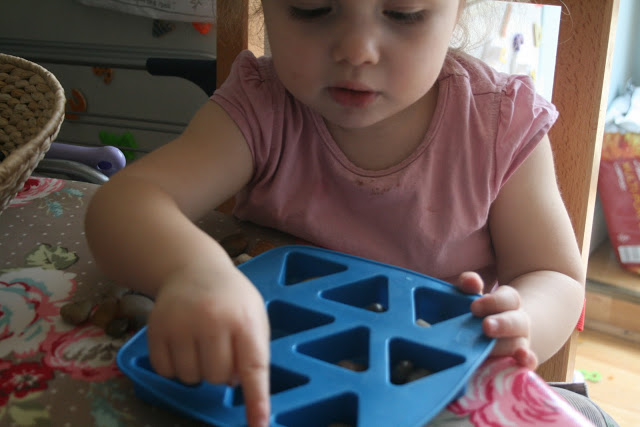 Then she stacked them up and told me that they were “all done” and went off to play somewhere else. 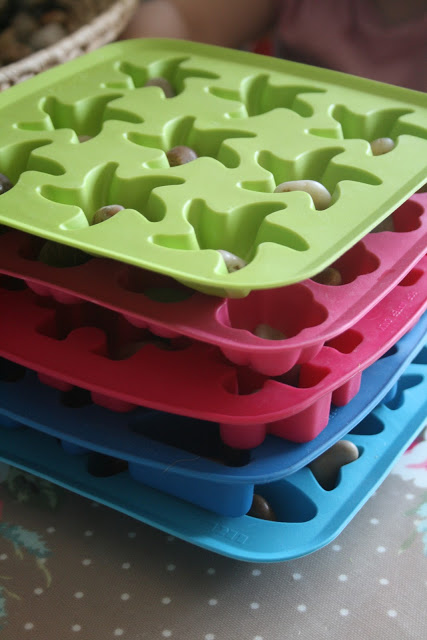 And later on I found this little treat on the kitchen floor! “It’s a road for the choo choos” incase you can’t tell 😉 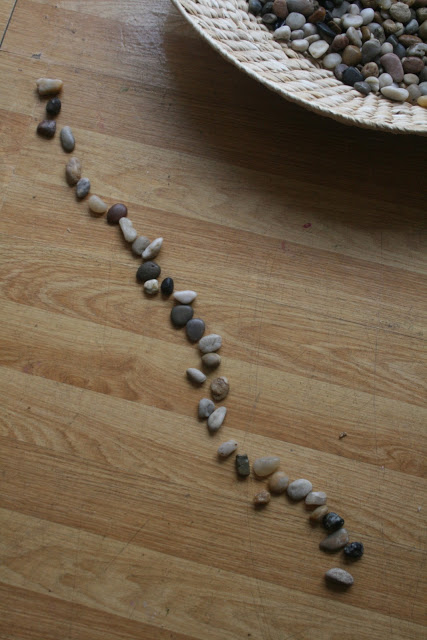 This activity is good for:
* sensory and tactile play
* fine motor skills: pincer grip, transporting small objects
* counting using 1:1 correspondence
* sorting and matching objects according to one or more criteria
* describing the properties and appearance of materials
* imaginative, creative and cognitive development

« We’re Going On A Colour Hunt!
A Birthday Tree! »