Following on from the fun of the first Discovery Box (or bag) I made another one for Cakie this week and she loved it much more than the first one. Again, I didn’t have a box big enough (I need to get some packing boxes out of storage!), so I just covered this with a big piece of material, which worked out fine.
I wanted this heuristic play session to be loosely based around rolling, using ramps, chutes and tunnels. I put some multi-coloured ping pong balls (10 for £1 at Decathlon) in a little box underneath a cardboard slide structure that I made really easily by bending a large piece of cardboard and sellotaping it into an A frame shape. I then scattered the cardboard tubes, packing tape rolls and middle sections of plastic bottles (from last week’s Discovery Box!) and covered the whole lot up. 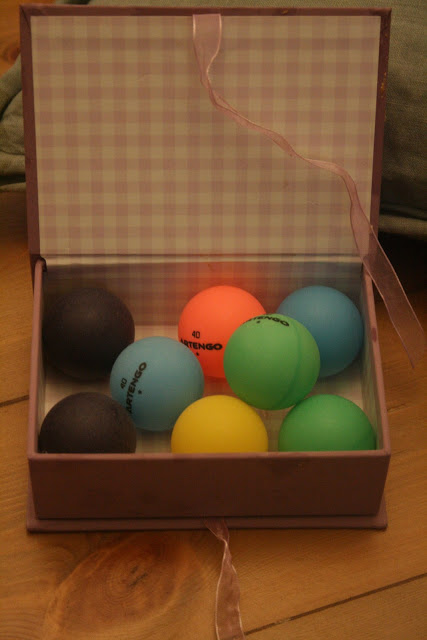 I didn’t get a picture of it before she unwrapped it as it happened a little quickly! 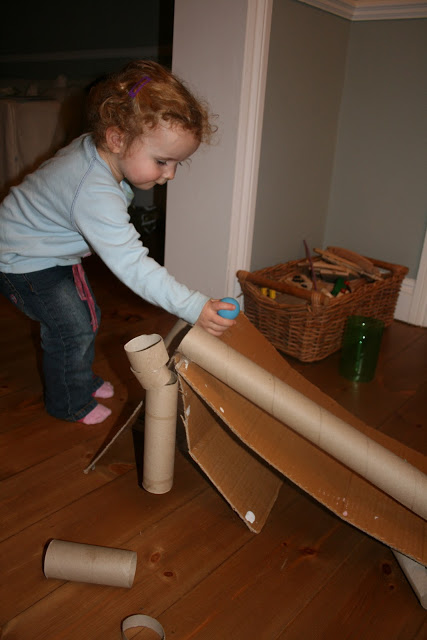 She immediately set about rolling the balls (ummm, after throwing them around the room first, of course!) This produced huge amounts of laughter and hilarity to see them rolling so quickly down the ramp. 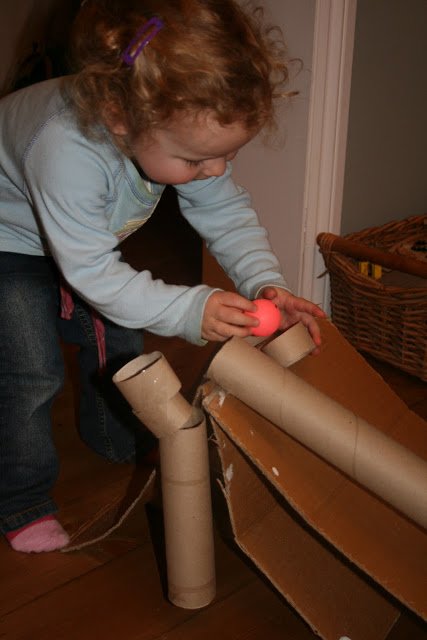 I suggested sticking one of the tubes off the side and she then got lots of other ones, especially the little ones I had cut up, and added them all over the ramp, asking me to “tape, tape” here, there and everywhere. I hadn’t expected her to want to add things and actually build onto the structure, but it made it quite interesting. She then posted the balls down the chutes and told me to catch them at the other end. 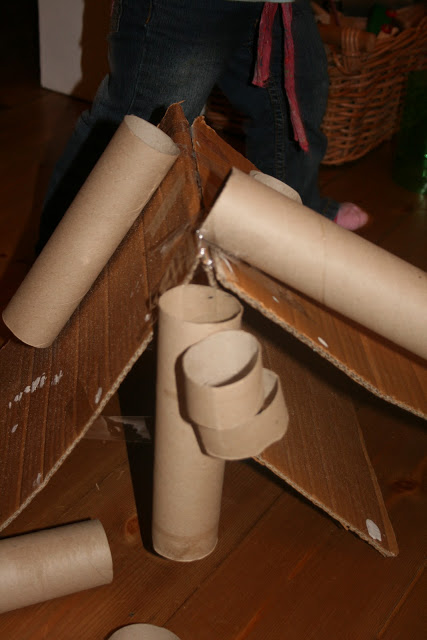 We stuck on one of the plastic bottle parts and she went and got all of her trains and immediately started to drive them through it like a tunnel. 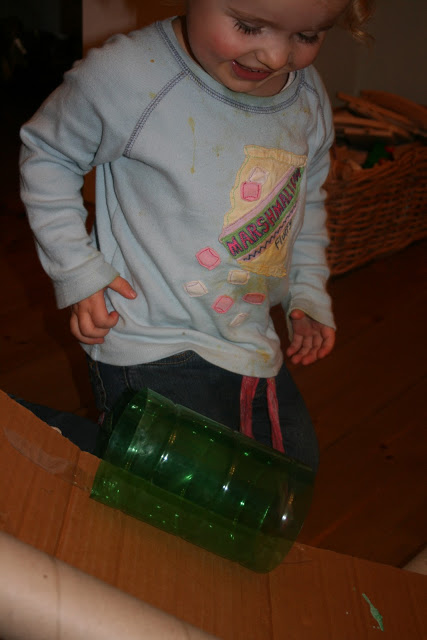 All sorts of other things got posted through chutes, rolled down the ramp and  driven through tunnels. She even tried with a huge, heavy bouncy ball which completely flattened the ramp altogether. 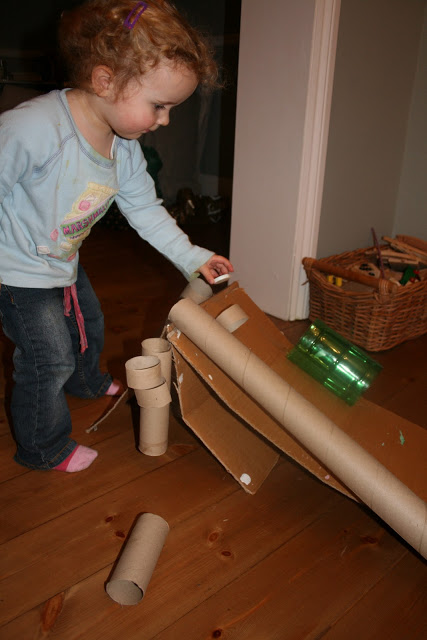 Lots of joy and excitement from simple pleasures! 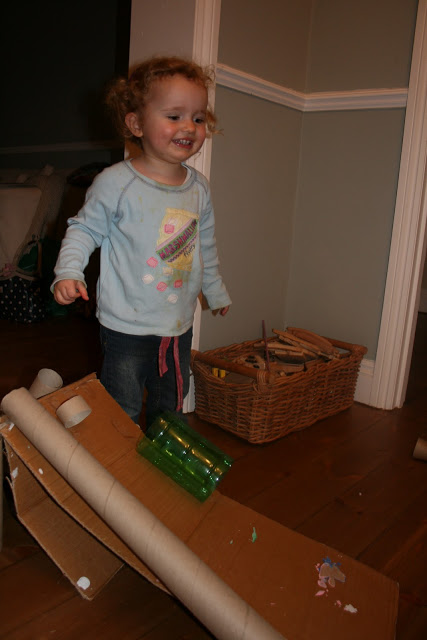 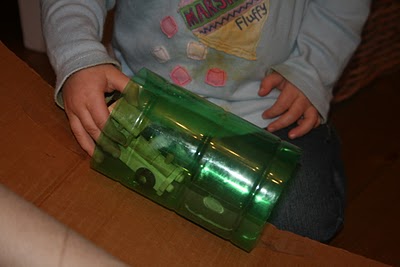 Adding more to the structure. 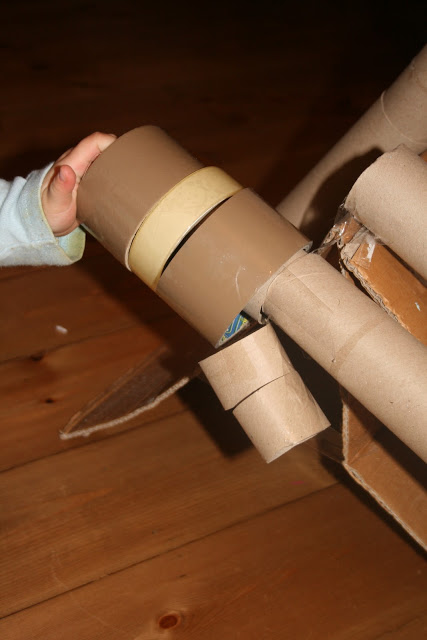 The finished piece. Again, this got pulled out and played with a few times that day and the next before I finally dismantled it. I reckon we can get at least one more use out of those recyled materials! 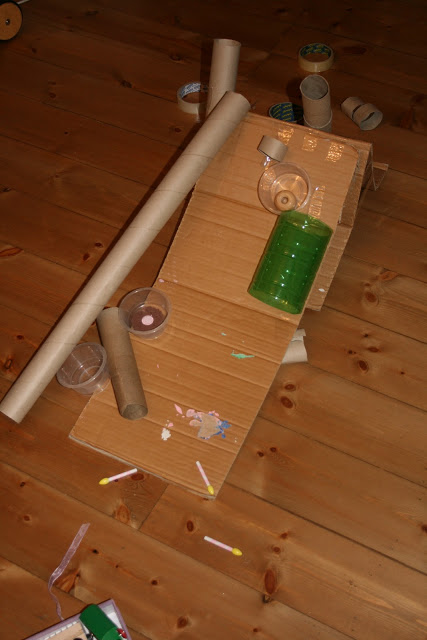