Set  up an open-ended maths activity for kids using counting manipulatives, play dough and a dice, in a dip tray! With opportunities to practise counting, 1:1 correspondence, matching amounts to numerals and simple addition and subtraction games, this can be adapted for all ages and stages of mathematical development (and is plenty of great fun!) 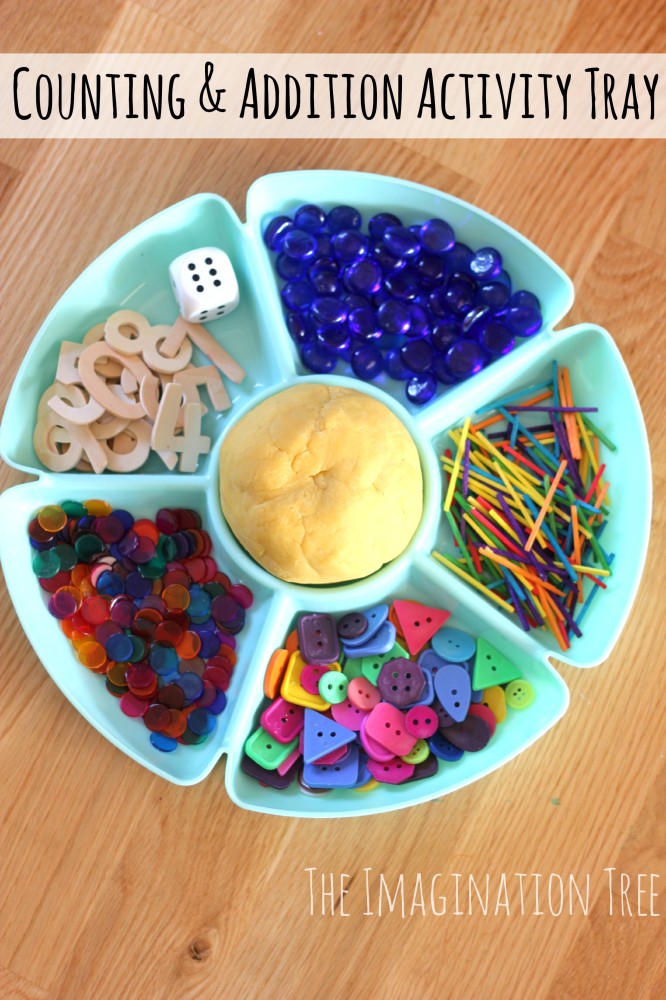 Welcome back to another Playful Maths activity, co-hosted with Learn with play at Home. We are bringing you more activities using play dough as the main material, one of my absolute favourite ways to play with kids!

For this activity I wanted it to be as open-ended and child-directed as possible, presenting a tray of loose parts for counting and addition games. I recently found these fabulous dip trays on offer in the picnic section at the supermarket and we have been using them for setting out Invitations to Play ever since.
Into the trays I added:
transparent counters
coloured shape buttons
plain wooden numerals
blue glass pebbles
coloured wooden matchsticks
large dice
a large ball of easy non-cook play dough

I suggested rolling the dice and counting how many spots were on the face as it landed. Pop enjoyed doing this and we worked together on her 1:1 correspondence (i.e. that she actually touched/ moved a spot/ object each time she said its number name, not just vague pointing or skipping over numbers.) Then she started to add the same number of objects as the number she had counted on the dice. This took some practise to go back and make sure the two amounts tallied up. She enjoyed doing the same activity using all of the different materials in the play dough. 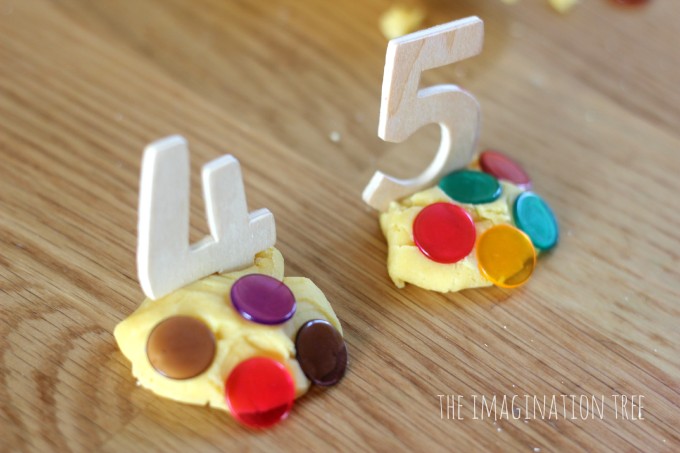 Cakie had the extra challenge to create two (and then more) balls of dough, and to start off with the same activity as Pop. She rolled the dice, counted out the matching number of objects into each ball of dough, found the wooden numeral to represent each amount and then turned it into an addition game! She added together both sets of objects and then found the total amount, finding the matching wooden numeral to give the correct answer. She repeated this lots of times, using different materials to push into the dough, then adding another ball of play dough to combine three amounts together, which resulted in larger total amounts. This was a really good extension activity for her. 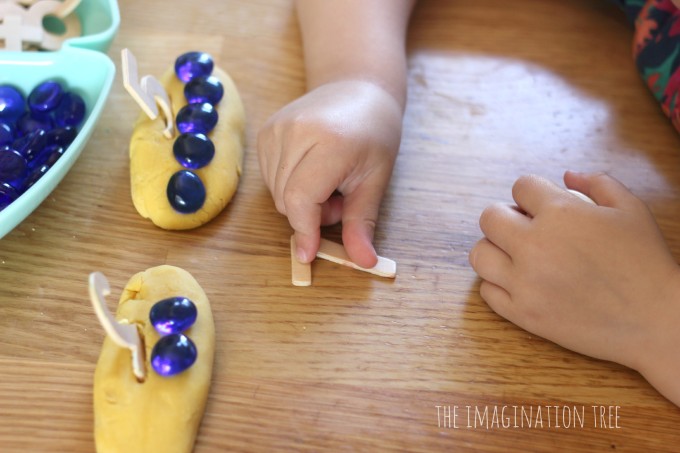 The next steps would be to try subtracting small amounts instead of adding, by rolling another dice to find out how many to take away. Children could also start to write down or record the number sentence in some way if they are keen to do so.
What they are learning as they play:
maths: recognising numerals, counting objects using 1:1 correspondence, combining and adding two or more sets of objects to find a total
creativity: using mixed media to make models
See the rest of the Playful Maths activities from our series here!
Follow our Playful Maths board on Pinterest for all the ideas in one place!
Check out the fabulous Play dough Measuring Snakes from Learn with play at Home
See our pattern making with play dough, spaghetti and beads here!