Learn the alphabet and letter sounds in a fun and active way by jumping and tracing over chalk letters on the trampoline! A great way to get some exercise and learning outside at the same time! This can be extended or simplified for all kids from toddlers to school age and is so easy to set up and wash away again. 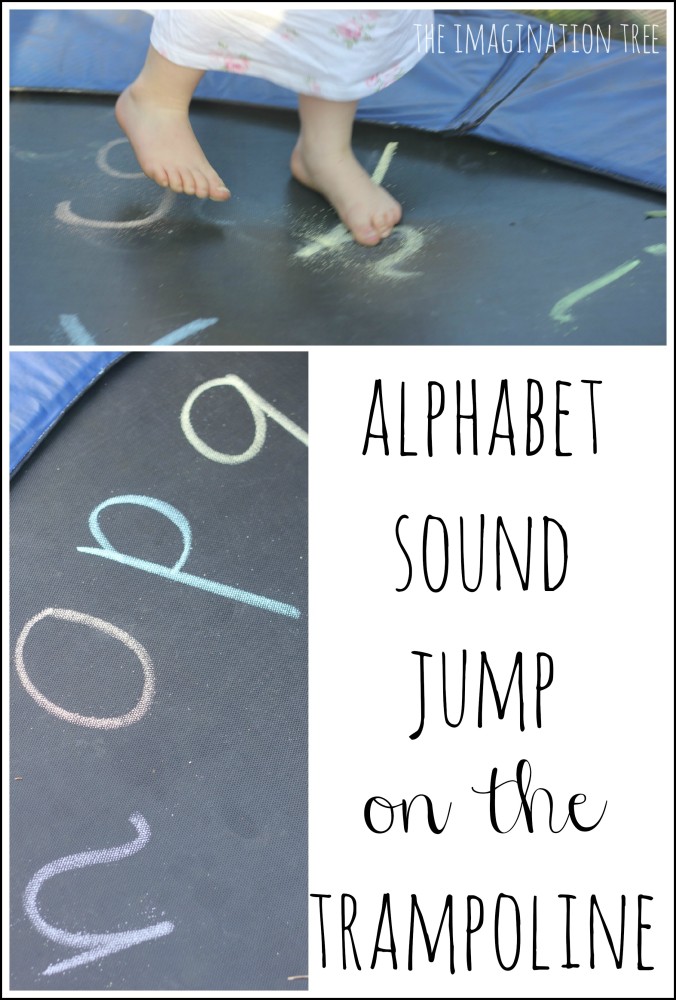 My kids absolutely love their trampoline in the garden and use it every day, which is great for keeping them active all year around. They often choose to make up role-play and imaginative games in there too so it seemed a fun idea to extend a little learning and creative fun to one of their most frequented outdoor spots. 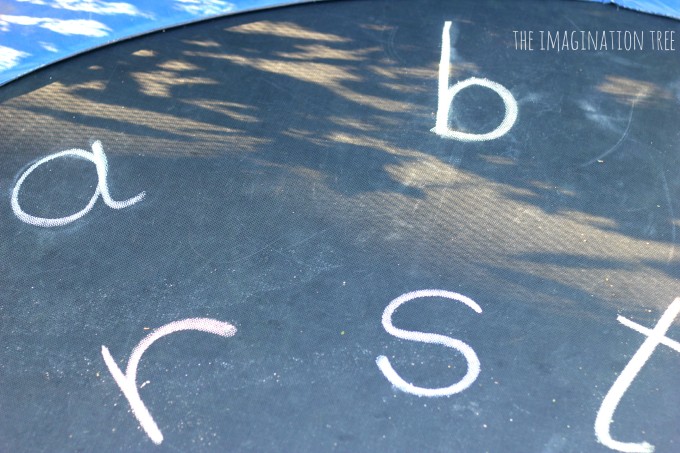 Using some large, chunky chalks I wrote the letters of the alphabet in lower case, all around the outside edge of the trampoline mat, spiralling in to the middle. The chalk takes to the mat really well and rubs off really easily, with all the residue removed completely by wiping over a damp cloth (or waiting for it to rain!) 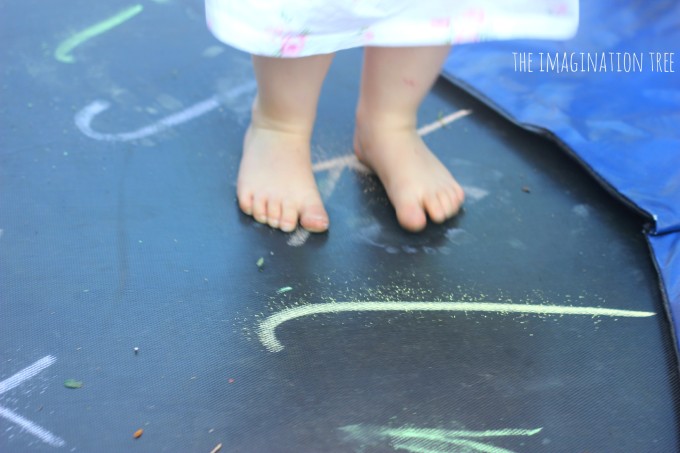 Then they set about jumping on each letter in the right order, singing the alphabet song and whizzing around from one spot to the next in a heap of giggles. Next I called out a variety of sounds and they had to land on the corresponding letter name, and vice versa. This was great practise for Pop who is  just learning most of her sounds now. 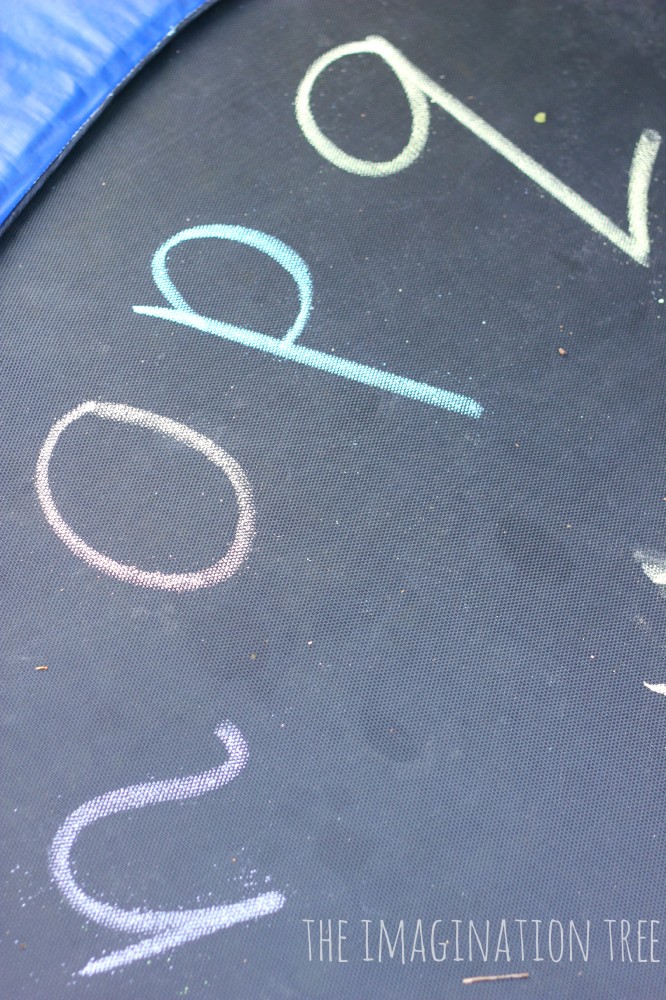 For Cakie I was able to extend it by asking questions like “can you find and jump on the sound at the beginning of the word Banana?”,  “which sound is at the end of the word Cat?” etc . You could also ask older kids to jump to spell out small CVC words in the right order or to search for blend sounds and digraphs/ trigraphs.

After this they were keen to have a go at writing with the chalk themselves. Pop practised her letter sounds by tracing over the ones I had written, and this was a good media for her to use as the chalk is large and easy to hold in the right position, and the movements involved are on a large scale. 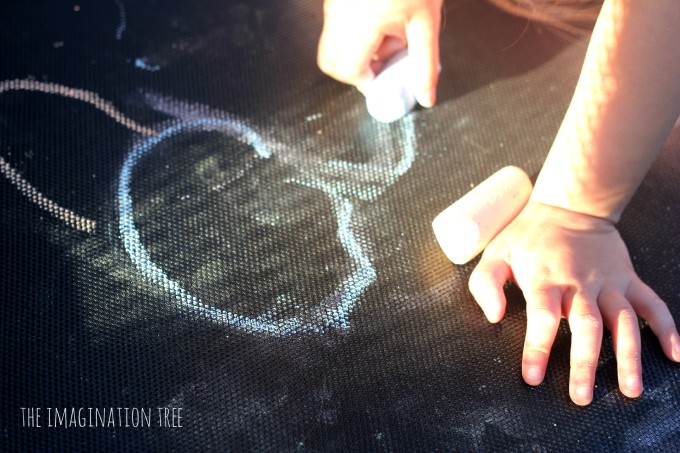 They also practised writing their names and Pop traced over one I had written for her. Cakie wrote some small words independently and attempted to sound out new ones by herself. If they were worried about making a mistake they simply rubbed off the chalk and started again, making it a great, low-pressure mark making material for beginner writers! 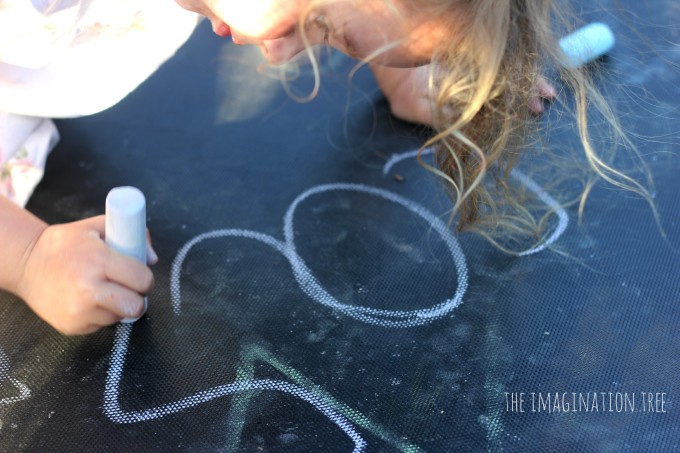 Together we also decorated the trampoline with lots of doodles and patterns, long after bedtime. It would be a lovely place to hang out and get creative together on warm summer nights, perhaps bringing some stories and cushions too to make a camp out story tent!

Here are plenty of other activities for learning the alphabet together!

And here is our whole Playful Literacy category to browse too!