Here is a simple volcano piñata cake recipe which makes a fantastic addition to a dinosaur or science themed birthday party for kids (and adults too!) Add a sparkler candle to the top for real WOW factor! 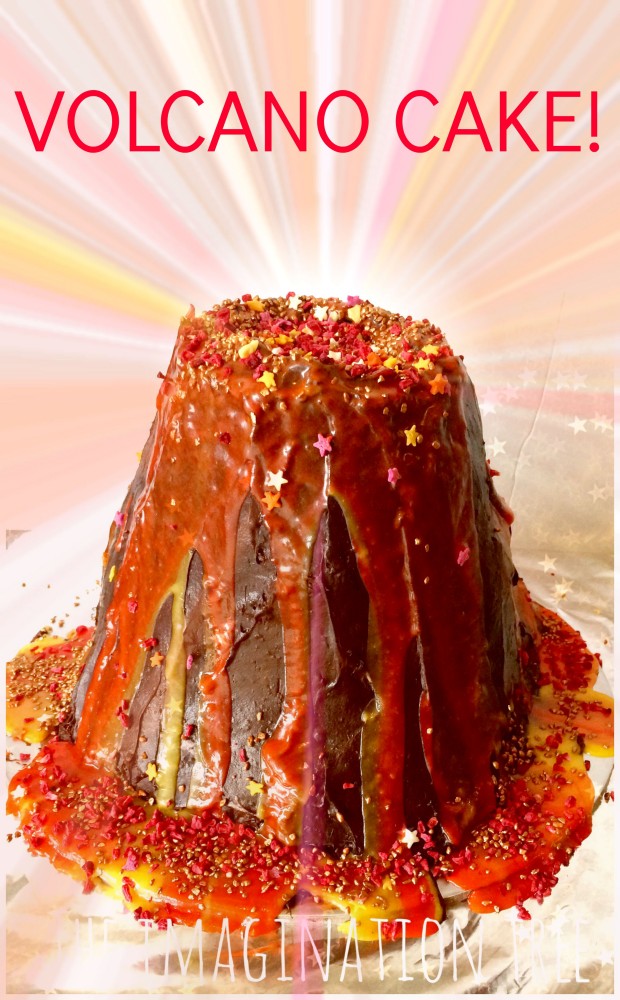 This year, my creative eldest daughter asked for a science themed birthday party to celebrate turning 7. She planned many of the details herself, including how she wanted her own “erupting volcano cake” to look, after the original idea was suggested. She is so keen on the volcanic eruption science experiment using bicarbonate of soda (baking soda) and vinegar, that this seemed like a fun twist to celebrate that!

And since piñata cakes are so easy to make, that became an additional feature which was lots of fun when we cut into it.

To make this cake I trebled our usual all-in-one sponge cake recipe, as I needed to make lots of layers to make it tall. You could just do the same with your favourite, trusted recipe too, or follow mine. It’s SO easy.

Here are the instructions for the trebled amounts:

Simply combine all of the ingredients in a bowl, using an electric mixer. I find it works best to combine the dry ingredients first, followed by the soft butter, then the milk and eggs. When it is smoothly mixed together, pour the mixture into 4 tins. You can use whatever you have to hand. as it’s a very rough process.

I wanted to make the bottom layer the widest as it was going to be the base support for the volcano shape, so I used a square shaped tin. The middle two layers were made in the same size 8 inch tins and the top layer I made in a smaller, 7 inch tin so that the overall appearance is of reducing in size towards the top.

Cook them at 180 degrees Celsius for 25-30 minutes, and check that they are ready by inserting a skewer to make sure it comes out clean. When they are completely cool, layer them from largest cake at the bottom to smallest at the top, sandwiching them together using icing/ frosting. I cheated and bought some ready made chocolate frosting as it’s a great time saver, but it is also very easy to make.

Once secure, take a sharp knife and start to shave off pieces of the middle two cakes at a 45 degree angle so that the shape of a volcano starts to be formed. It doesn’t have to be perfect as it will soon be covered up! Slightly round of the corners of the bottom layer too.

To make the piñata surprise, use the knife to cut into the middle of the top cake and go down as far as you want the treats to be hiding inside. This also forms the crater of the volcano. I filled the hole with orange, yellow and red smarties to represent hot molten lava, with the plan that they would all pour out as the cake was cut into. 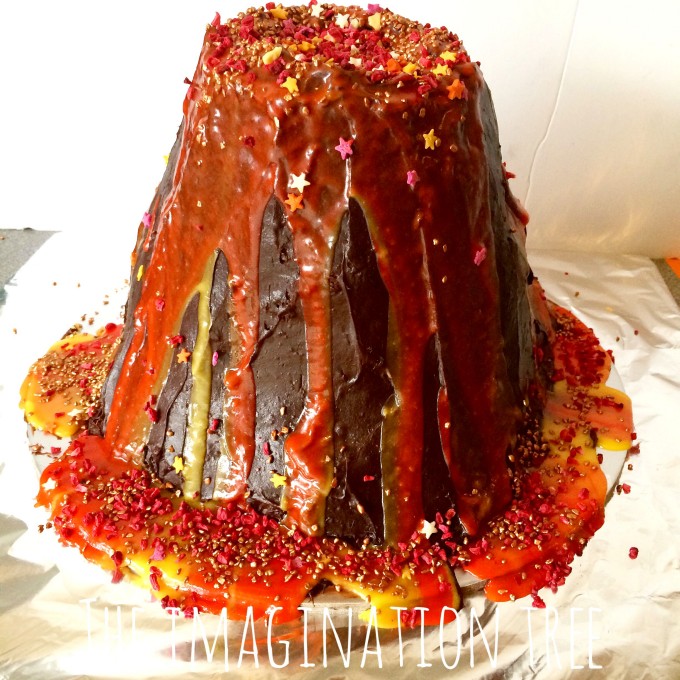 Cover the whole cake with a base layer of chocolate frosting and don’t worry too much about the crumbs that get caught in it as this layer won’t be seen. Either pop it in the fridge or leave it to dry a little for an hour, then come back to it and smoothly apply a top layer of frosting all over the first. Thankfully it doesn’t have to be to perfect to represent a volcano and lots of it is going to be covered anyway!

To make the appearance of molten lava erupting from the volcano, I simply mixed up a very straightforward icing recipe using icing sugar (confectioner’s sugar) and water. I don’t even have the proportions for this as it’s something very easy to do by trial and error, but generally speaking you need a very small quantity of water in comparison to sugar. Start with approximately 2 cups icing sugar (around 450g) and add water 1 tbsp at a time until the mixture comes together smoothly and is thick yet runny. When it is pourable it should be the right consistency to add to the cake, but make sure it’s not too watery as it will just run straight off!

I made three different colours from the one batch of icing by adding colours in the following order; yellow, orange, red. So, add a few drops of Wilton Icing Colours in yellow first, then pour on a few large spoonfuls of that from the centre of the cake and let it trickle over the edges to the base. Then add a few drops of orange to the remaining yellow icing in the bowl and repeat the process. Lastly, add the red to the existing goring and our over the last of it. I tried to pour at slightly different angles so that all of the colours could be seen, although they do mix together in parts too.

The icing dries shiny and glossy and looks really effective! 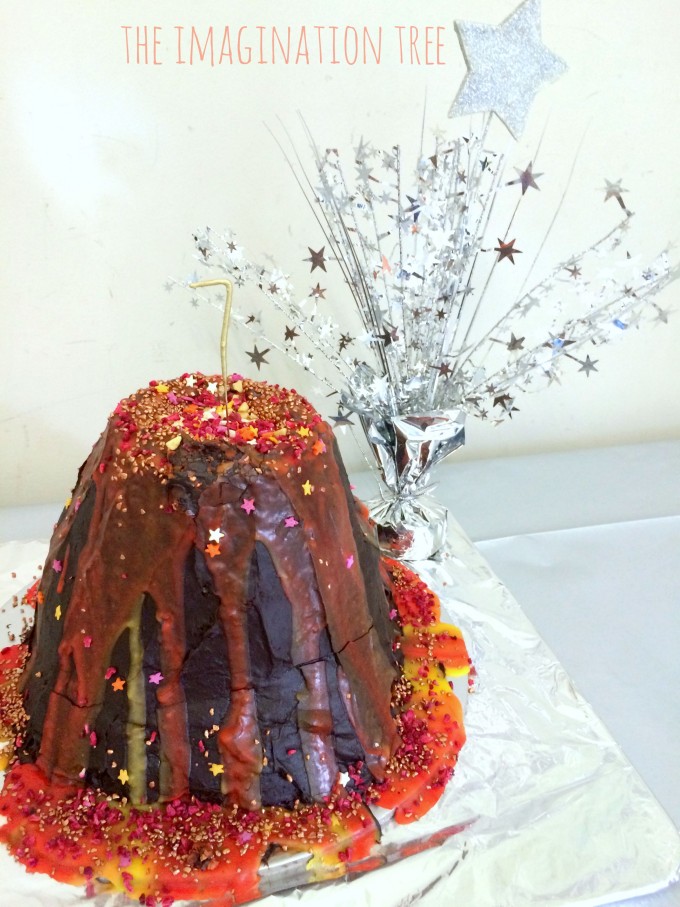 Over the top of the icing, while it is still wet, add sprinkles and finishing touches to make it really sparkle and pop! I managed to find bronzed sprinkles, freeze dried raspberry pieces, tiny bits of honeycomb and red and orange sprinkle stars at Waitrose.

At the party I stuck in 7 sparkler candles and a candle fountain (a giant cake sparkler!) and it looked A-mazing when it was all ablaze, just like a real volcano! Unfortunately I didn’t manage to snap any pictures of it like that as I was aware of safety first, but I’m sure you can imagine the effect. Birthday girl was pretty thrilled and that’s what it was all about! 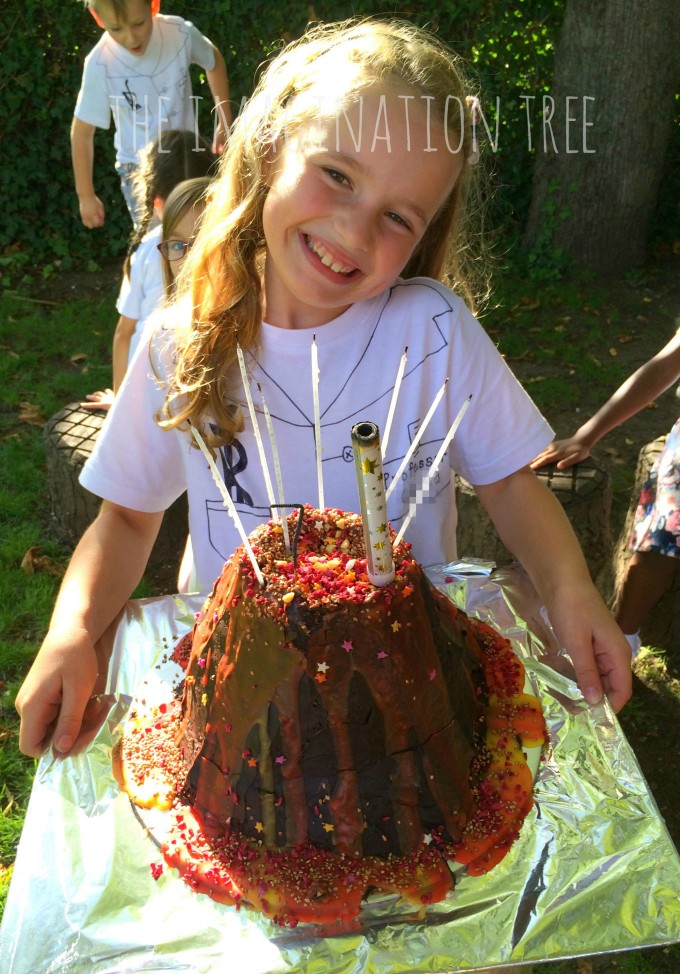 Soon I shall write up all of the details of the exciting science birthday party itself. Come back soon to read more!