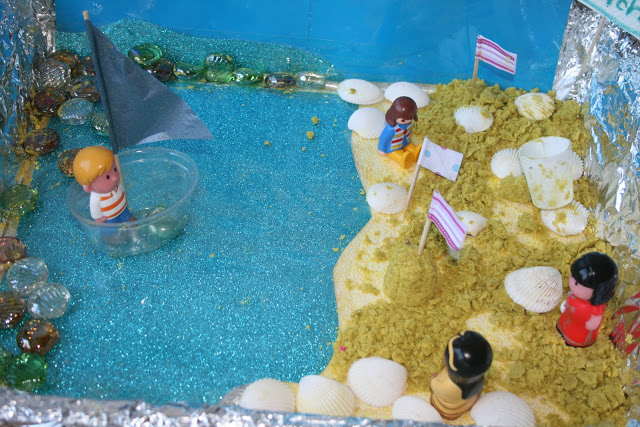 This may seem like a strange small world scene to set up at the beginning of February when it is still freezing cold outside and summer seems a long way away! But we have been reading lots of stories recently that include trips to the seaside and Cakie has become completely absorbed with the idea of going to the beach and swimming in the sea. So much so that the other morning she woke up at 5am crying and saying “but I want to go to the seaside NOW!” 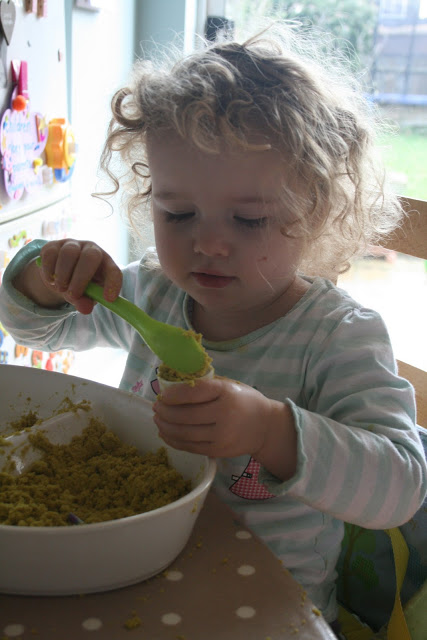 So, since going to the beach is not really a favourable option at the moment, we have brought the beach to the house instead. Cue the buying of Moon Sand. I have seen this advertised and was sceptical at paying 3 times the price of normal sand for what just looked like coloured sand, but actually I’m really impressed with it! It has a lovely texture and moulds really easily, retaining its shape without being as messy as normal sand. (No, I’m not getting sponsored to say this, though a few freebies wouldn’t go amiss!) 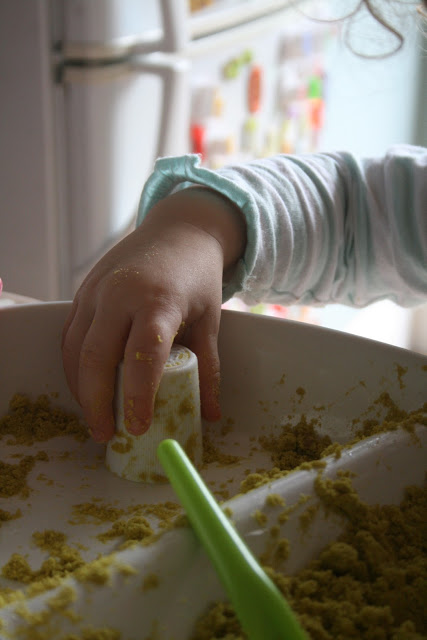 I put the sand in a dish with some spoons and the bottle top from a mouth wash which happened to look just like a miniature bucket shape. And she spooned the sand in and tipped it out to make mini-sandcastles. She was delighted! (and seems to say sandcastles with a Northern accent which is freaky!) 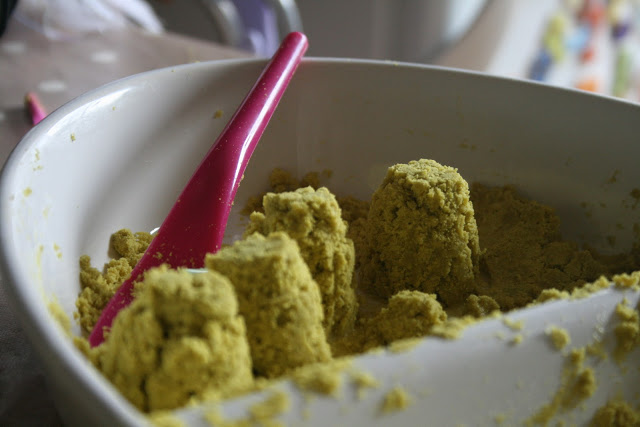 I found a few bamboo BBQ skewers and glued a little piece of coloured paper to them to make little flags to sit on the top. 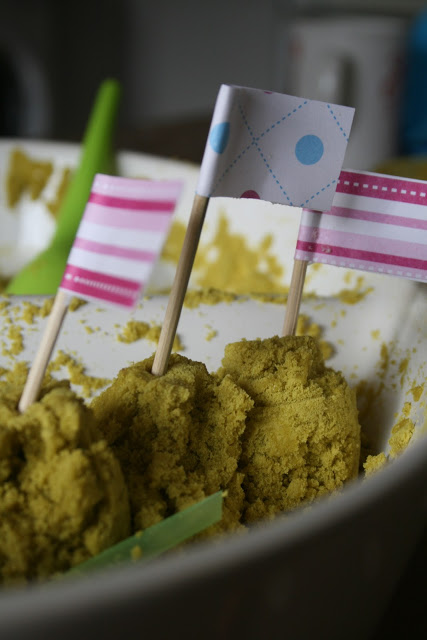 After she had been playing for an hour solidly, I realised this needed to become a little bit more of a permanent set up, so we set about making a small world play scene together. I drew some clouds and sun onto sheets of A4 blue card and laminated them. 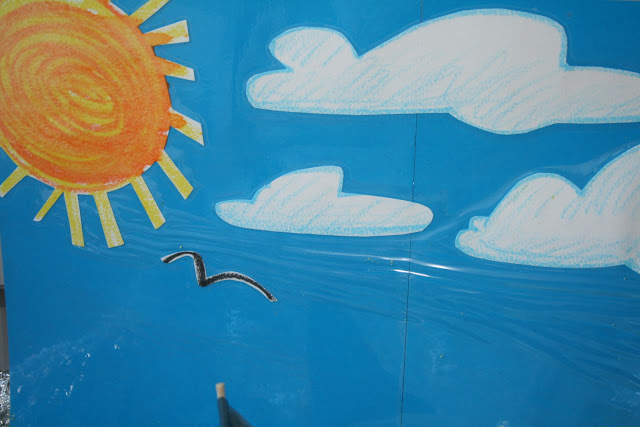 I found some wonderful, sparkly blue wrapping paper that I had been saving for something special (I have drawers full of such stuff, thanks to a very patient hubby!) and I cut it into a wavy shape then laminated it. Then I coloured another piece of paper yellow and brown to represent sand and did the same. I laid these at the bottom of the garden tray , after first lining it with sheets of aluminium foil. 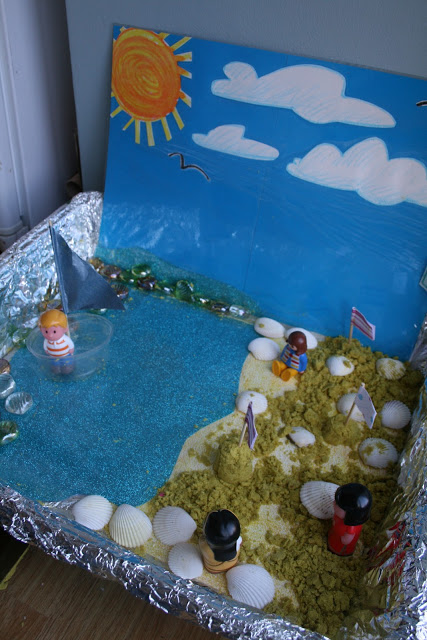 Then we tipped in the Moon Sand and went to find little play people and some other finishing touches. 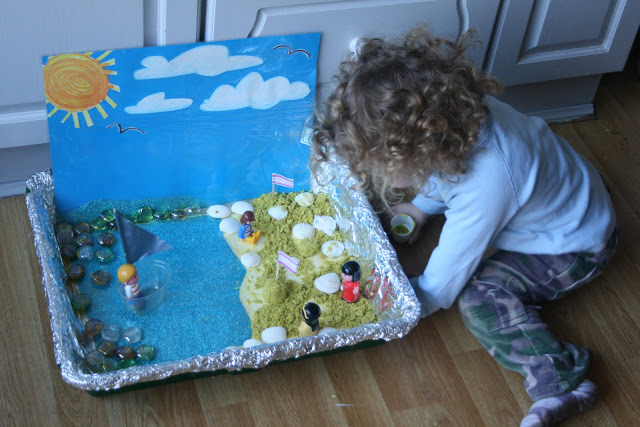 In my recycling basket I found a yoghurt pot that I had been saving because it looked just like a boat. So I used another bamboo skewer and a piece of paper folded into a sail to make a little boat for the people to sail in. 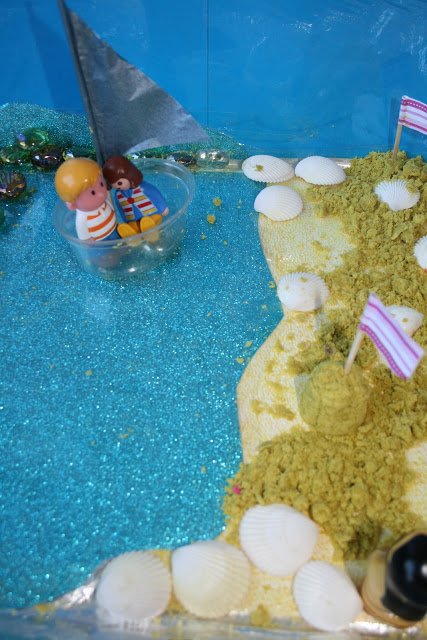 The other day we picked up a bag of shiny glass pebbles and a bag of shells for £1 each. They were perfect in the play scene! 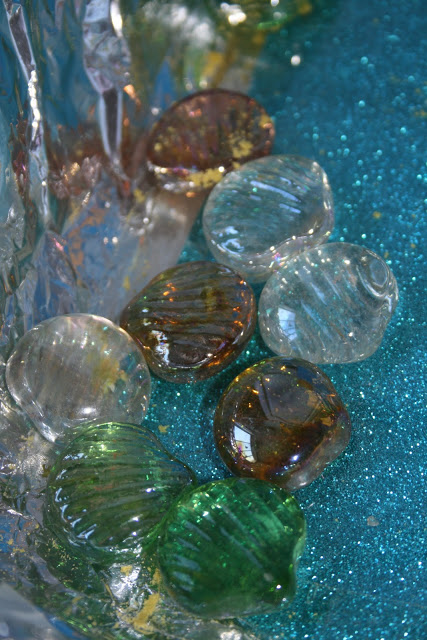 And then it was all ready for playing with! 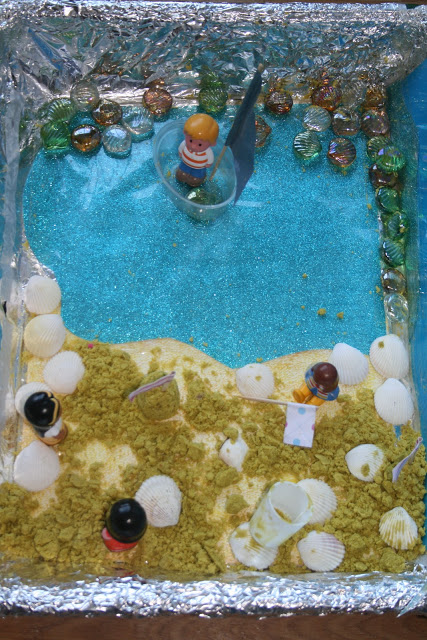 The shells made beautiful patterns when pressed into the sand on their backs. Cakie “oooed” quite a lot! 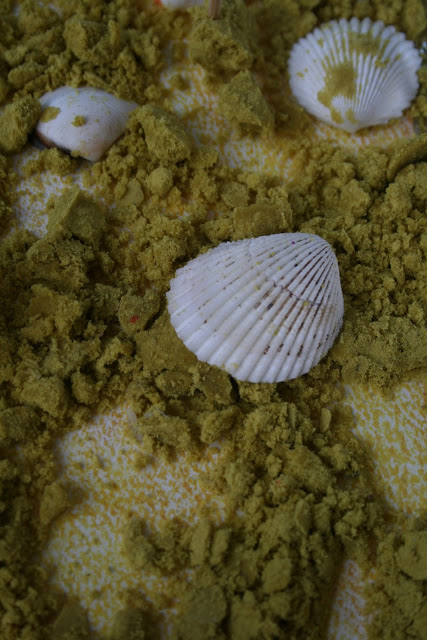 We played together for quite a while, telling stories about the people who were at the beach and what they wanted to do next. This little boy just loved going in the boat while the girls on the beach sunbathed and made lots of sandcastles!

Chilling by the shoreline. 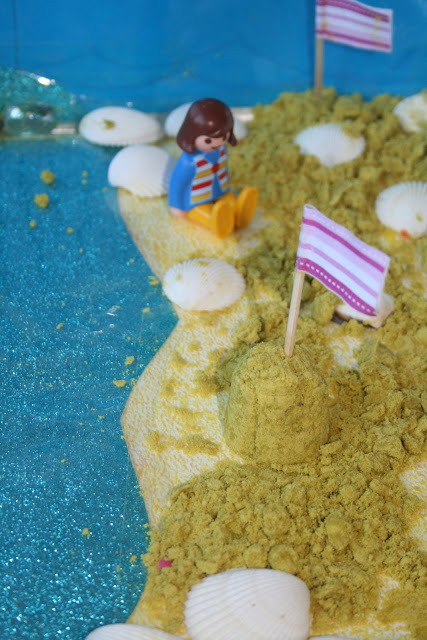 And we read her favourite seaside story from The Shirley Hughes Collection called Lucy and Tom at the Seaside. It’s such a lovely, traditional story that contains everything good and wholesome and wonder-filled that is childhood. 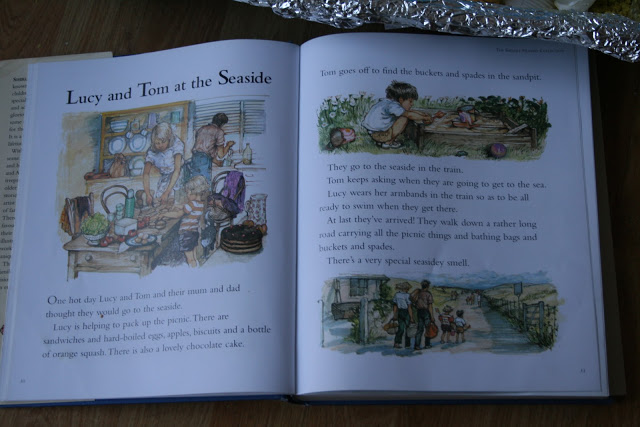 If you don’t own any Shirley Hughes you really should. Or borrow them from the library 🙂 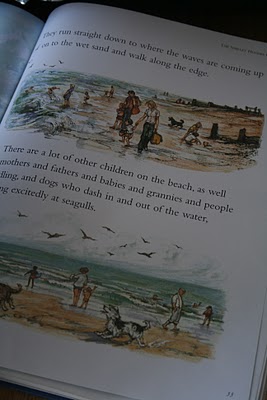 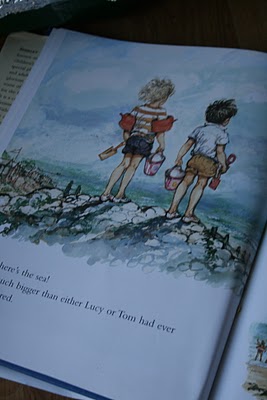 You can read the book while doing yoga positions too. 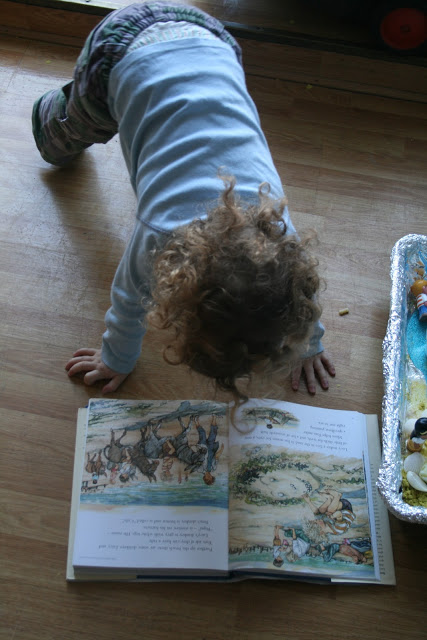 The small world scene is going to stay out for playing with in the kitchen until all the sand has finally disappeared, then we will pack it up and turn it into something new. Happy days!

Read about our small world “Park in the Snow” here and “Construction Site” here.

This idea is shared at