Set up a fun sight word activity for kids using simple, DIY pirate gold doubloons hidden to make a treasure hunt in the sand tray! Adapt this for letters of the alphabet for those learning their initial letter sounds, or numbers to create a maths themed focus instead. Hands on, pirate learning fun for all! 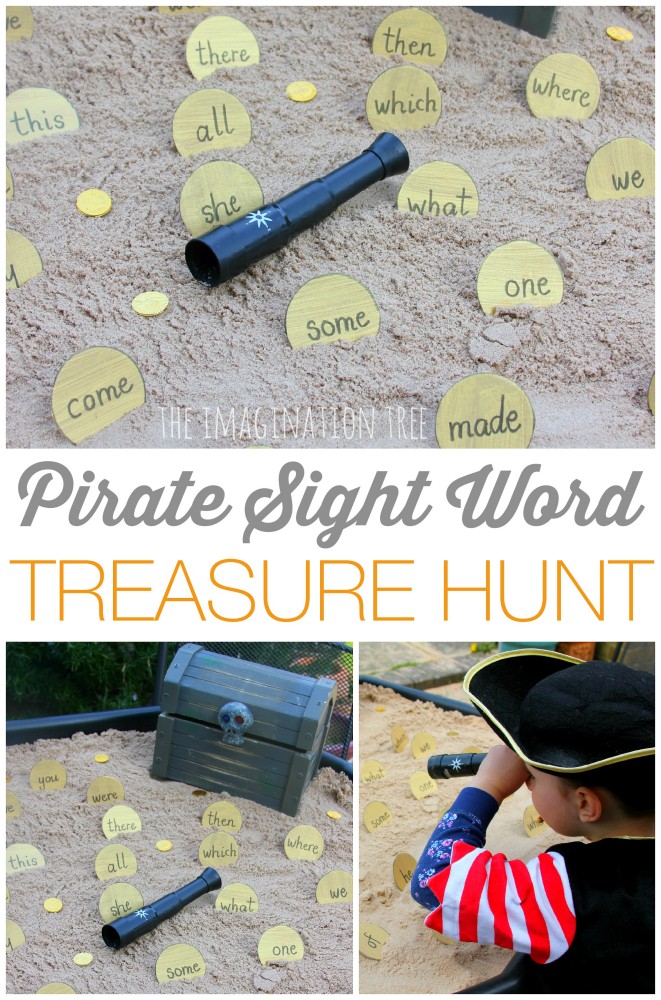 With my two eldest girls now able to read,  at their own stages, we are making more and more word games to engage them in the often repetitive task of sight word learning. Instead of reading from the cards or lists which can be very boring to do, we are making some hands-on activities to cement the learning in a more exciting way.

“Unless it has been in the hand ..and the body…it cannot be in the brain” (Bev Bos) and we all know that touching, moving and doing an activity is FAR more likely a way for us to remember it than simply watching or listening to it. 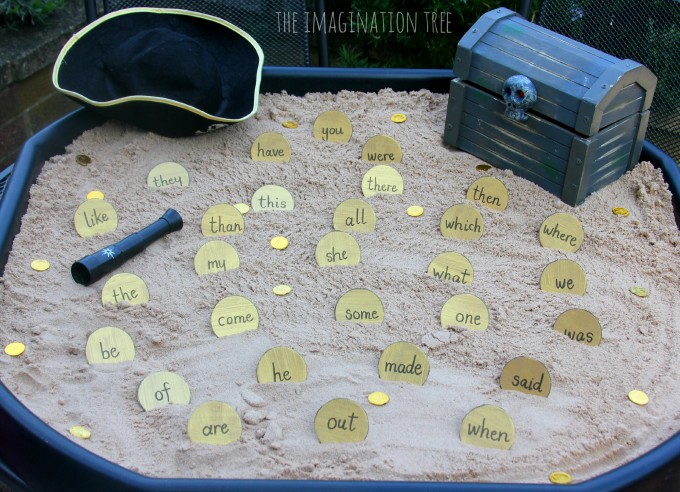 Tuff spot/Mixing Tray (these are AWESOME and I really recommend them for sensory play!)

I painted a large piece of cardboard with gold paint and left it to dry. Then I used a glass to draw around to create lots of circles for the gold doubloons. Onto these I wrote some of the high frequency sight words found on the KS1 list, the ones which Miss 5 is currently reading or about to be reading in her books, then I cut them all out ready to play. I deliberately included some really similar ones so that they would have to look closely to differentiate them all, e.g. “this, then, there, the”.

Into our Tuff spot tray I tipped a bag of play sand, then stood each gold doubloon word card into it, along with the empty treasure chest for collecting them into.

When they came to play they took it in turns to dress up in the pirate costume and use the telescope to do their searching for treasure! 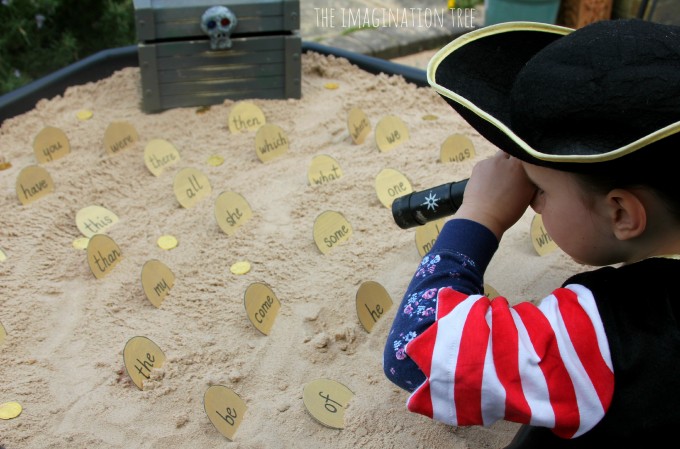 As the game began I explained that some pirates had hidden their gold doubloons and that we had to look for each one and put them into our chest before they returned! But we can only take the ones that we call out, so be quick and use your telescope to search for each one as I shout it out. 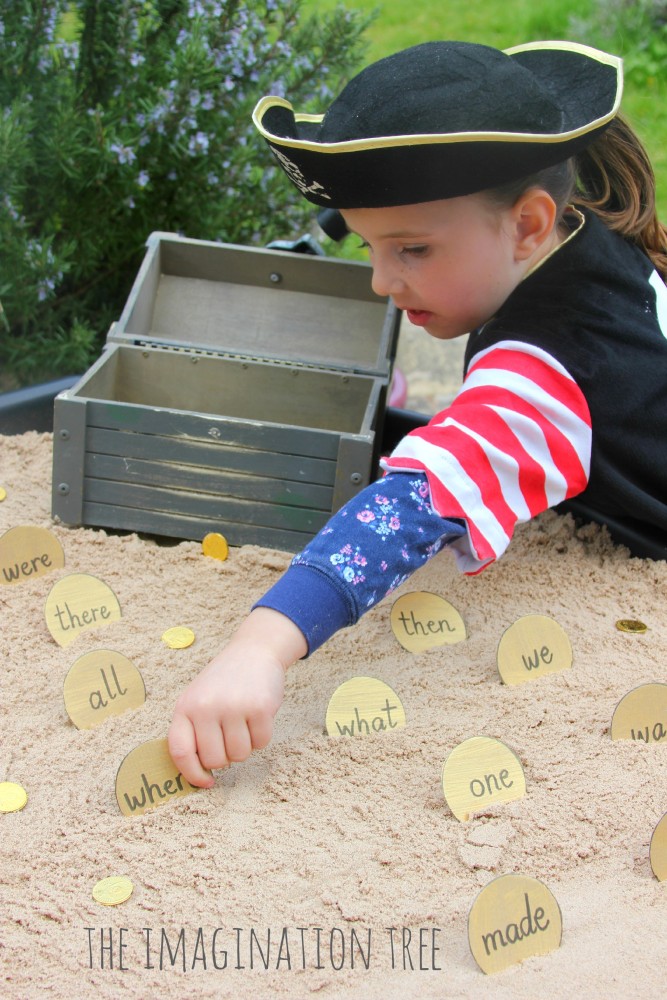 As I called each word, she would search through her telescope (and sometimes without it if she was struggling to find them) and then collect it to go inside her treasure chest. Once we had collected as many as we could find, she showed me what was in her collection and read them back to me again. 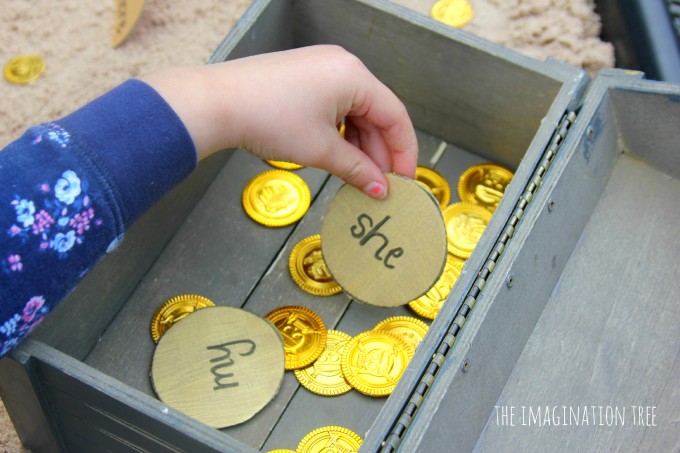 Miss 6 loved this game too and was able to complete it more quickly. I gave her the next challenge of trying to put some of the gold doubloon words into a simple sentence, which was fun to try and do together.

Little sister, Miss 3, also wanted to join in and we said “find a word with a S at the beginning” and then we would draw a “S” in the sand so that she could see what shape letter she was looking for. It would be good to make another set of cards for her with the letters on, so that she can start to learn the letter sounds too. 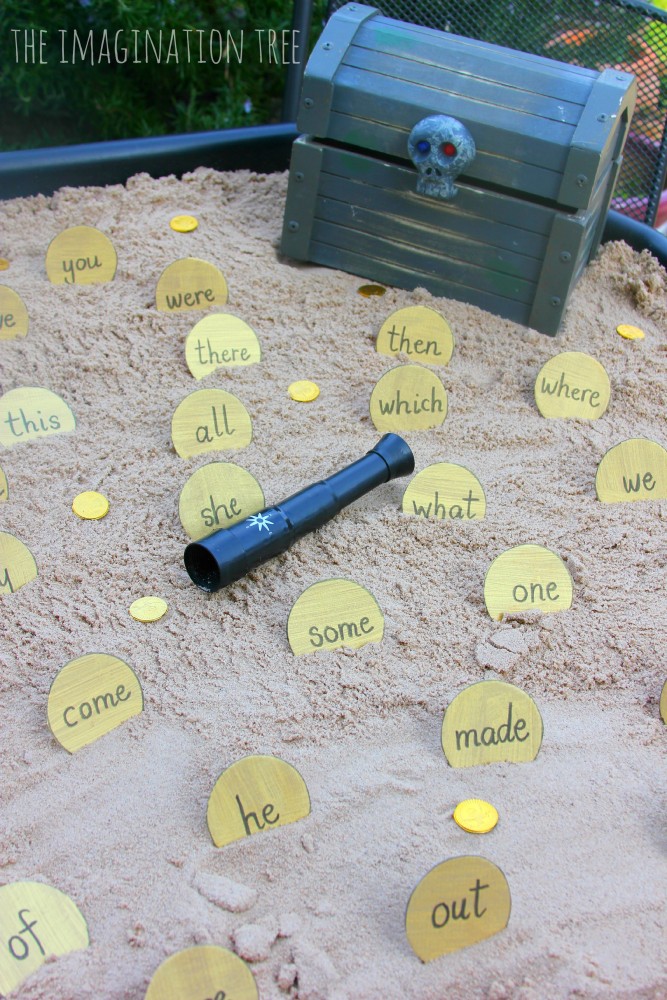 We have made another version of this using numbers which has been great for all stages of maths play and learning, and we will share that here soon!

And if you enjoyed the sensory nature of this play, we have a whole heap of SENSORY PLAY ideas too!

Physical: using all of their senses while they play

Creativity: dressing up and taking on a role or character, playing imaginative games

[This post contains affiliate links for your convenience. Thank you for supporting The Imagination Tree!]