We put together a story box so that we can retell the story of Little Red Riding Hood using puppets and story props!
Story boxes are a wonderful tool for young children and encourage a playful, fun approach to early story telling. They encourage creativity, imaginative play and a whole host of early literacy skills and are a wonderful resource to  pull off the shelf and play with, for both young and old children. 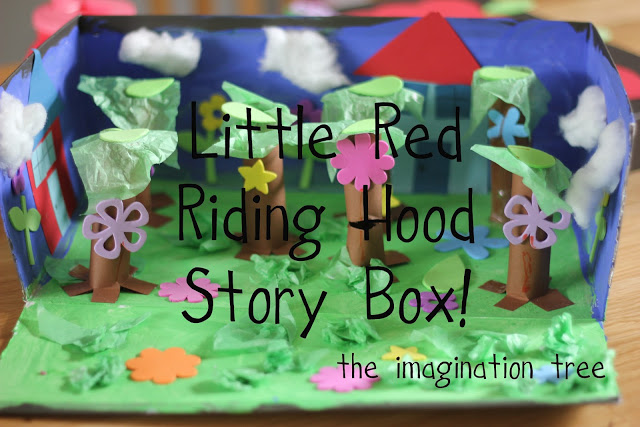 I am so excited that C. is now old enough to really get involved in designing and implementing her own creative activities. She chose the story to focus on and found some favourite finger puppets to go with Little Red Riding Hood. I introduced the idea of the story box and she was so excited to get started on it all by herself. 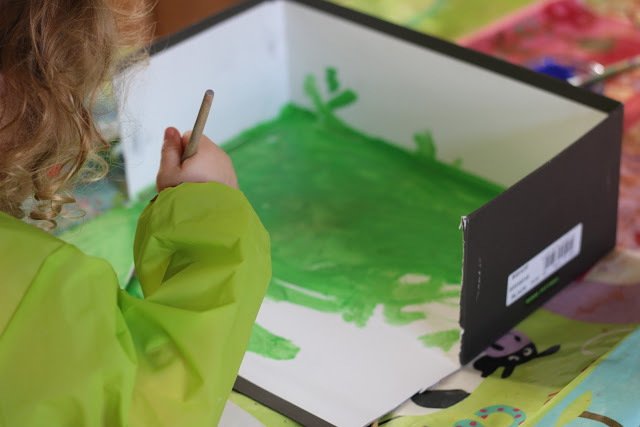 We got an old shoe box and I cut down two of the edges so that one side would flap open to create a stage-like scene. It can be folded back up and tucked inside the lid, ready to open out and be played with each time. 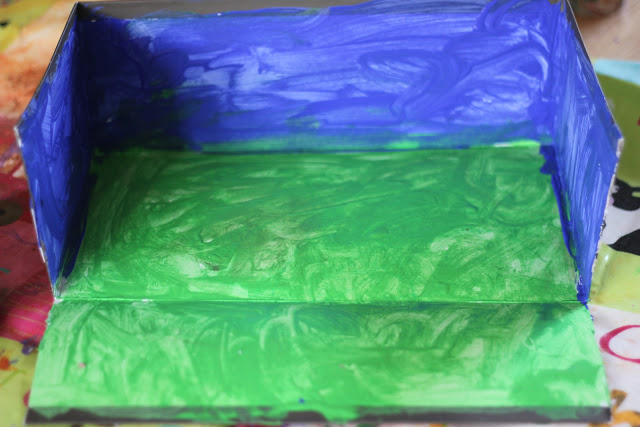 She painted the scenery first, with a green base for the forest floor and blue sky around the edges. 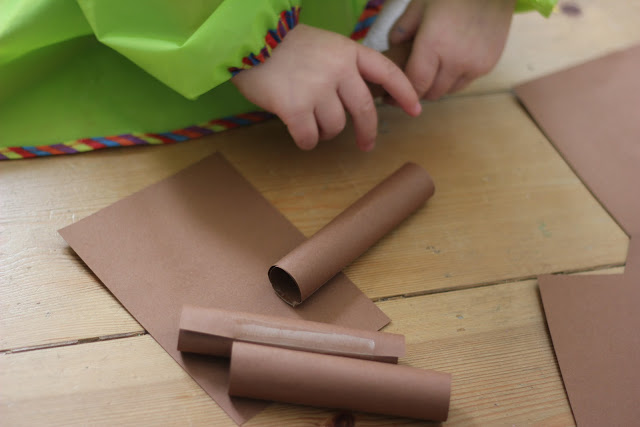 We discussed how we would add the trees and had a go at rolling them from brown paper. She quickly got the hang of it and did them by herself, with me just securing the tape in place for her. We cut around these with a few snips at the bases, added some glue and stuck them down to the forest floor. 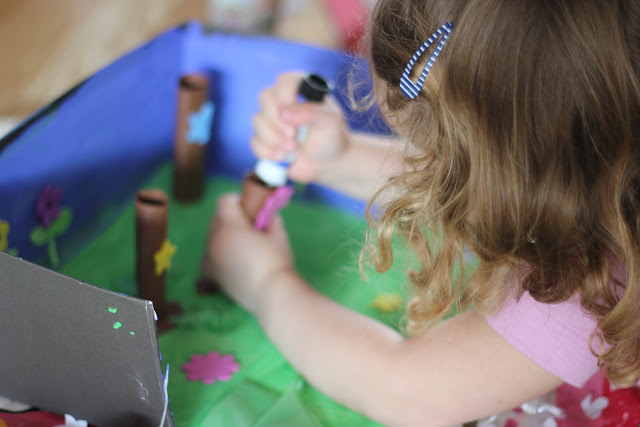 She chose to add flower foam stickers to the tree trunks (“the flowers are growing all the way up here!”) and then stuck many more all over the forest. 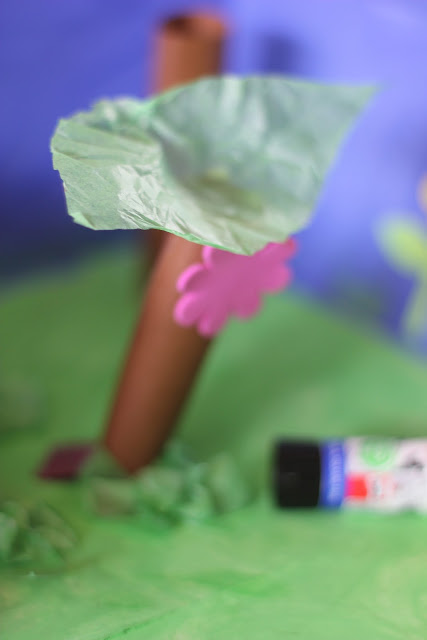 She found green tissue paper from her making basket and stuck pieces on top of each trunk with glue. Totally her own idea and they looked very effective! 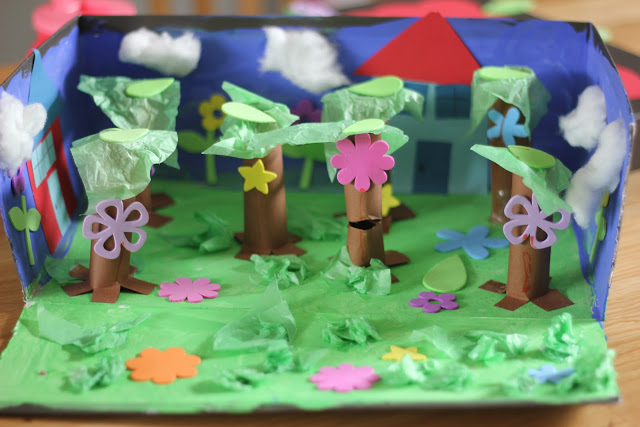 She asked me to make a house for Granny and one for Little Red Riding Hood. I cut some basic shapes for her to assemble so that I wasn’t making it for her. I gave her square, rectangles and large triangles and she stuck them together then added them to the forest where she wanted them. 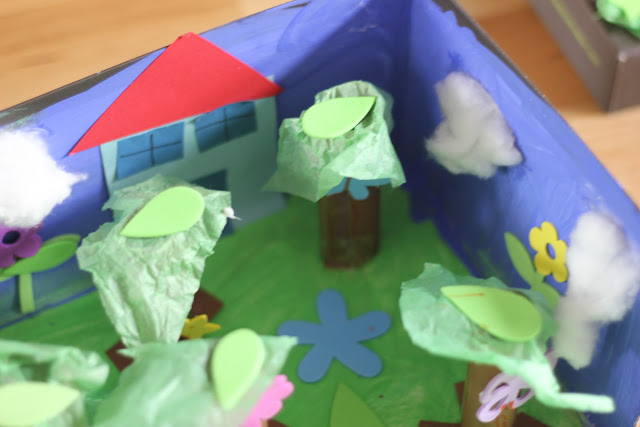 With a few more details added such as cotton wool clouds and scrunched up tissue paper on the grass she was finished! 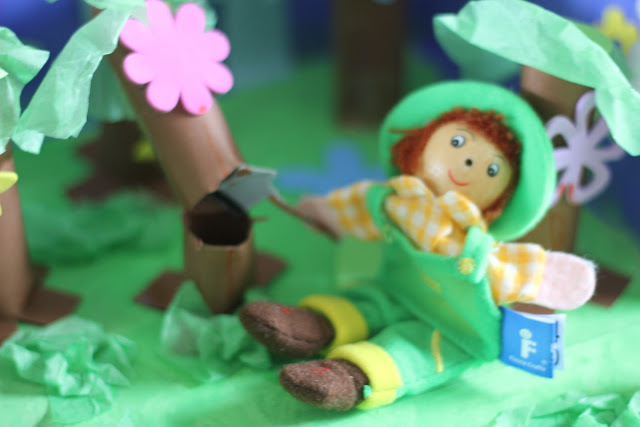 She fetched the finger puppets and then decided she needed to modify her creation by adding a “cut” to one of the trees so that the tree could be cut down by the woodcutter, then folded back up again ready for the next time the box was played with. I am in awe of her imagination here! A truly wonderful addition! 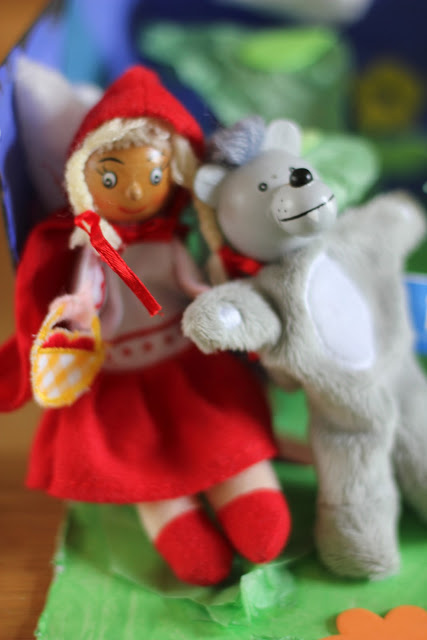 Together we told and retold the story, using the 4 principal characters. We took it in turns to be the main roles and each added in new elements whenever we told it. She needed me to model the story-book language the first couple of times, and after that she was totally confident in doing it herself. I am going to take a video of her telling the story very soon. 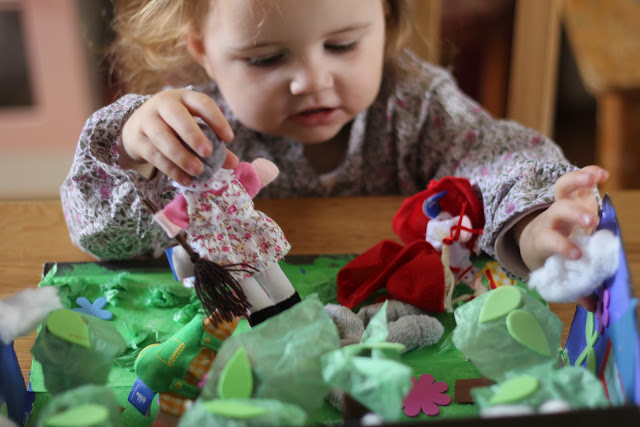 Little Sister watched as we told the story and was very keen to get involved (and also to try and sabotage the beautiful box itself!) After watching us she spent a long time holding the puppets and retelling the story herself, with all the words that she knows, making the puppets interact and changing the intonation in her voice as each one babbled away. Wonderful! 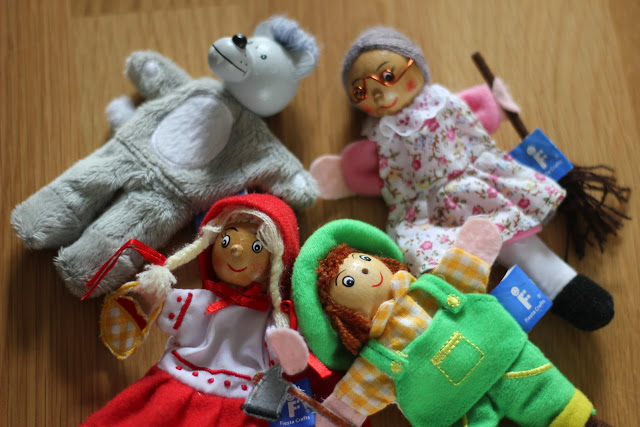 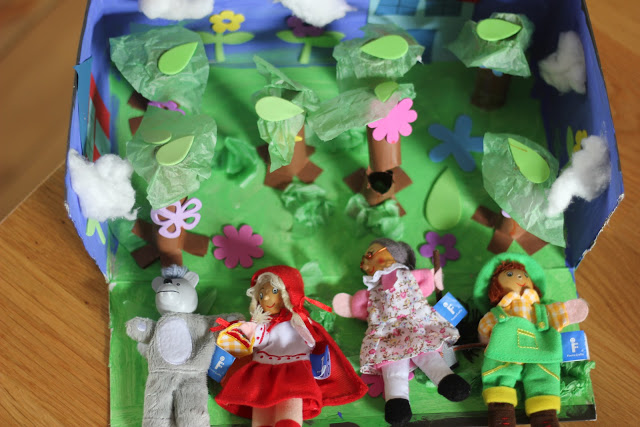 Once the play was finished we folded the side back up, put the puppets into the box and put the lid on. We are going to be making some more of these as soon as we can get some more shoe boxes! 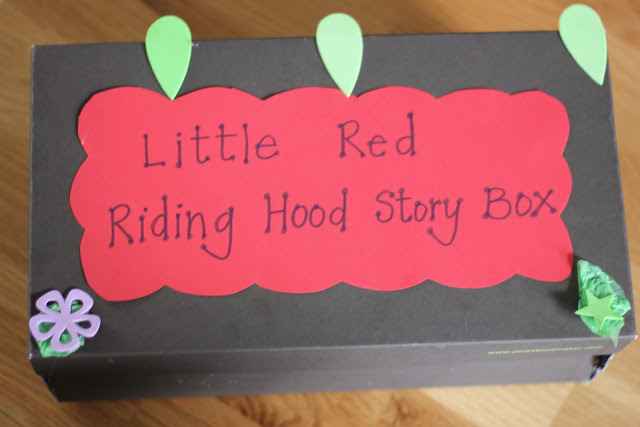