Make some Frozen themed play dough with sparkly loose materials for imaginative play and story telling. Perfect for all those fans of Elsa and Anna and the Frozen movie and for promoting playful literacy! 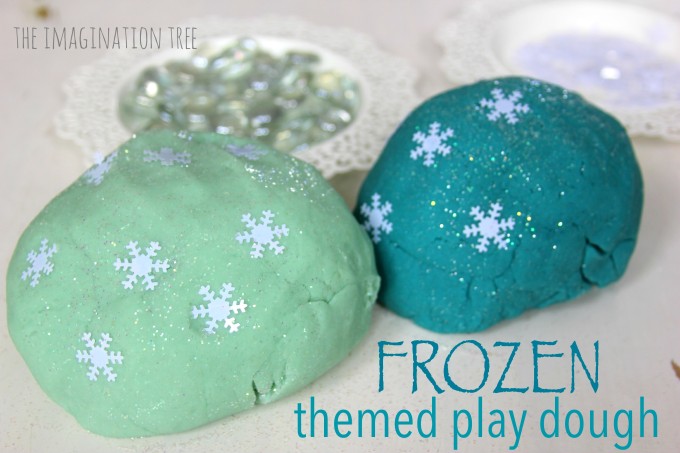 A little while back we made some clothes peg Elsa and Anna dolls and the girls have loved playing with them ever since in imaginative play and story re-telling of their new favourite movie, Frozen.

Using our usual, no-cook (and extremely quick!) play dough recipe, I made 2 batches of play dough to enrich their Frozen themed play. I coloured the first with half a teaspoon of blue Wilton Icing Colouring

and the other with less that a quarter of the same colour. This resulted in two different and very pretty shades of blue, similar to those seen throughout the movie.

Once they were done we rolled them in LOTS of fine white glitter  and they sparkled just beautifully. It is hard to capture just how sparkly and magical they looked using a camera, but they certainly appeared like they were covered in frost and ice! 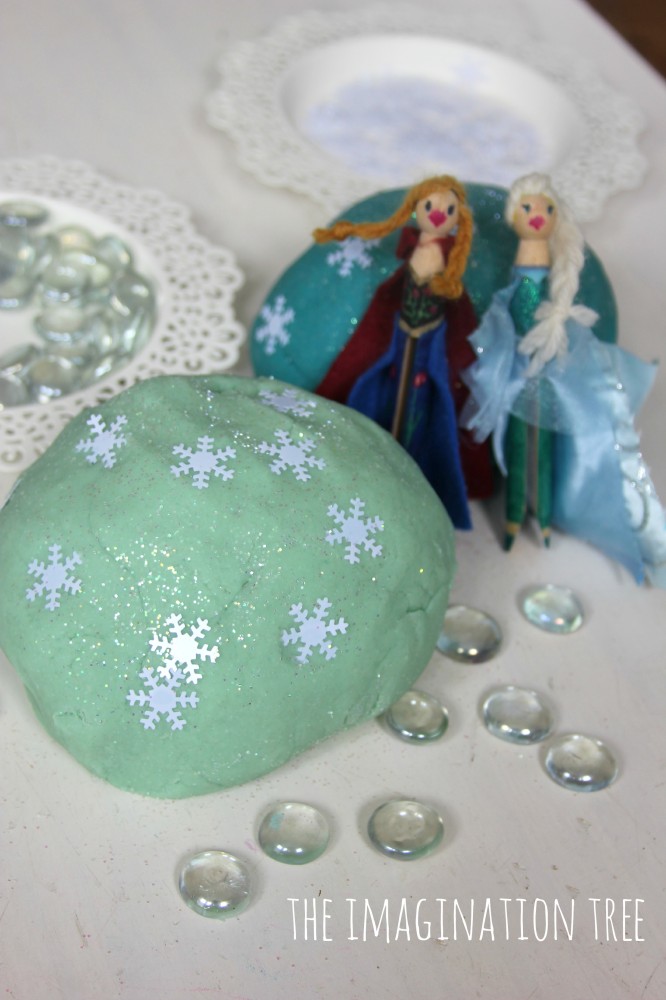 I set them out as an Invitation to Play, along with dishes of flat glass gems and snowflake sequins, along with the Anna and Elsa peg dolls themselves. The girls added a girl shaped cookie cutter and wanted to sprinkle more glitter, then the play and storytelling began in earnest. 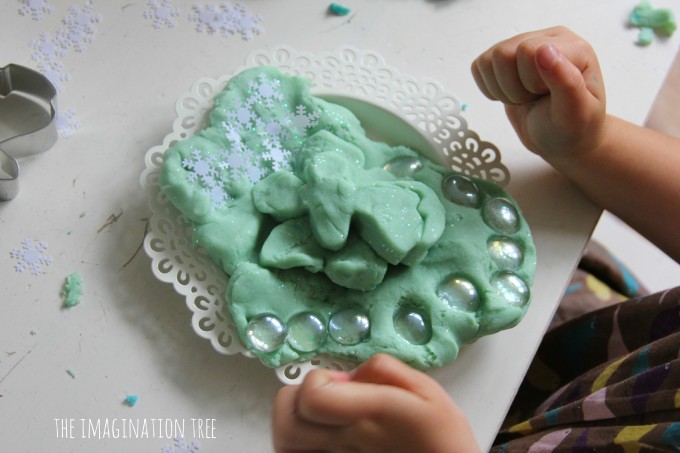 They used the doughs to create mountains, palaces, sheets of ice to skate across and simply to stand the figures up during play. 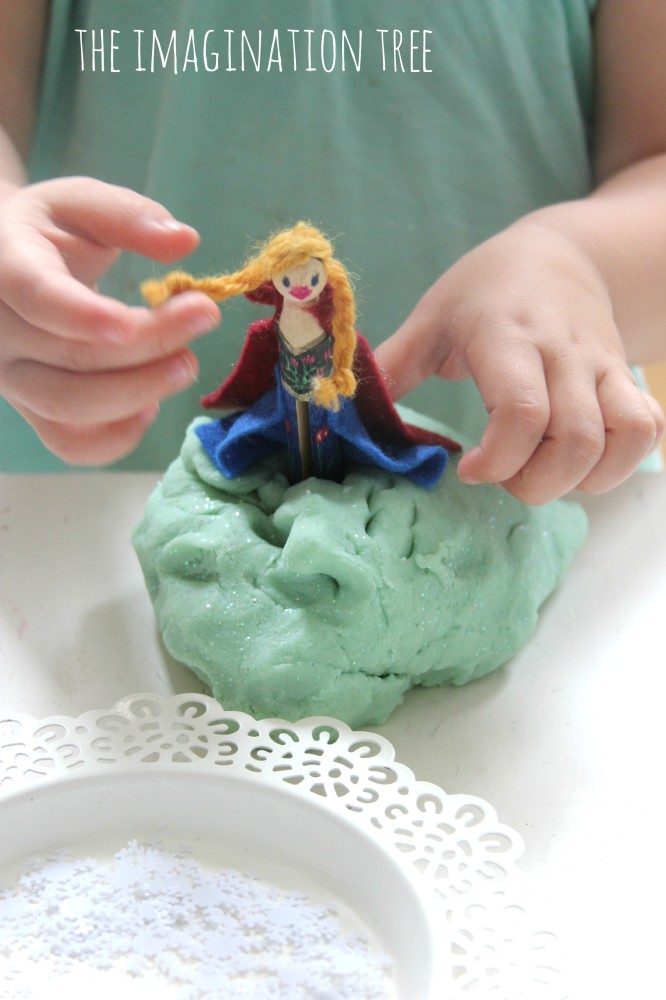 They decorated the doughs using the gems to represent ice and the sequins became falling snow around the scenes. They they cut out girl figures and decorated them using the embellishments, to make more representations of the characters. 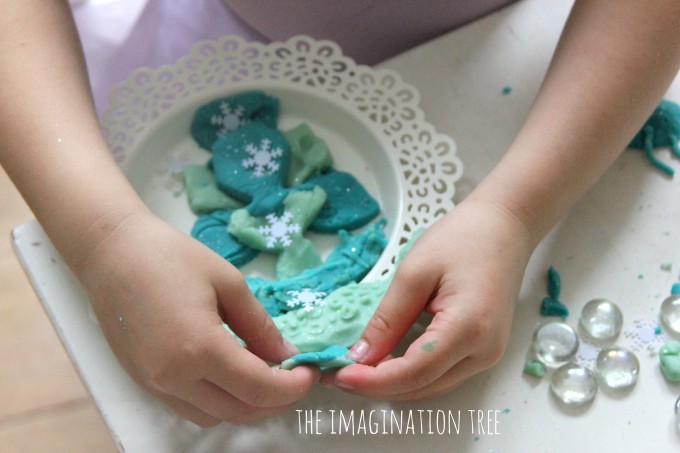 Miss 5 discovered that she could make a beautiful lacy pattern in the play dough by pushing it around the rim of the metal bowl, and added this bit by bit until she had covered the whole outside edge, which looked gorgeous.

When they were finished we picked out the gems and sequins, and stored them for another day, with the play dough stored in some air tight containers for next time. Where some of the two colours had been mixed together it actually made a lovely marbled effect and didn’t ruin the appearance at all. 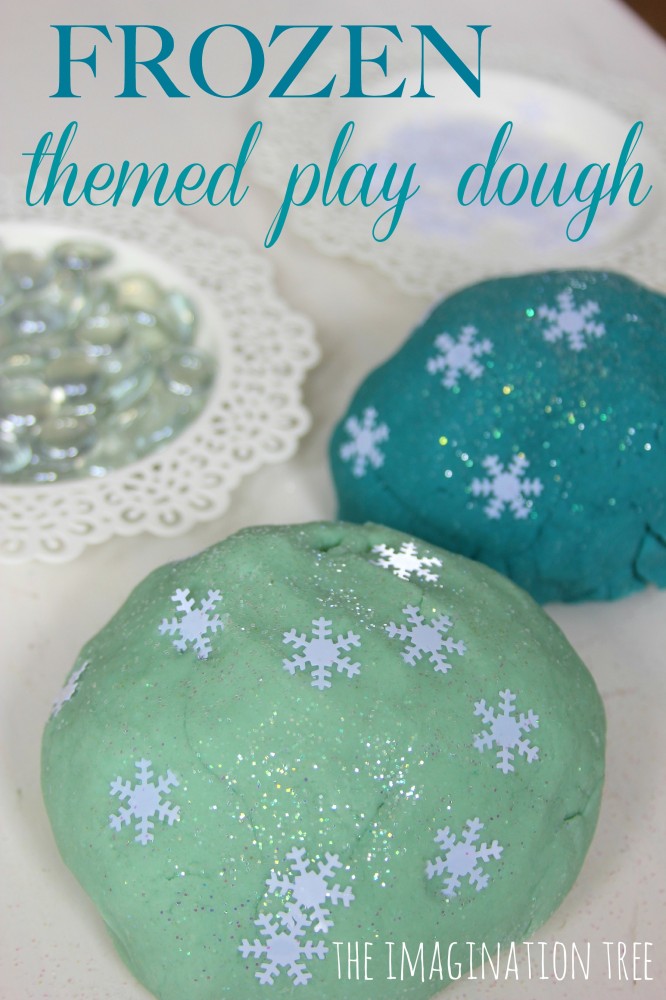 There’s another cute version of this activity over on Here Come the Girls where they use it to make Elsa’s dress too!

See our full play dough archives here for hundreds of other ideas!