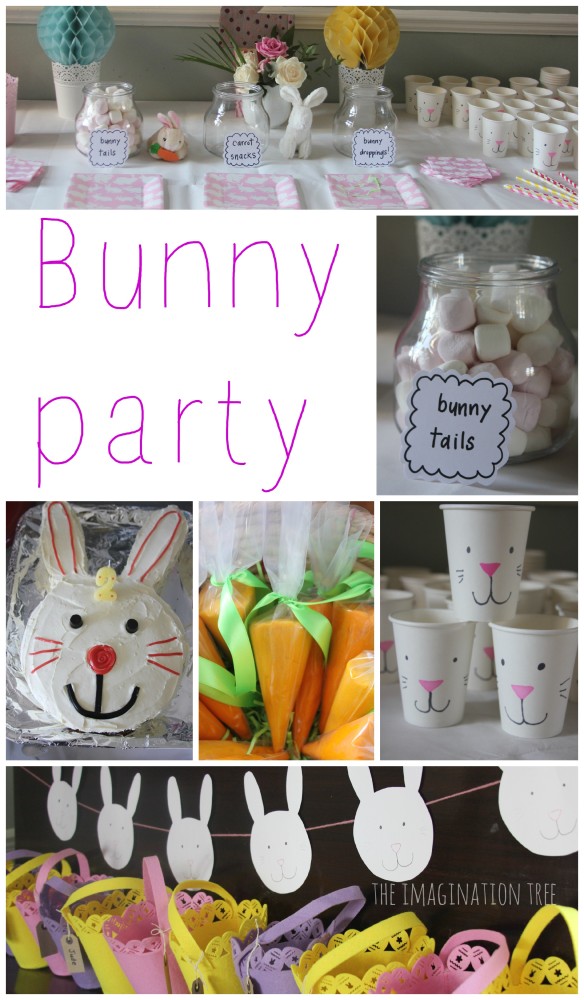 Little Bean turned 2 recently and she is in love with bunnies, so it seemed the perfect party theme for her to have!

Here are all the super-simple, DIY details for a bunny themed party for little ones at home. None of these items or ideas cost much or were too difficult to put together.

White card folded in half and cut to make a bunny shape face with details drawn on using Sharpie markers. Inside it read “Some-bunny is turning 2!” 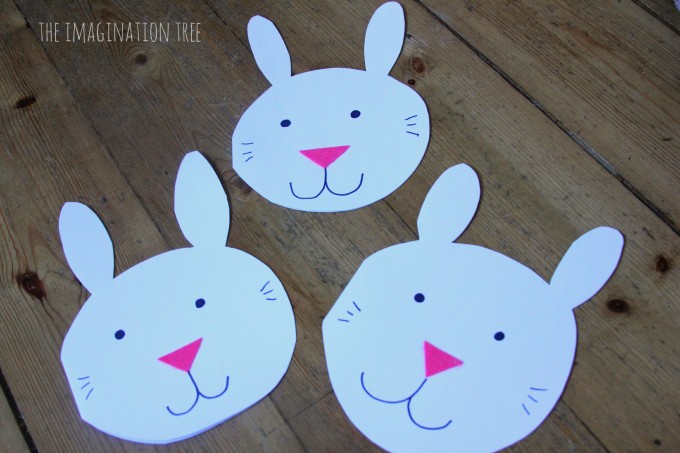 Around the rooms we had bunny bunting hanging up. This was made by cutting bunny shapes faces from card in the same way as the invitations, and taped on the back to some pom-pom yarn (£1 a roll from Tiger.) Balloons hung from the ends. 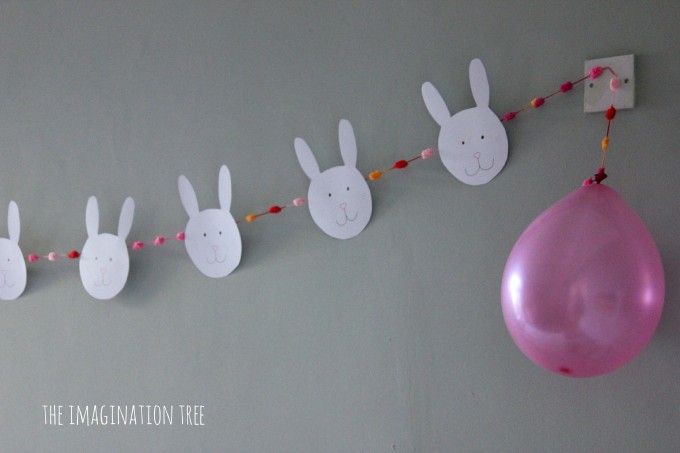 On the table were some honeycomb paper balls (Sainsburys) and a number 2 cut from a cardboard box and painted. 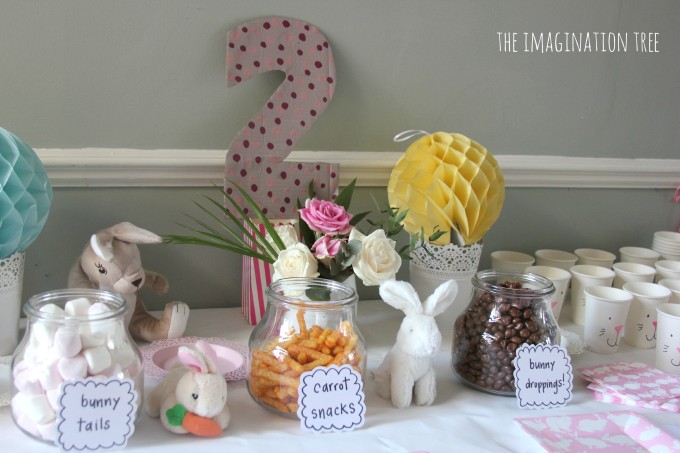 A giant bunny face from a cardboard box was painted and aded for more decoration, although it would also have been fun to play “pin the tail on the bunny” with too! 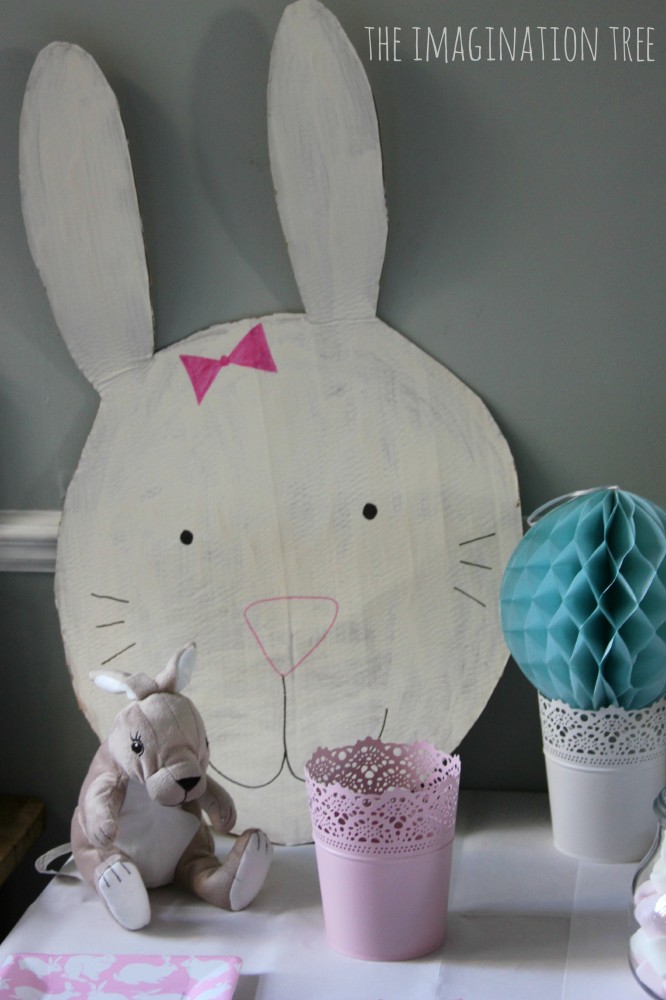 For snacks we had marshmallows as “bunny tails”, Organix carrot sticks as “carrot snacks” and chocolate covered raisins as “bunny droppings”! The last one was particularly popular, of course! The glass jars were £2 each at Ikea, as were the pretty pastel metal containers on the table. 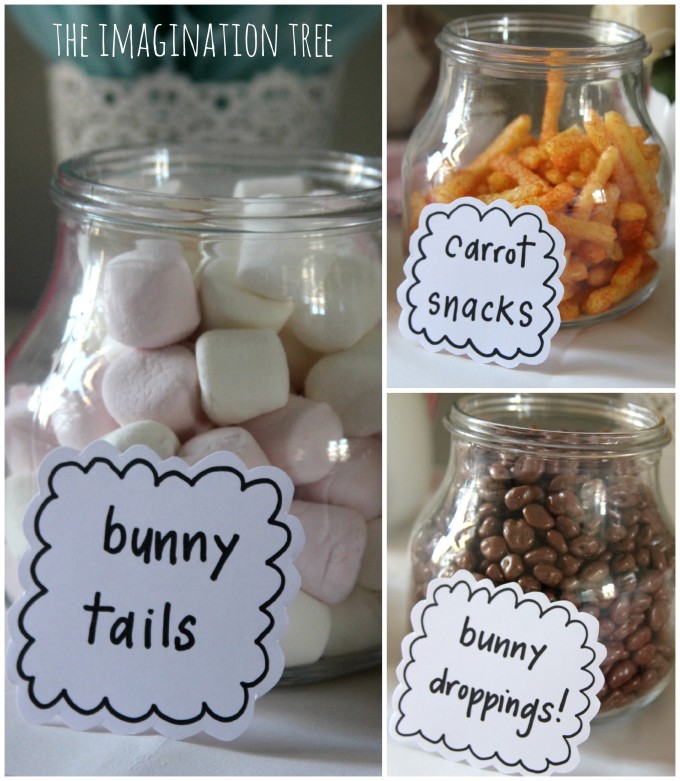 The cups for drinks were bunny themed  too, and would be adorable for Easter treats or egg hunts. 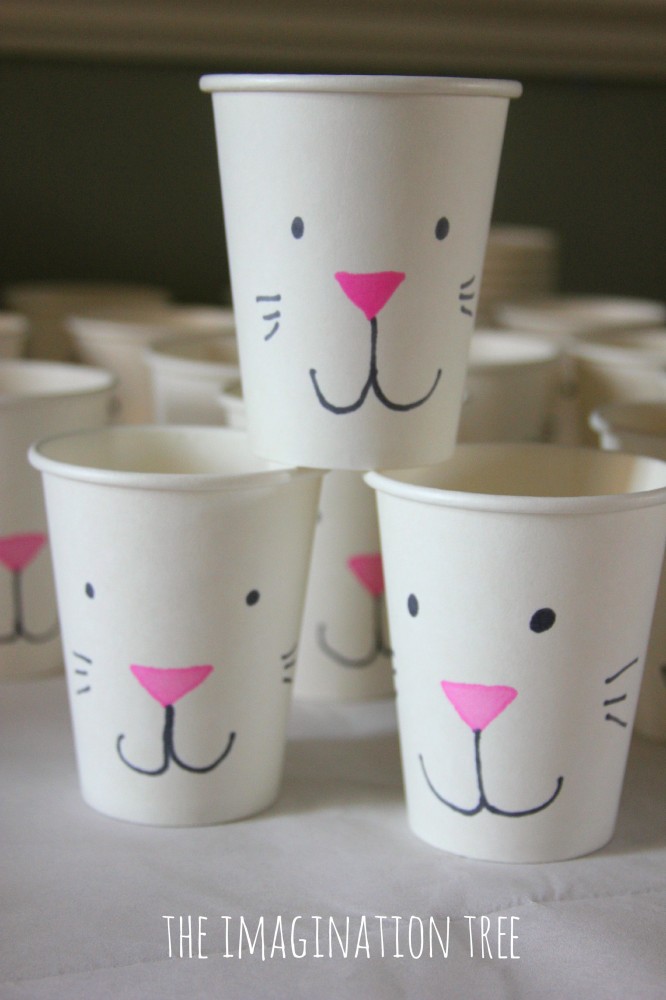 There were bunny shaped biscuits with the birthday girl’s name stamped on the front for them to decorate with icing and sprinkles.

The cake was a really simple one to create. I baked two round cakes and used one for the bunny face and the other for cutting two ear shapes out of. Then strawberry laces and liquorice were used to make the face details. 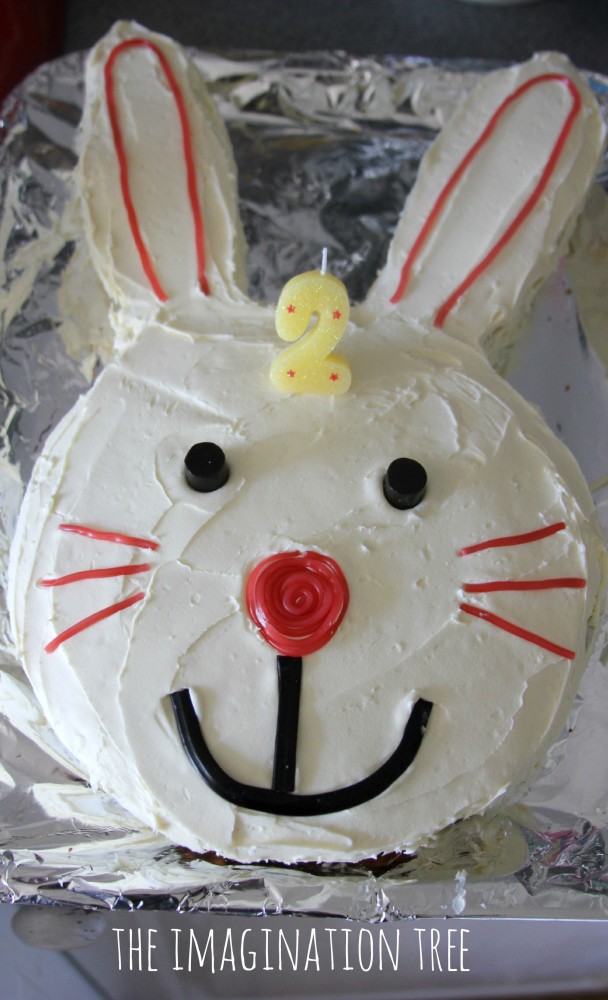 They all made their own bunny hat from card to wear throughout the party, which were simply white card cut into long strips with ears, and a face drawn on the front.

t was a lovely day so we were able to play some games in the garden. First they played a few rounds of “What’s the time Mr Fox?” and pretended to be bunnies bouncing up to the fox before he turned to chase them all.

Then we played hunting for “carrots” in the farmer’s vegetable patch before he found them! The carrot treat bags were £1 in Tiger and filled with sweeties, hidden around the garden for them to find. 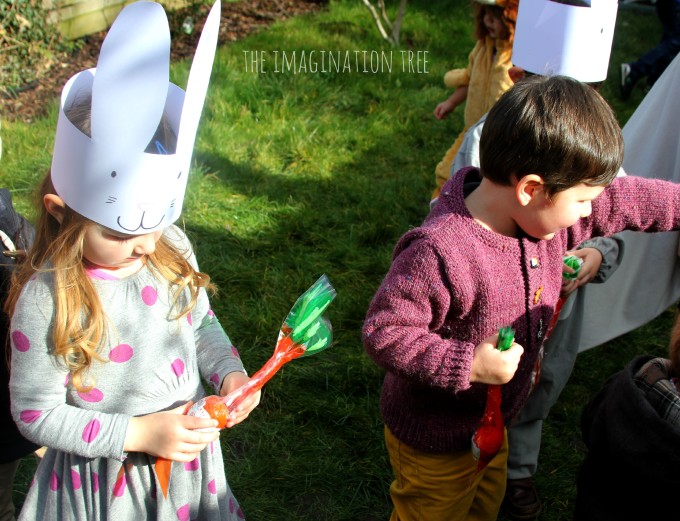 Bean’s favourite song is “See the little bunnies sleeping” so we played this lots of times inside. The children all lie down pretending to sleep and the adults sing:

Shall we try and wake them, with a merry tune?

Oh so still, are they ill?

As soon as they hear “wake up now” they jump up and hop about with wild enthusiasm!

If you don’t know the tune you can find it by googling it, and it’s a really lovely one to add to the repertoire for kids! 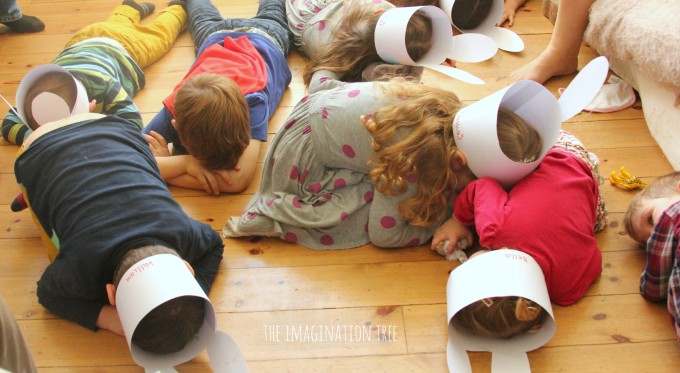 I made a tin foil and tissue paper bunny piñata for them to hit with a wooden spoon and once it was broken they scrambled for bouncy balls and lollipops to add to their take home buckets.

At going home time there was some carrot shaped play dough for everyone to take away! 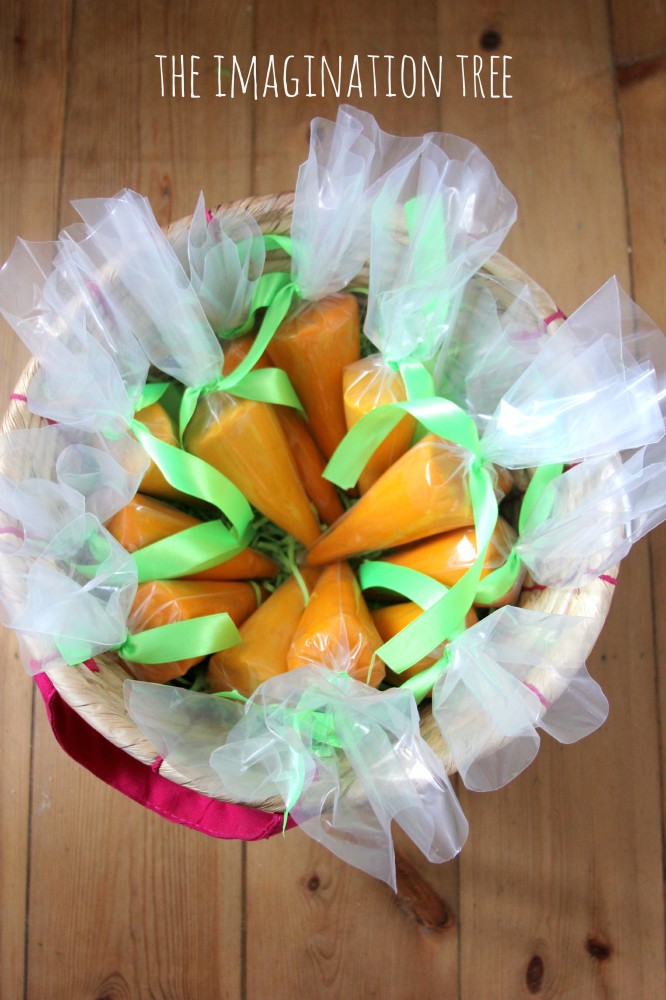 And a colourful fabric bucket with some other treats and goodies inside, with their names attached with a label. These were £1 each at Poundland. They’ll be great for using at Easter egg hunts next month too! 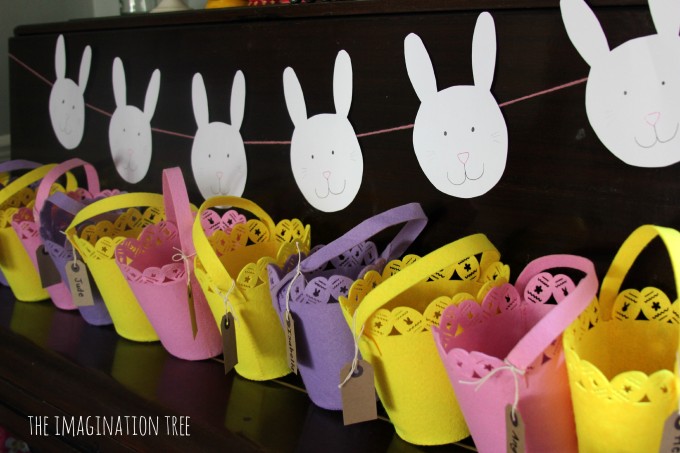 The birthday girl had a gorgeous little bunny onesie (which she only put on as soon as her guests went home!) She had a wonderfully bouncy and happy day with friends! 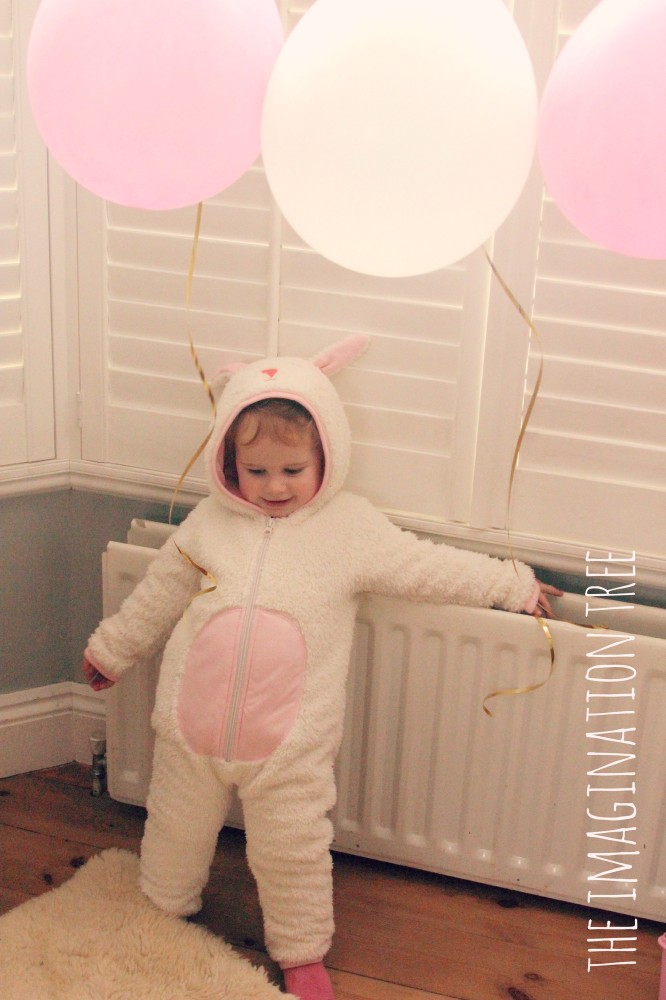 You can browse all our other kiddie birthday parties here!